Students at China Grove Middle learn about the Holocaust 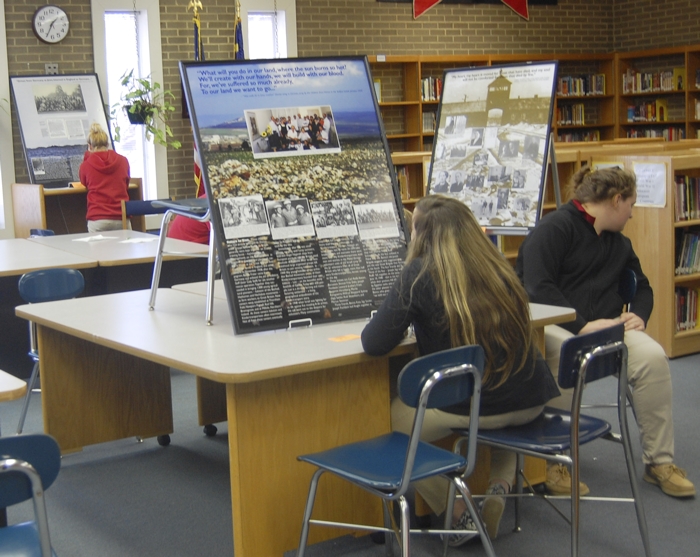 CHINA GROVE — Students at China Grove Middle School are now a little more knowledgeable about the events that occurred during the time of the Holocaust.

They learned about the Kindertransport through a traveling exhibit shown at the school from Jan. 28 until Feb. 5.

The Kindertransport was a series of rescue efforts that brought Jewish children out of Germany during the Nazi period between 1938 and 1940. Children were surrendered by their parents in order to keep them alive and free from Nazi attack.

Sixteen framed panels make up the exhibit that travels to public schools across the state. The panels include photos, quotes and other information detailing, in order, the timeline of events that occurred during the Kindertransport.

The N.C. Council of the Holocaust and the N.C. Department of Public Education teamed up to present the exhibit.

“The purpose of the exhibit is to raise student awareness of the Kindertransport, which is just another aspect of the Holocaust in its entirety,” Media Specialist Jane Woodward said. “We think of everyone dying during this time, which is not true. Even I wasn’t quite aware of this part of it.”

Students who viewed the exhibit were given assignments based on the information they learned. Terri Mills, an eighth-grade social studies teacher, assigned her students an essay to portray their views. Some teachers accompanied the exhibit with a video detailing specific experiences of Kindertransport refugees.

After seeing he Kindertransport exhibit, eighth-grader Eli Eason said it was “crazy and scary at the same time.”

“It’s really sad that the children had to be separated from their families,” eighth-grader Gabi Burgess said.

“I’m surprised on what I learned from the exhibit. I want to keep learning about it,” eighth-grader Joyce Ortega said.

The exhibit will travel to North Rowan Middle School within the next few weeks in order to continue educating students about the events of the Holocaust.