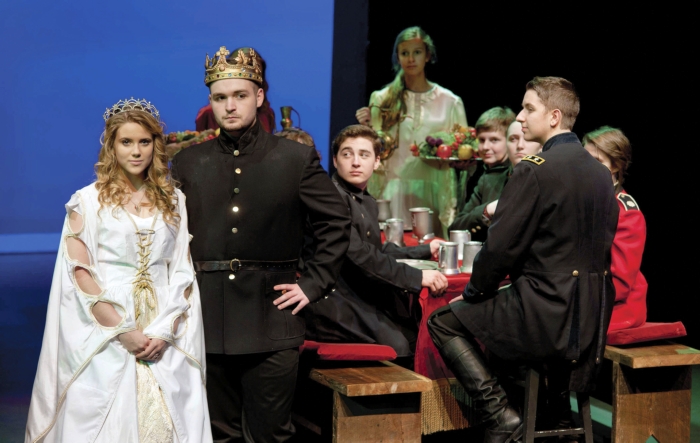 The Scottish Play (better known as “Macbeth”) is one of Shakespeare’s darkest and most powerful works. Set in Scotland, the play the tragic effects of one man choosing evil as a way to fulfill his own ambition for power.

“Macbeth” is Shakespeare’s shortest tragedy, and tells the story of a brave Scottish general named Macbeth, played by Austin Young, who receives a prophecy from three witches that one day he will become King of Scotland. Consumed by ambition and encouraged by his wife (Amery Barton), Macbeth murders King Duncan (Eli Duncan) and takes over the throne. Consumed by guilt and paranoia, he soon becomes a tyrannical ruler and is forced to commit more and more atrocities to protect himself from suspicion. The consequent civil war takes Macbeth and Lady Macbeth into the realms of arrogance, madness, and death.

Over the course of many centuries, the character of Macbeth has attracted some of the world’s most renowned actors, including Patrick Stewart, Ethan Hawke and Orson Welles, to name a few. It has been adapted to film, television, opera, novels, comic books, and other media.

Why is “Macbeth” called The Scottish Play?

“Macbeth” is filled with mystical imagery and allusions of the occult and as a result many theatre people believe that the play is cursed, and will not mention its title aloud, referring to it instead as “the Scottish play.”

This is because Shakespeare is said to have used the spells of real witches in his text, angering the witches and causing them to curse the play. To say the name of the play inside a theatre is believed to doom the production to failure, and perhaps cause harm to the cast members. There are stories of accidents, misfortunes and even deaths taking place during runs of “Macbeth.”

While many today would say that any misfortune surrounding a production is mere coincidence, here are a few popular ways to dispel the effects of the curse just in case you slip up and say the dreaded “M-word” while inside the Norvell Theater.

• Spin in a circle three times and spit over your left sho-ulder. (Please go outside before performing this ritual.)

• Leave the room, knock three times, wait to be invited back in and once inside quote Hamlet: “Angels and ministers of grace, defend us!”

The Scottish Play is produced by Edward and Susan Norvell and is PPT’s 8th grade school show. All county 8th graders will be bused in to see the play from Feb. 18-20.