Railroad crossing closure inconvenient for some on Klumac Road 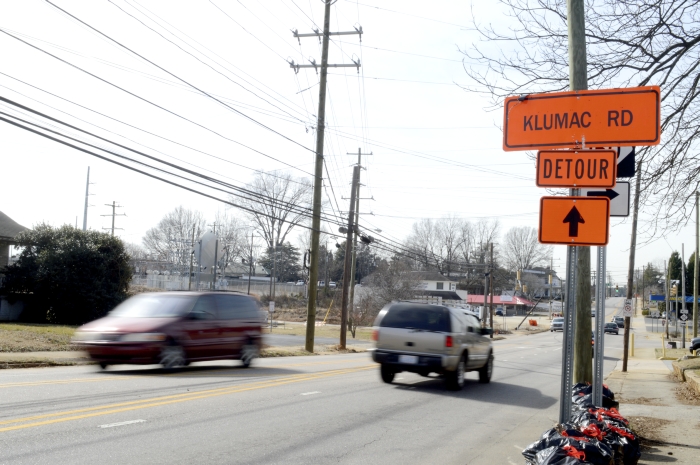 Josh Bergeron / Salisbury Post - Cars zoom past a detour sign that directs traffic around a closed portion of Klumac Road. The road, closed since 2013, is scheduled to be permanently closed, with a new road being built several hundred yards to the south.

As work continues to reroute a portion of Klumac Road, businesses have mixed reactions about how a road closure is affecting business.

The road is nearly two-thirds of the way to its projected Oct. 2016 deadline. First closed in May 2013, the multi-million project is aimed to eliminate Klumac’s Road’s at-grade crossing with the railroad tracks.

When the project first started, the Department of Transportation said separating vehicles from trains would greatly reduce the potential for accidents and help traffic flow more efficiently. Accidents involving non-drivers, such as one that happened Tuesday night where 50-year-old Jeffrey Wayne Hooker was killed by a train while riding his bicycle across a crossing on the 100 block of 11th Street and Lexington Avenue, could also be prevented.

At the time of Klumac’s closing, about 4,300 vehicles drove over the railroad crossing per day. Similarly, 40 trains passed the crossing each day at the time of the closing, according to the department’s numbers.

With the road closed, some businesses on Klumac say they aren’t seeing large changes in business-related traffic.

Insurance agency owner Darrell Elium, whose business is at the corner of Klumac Road and Martin Luther King Jr. Avenue, said the closing has resulted in no change at all for either his customers or his employees.

“It’s really not been an issue because of our location,” he said. “We’re right on the corner and easy to get to. There is a lot of traffic that came through Klumac Road, so I can understand the need to keep a Klumac Road, but the same traffic goes out on Jake Alexander and all the traffic ends up going somewhere.”

Elium said the rerouting may have been a good idea because of the messy five-way intersection Klumac Road previously shared with South Main Street.

Though Elium’s business hasn’t changed, Kim Lowder, who works at Nu Wave Salon on Klumac Road, said the closing is an inconvenience for some of her customers. The salon is located about two blocks south of Elium’s agency.

“I had clients that lived on (N.C.) 150 and they could just cut through, but now are taking Main Street because they don’t want to deal with the traffic on Jake Alexander (Boulevard),” Lowder said.

She added that some customers often ask if the road will ever reopen.

“It’s an inconvenience for us as far as running errands,” said Sheila James, who also works at Nu Wave. “If you’ve got to get on that side of town, you’re kind of stuck going all the way around. It’s a booger.”

Richard Haff, a Department of Transportation engineer overseeing the Klumac Road project, said construction is still on schedule to wrap up in October 2016. Construction crews are currently working on the new portion of Klumac Road, which is a couple hundred yards south of the original crossing.

The original crossing has been completely removed from the railroad tracks. Haff called the Klumac reconstruction a “linear project” meaning that certain parts of the project have to be completed in order.

Faith Board of Aldermen to meet Tuesday