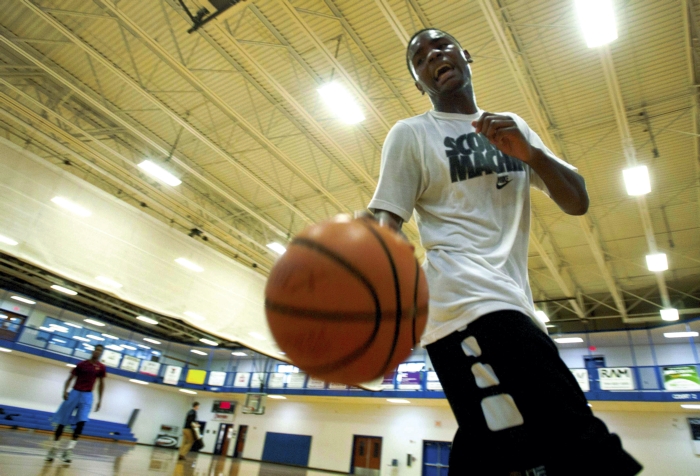 JON C. LAKEY / SALISBURY POST Donel Simmons (right) plays one-on-one with his teammate Aaron Davis Jr. at the Hurley YMCA. Robert Knotts coaches a team of young men that have hopes of furthering a basketball career but have struggled academically. The young men , many of whom live outside North Carolina, are enrolled in the Elite Skills Basketball Academy are staying in Salisbury and use the Hurley YMCA as a place to practice basketball and study. Tuesday, February 10, 2015, in Salisbury, N.C.

SALISBURY — Donel Simmons and Aaron Davis Jr. had been going at it about an hour. This was their third one-on-one game, and the trash-talking had become amplified.

Alternating positions under the basket and near the sidelines, teammate DaqJuan Lee was shooting cellphone video of the hotly contested matchup. Others, including head coach Robert Knotts, also had stopped to watch.

“He’s not going to touch the ball anymore,” Davis announced after Simmons missed a shot and he grabbed the rebound. Davis proceeded to hit three driving layups and a three-pointer.

“Uh-oh, here comes the ‘D'” Knotts said, as Simmons moved up and tried to clamp down on his opponent.

Davis missed a fadeaway in the lane, and the game was still on.

Simmons, Davis, Lee and nine other young men have come from all parts of the Eastern Seaboard this school year to attend Knotts’ Elite Skills Basketball Academy, which is in its first year. Only two of the players are from North Carolina, while the rest hail from states such as Ohio, Maryland, Florida, Georgia, Pennsylvania and Tennessee.

Knotts tries to create for his players the same kind of routine and environment they might find at a Division I, Division II,  junior college or NAIA school. They have close to a 30-game schedule, practices, film sessions, skills training and workouts. They live, eat and study together.

Some of the players are taking up to 12 credit hours at Rowan-Cabarrus Community College, while others are beefing up their high school grade-point average with NCAA-approved classes online.

The unusual aspect of Knotts’ academy is that his base of operation is the J.F. Hurley Family YMCA in Salisbury. His team, the Disciples, practices here in the afternoons. It plays its home games in the Y’s gymnasium, and all the players’ strength training also relies on the Y’s modern equipment.

“It’s been a great working relationship,” said Jesse Byrd, director of sports at the Y. “… The guys were incorporated into what we were already doing. It has kind of added to our programs, to be honest with you.”

The academy pays a fee for use of the Y facilities. The players themselves receive a discounted Y membership, so they participate in things such as spin, yoga, Pilates and aerobic classes, while also helping out with duties associated with youth basketball leagues.

“They’ve really become part of our family here,” Byrd said. “A lot of members have really gotten behind them.”

The players eat lunch at a nearby Subway and belly up to the dinner buffet at Ryan’s Steakhouse. Knotts and the players live at Castlewood Apartments, just down the road from the Y and travel to games together in a van.

A former assistant coach at the Division I and II college levels and at Ledford High, the 35-year-old Knotts played on a state 2A championship team at Thomasville High School, then was an all-conference player at Ferrum College (1998-2002).

He said a main focus of his Elite Skills program is academics.

Some of the players he is coaching have never taken an ACT or SAT test for college or know how to go about it. They don’t have the high school grades to get them into the next level of play, and likewise many of the players haven’t had the exposure to coaches who might see them as a fit for their programs.

A few of the guys have what they need academically, Knotts said, but they are trying to grow stronger and improve their basketball skills. Knotts networks and promises them exposure, pushing game film out to coaches or inviting them to practices and games.

The schedule is filled with games against community colleges, junior colleges and other preparatory academies. They often play in high school gyms and recreation centers so, in comparison, Knotts touts his academy has having better facilities for the players to use.

How many prepatory program can say they have Olympic-sized pools, climbing walls, saunas, internet cafes and the like.

“They do a great job here,” Knotts said of the Hurley Family Y.

As reflected in the team name, Knotts promotes the academy as offering a Christian environment, which fits in with the Y’s mission. He said he first had a dream for this kind of program back in  2007, but it took seven years to reach fruition.

“God opened a lot of doors to get this program started,” he said.

Knotts said he was searching up and down Interstate 85 for a home for his program when he attended the 2013 Christmas high school basketball tournament at Catawba College in Salisbury.

“Jamie, Jesse — the entire staff is a blessing to our program,” Knotts said.

Helping Knotts with the academy as assistant coaches are Cardes Brown, Anthony Hinton and David Krider.

“It’s a very good experience,” said Davis, who played high school basketball in the Baltimore area. “It makes everyone better as a player. We work every day, and I think we’re all going to be mentally and physically ready for college.”

Davis acknowledged that coming to Salisbury was difficult at first, because of how quiet and small the town is compared to what he is used to. On the academic side, he said he is equivalent to a high school senior, as he keeps taking the courses he needs online through National High School.

A point guard, Davis thinks he could be a high-level Division II player right now and possibly a Division I player down the road. It might mean coming back to Knotts’ academy next year.

“You really got to be motivated,” Davis said.

Junior Desinor, a 17-year-old player from Miami, said he is on track academically as a high school junior who also may be returning to Salisbury in the fall. Desinor said eight Division I schools have made inquiries about him, and he already has two offers to play for Division II colleges.

Desnior said the structure of Elite Skills Academy and being away from home were hard at first, “but I’m just so used to living here now.”

LeMontre Smith, a point guard from Akron, Ohio, already has an offer to play for Jamestown Community College in New York.

“It’s a big change,” Smith said of living in Salisbury. “I don’t know anybody but my teammates. I had never left home, but you have to grow up sometime.”

Smith is taking online classes in English, French and pre-algebra. Before studying, he is often at the Y between 8 and 9 in the morning, lifting weights and going through ball-handling skills.

The players sometimes use the chapel at the Y as their study hall.

The Disciples had light workouts Tuesday in preparation for a game Wednesday against M.A.C.K. Prep in Charlotte. Simmons and Davis took advantage of the break to go all-out in their one-on-one matchup in the Y gym.

Davis claimed victory in the end.

“It took him all day to beat me,” Simmons protested, as Lee kept videoing. “I’m top of the mountain. I’m the greatest.”

Basketball is basketball, whether you’re playing in Madison Square Garden or at the Y in Salisbury.