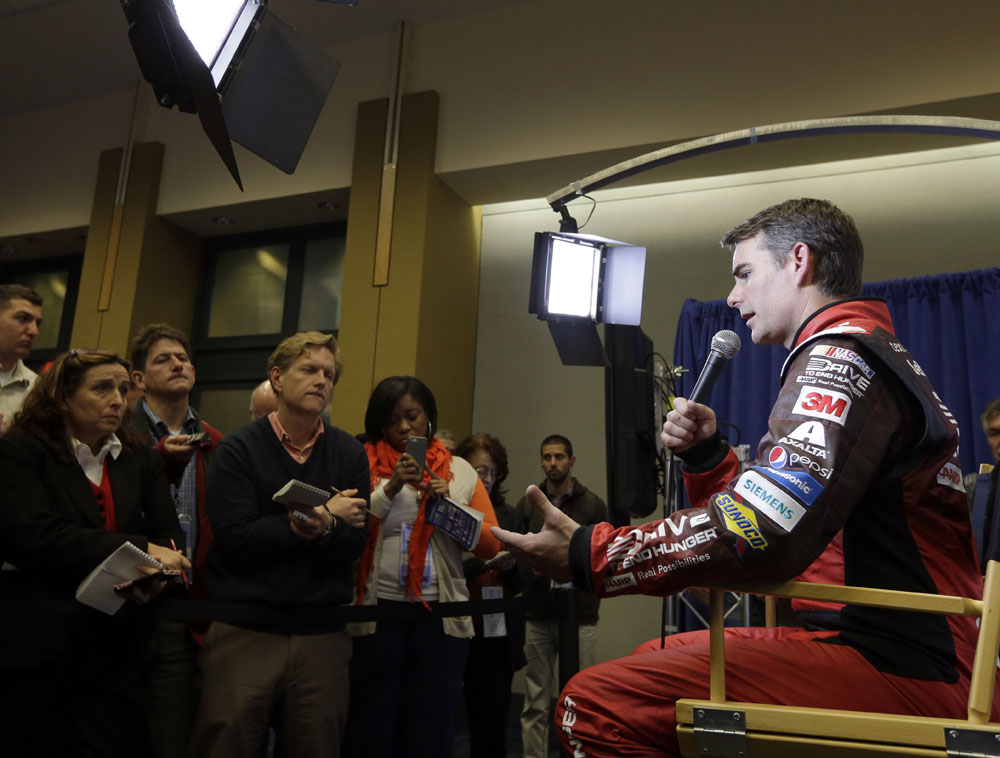 The Associated Press Driver Jeff Gordon speaks to the media Jan. 29 in Charlotte during the annual media tour in Charlotte. Gordon announced this will be his last full-time season in NASCAR's top series.

DAYTONA BEACH, Fla. (AP) — Through driver changes, network shuffles, a new championship format and NASCAR’s push to reinvent itself, the one constant for more than two decades has been Jeff Gordon behind the wheel every week of the iconic No. 24.

Well, it’s time to buckle up for what’s going to be Gordon’s final ride.

The four-time NASCAR champion will report to Daytona International Speedway this week to begin preparations for his final season-opening Daytona 500. Gordon said last month he will give up full-time driving at the end of 2015, and while he didn’t rule out racing a little in the future this will be his final appearance in the “Great American Race” that kicks off the season Feb. 22.

It will be the beginning of what will surely be a NASCAR season packed with tributes to Gordon, whose storied career includes pushing the sport into mainstream visibility.

Gordon does not want the focus to be on him every week for 38 races. He doesn’t want it to become a sideshow.

“I am concerned about it. The statements and comments and accolades have already been overwhelming,” he said. “But I want to race hard and be competitive and be focused at the race track. We’re trying to do all that we can to talk to the tracks and talk to NASCAR about how we can maintain that level of focus.”

Gordon has already offered to return to race tracks in 2016, when he’s out of the car, to help with any tributes.

“I’m not going anywhere. I’m going to be here,” he said. “And it only makes me sense for me to commit to the fans and the sport for all its given to me, and I can’t do that when I’m trying to be focused on the track.”

Gordon has all the ingredients to top last season, which saw him come oh-so-close to a fifth championship. He won four races and was one of the strongest drivers all year, but a sequence of events in the third segment of NASCAR’s new elimination-round playoffs knocked him out of title contention.

He will need to be just as good this year to have a shot at reaching the finale in Homestead, where four drivers will race for the Cup.

The title last year went to Kevin Harvick, who put together a brilliant first season with Stewart-Haas Racing. Harvick and crew chief Rodney Childers were the class of the field all year, and their hard work was rewarded with the championship that team co-owner Tony Stewart promised to deliver if they moved to SHR.

The Chase format contributed to one of the most competitive seasons in recent memory and gave NASCAR momentum for the first time in years.

Now all those drivers who lost the title to Harvick are eager to get rolling again.

Brad Keselowski and Joey Logano, who made Team Penske a two-driver threat last year, are expected to be just as strong this season. The only issue is if Keselowski, who sparred with many drivers last season, will be able to just race and set aside his off-track concerns.

The lineup is different at Joe Gibbs Racing, which expanded to a fourth team by adding Carl Edwards. There was also an offseason crew chief overhaul in which only Matt Kenseth’s team remained intact. Not even Denny Hamlin, who came one caution away from perhaps beating Harvick for the title, was immune. Crew chief Darian Grubb was moved to Edwards’ new team.

At SHR, where Harvick was the one constant all season, teammates Danica Patrick and Kurt Busch will be looking for results. And Stewart? Well, his swagger seems to have returned after two trying seasons that included the end of his 15-year winning streak last November. An offseason surgery has the three-time champion walking without a limp for the first time since he broke his right leg in a 2013 sprint car accident, and he seems emotionally healed after the August death of sprint car racer Kevin Ward Jr., who was struck and killed by a car Stewart was driving.

“I’m not happy about the last two years of my life, by any means, but I’ve never questioned who I am or what I do,” Stewart said. “It’s probably made my desire stronger than ever.”

He and his rivals will be featured heavily this year in marketing campaigns as NASCAR begins a new television package. The season will be split, with Fox airing the first half of the schedule on its flagship channel and Fox Sports 1. The second half will be aired on NBC and NBC Sports Network.

There will also be changes to the cars and on pit road.

The Cup cars this year have smaller spoilers, reduced horsepower and drivers will be able to make their own track bar adjustments from inside the cockpit. NASCAR has also replaced officials with 45 cameras that will police pit road. The cameras will be monitored from a command center, and it will be tough for teams to dispute calls.

With testing banned this offseason, the teams have not gotten a good look at the 2015 rules and won’t until Daytona opens on Friday. Some haven’t been in a car since the Nov. 16 finale.

College basketball: Wake finds nothing but net against Miami