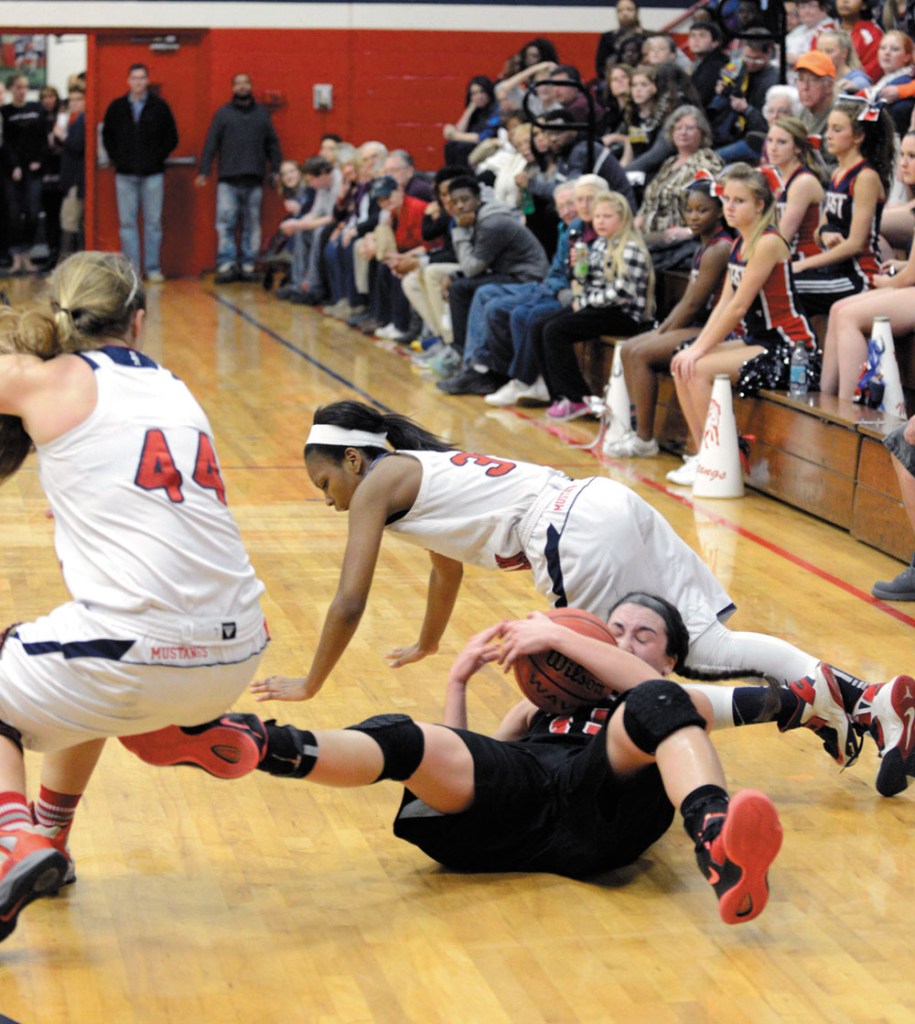 FILE PHOTO BY WAYNE HINSHAW/FOR THE SALISBURY POST South Rowan's Avery Locklear (15) has the ball on the floor Jan. 9 while East Rowan's Kaleigh Troutman (44) and Shenique Pharr (32) fall to the ground as well. The Mustangs defeated the Raiders 58-54 in the first meeting at East Rowan. The two teams meet Friday in a showdown for the South Piedmont Conference championship.

LANDIS — South Rowan’s girls were victims of clutch Shenell Pharr 3-pointers and lost 58-54 at East Rowan on Jan. 9, but there was no panic in the eyes or voice of South Rowan coach Jarrod Smith in the aftermath of a painful loss.

“We’re OK,” Smith said. “If we win out, we still win the SPC championship.”

Smith’s Raiders (16-6, 13-2 SPC) have won their seven conference games since that setback in Granite Quarry, including a tense, double-overtime struggle at third-place Hickory Ridge last Friday.

East Rowan also hasn’t taken its foot off the gas pedal. The Mustangs (20-2, 13-2 SPC) have won nine straight overall and eight straight in the league and their payback victory against Central Cabarrus on Tuesday officially eliminated talented Hickory Ridge team (12-3 SPC) from the conference race.

Both East Rowan and South Rowan are sizzling  entering Friday’s showdown in South Rowan’s gym. One will emerge with an outright conference title and all the things that accompany that trophy — the No. 1 seed for next week’s SPC tournament and a No. 1 seed for the 3A state playoffs.

“It’s our Senior Night and we’ve got 11 seniors playing for a conference championship,” Smith said. “It doesn’t get much more exciting than that.”

South Rowan hasn’t won a conference title — regular season or tournament — since 1999. Before they were runners-up to East Rowan in the SPC last season, the Raiders hadn’t even finished second in their league since 2002.

Smith is in his sixth season. His first four teams had losing records. He’s convinced his current seniors are as good as they are now because of the adversity they experienced as sophomores two seasons ago.

“We only had six wins that season, but now we only have six losses,” Smith said. “Our girls have fought through a lot to have a chance to win a conference championship. They’ve earned their shot at a championship.”

The Mustangs have a lot to play for as well. Last season, they won their first league title since 2004 and now they have a chance at the school’s first back-to-back conference crowns since the 1979-80 and 1980-81 seasons.

“That’s not really something we’ve talked about – we’re just trying to stay focused on our goals for this season,” East Rowan head coach Danielle Porter said. “We just want to keep playing together. We want to keep doing what we’ve been doing.”

Recent history favors the Mustangs. They’ve won eight out of nine against South Rowan over the last four seasons, and Porter is 10-2 against Smith since taking the head job at East Rowan.

East Rowan’s 6-foot-3 UNC Asheville signee Kelli Fisher, who averages 18 points and 12 rebounds, presents problems for everyone. Containing her is a difficult challenge for a small South Rowan team. Cassidy Chipman, a 5-foot-10 senior who shoots from long range but bangs in the post defensively, is the Raiders’ tallest starter.

East Rowan looks different after graduating Karleigh Wike, a 6-foot-4 Richmond signee who was one of the better players in school history, but while the Mustangs got shorter, they have compensated in other areas.

“I really think we’re a better team this season,” Porter said. “A lot of our girls have matured and they are better, smarter players than a year ago. And we’re a much more dangerous transition team now.”

South Rowan brings major firepower to the matchup with senior guard Avery Locklear, a relentless UNC Pembroke signee who is the leading scorer in school history with 1,732 points. Locklear scored 23 in the January loss to the Mustangs.

Locklear has played 93 games for the Raiders and has averaged 18.6 points per game. The school record at South Rowan for career scoring average is 18.5 by Wanda Watkins in the early 1980s.

“South Rowan is hard to beat because they’ve got two prolific scorers, two of the best scorers in the county,” Porter said. “Chipman has a lot of tricks and she’s a tough matchup because she can drive or shoot outside. Locklear just gets after it and stays after it.

“South is tough to zone because in a zone it’s a lot harder to find Chipman and Locklear and box them out, and they’re also their best two rebounders.”

While it’s South Rowan’s Senior Night, it won’t be the last game on their home floor for Locklear, Chipman and longtime teammates such as Sylvetta Bost, Caroline Hubbard, Kayla McClendon and Beth Ann Martin.

“We know we’ll be back for a conference tournament game and hopefully for playoff games, so there’s no pressure in the sense of it being their last game here,” Smith said.

The same goes for East Rowan, which had its Senior Night on Tuesday. This isn’t about pressure, it’s about competing with a rival for a banner and bragging rights.