College basketball: Wake finds nothing but net against Miami 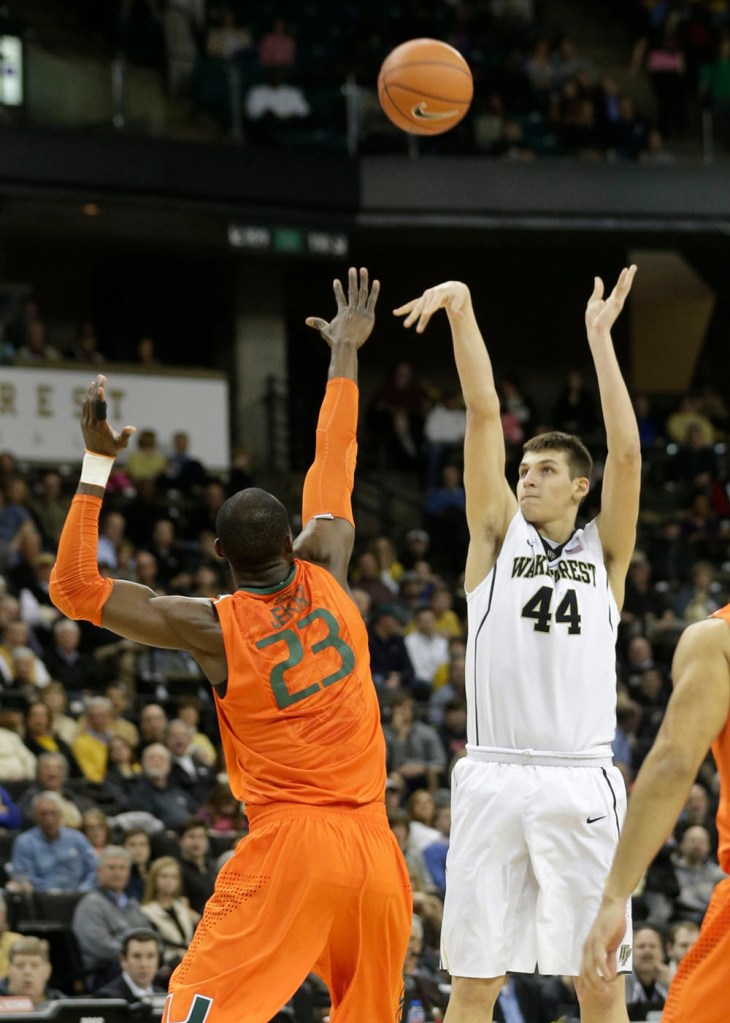 The Associated Press Wake Forest's Konstantinos Mitoglou (44) shoots over Miami's Tonye Jekiri (23) during the first half Wednesday. The Demon Deacons swished 11 3-pointers in the first half, and they held on to win 72-70.

WINSTON-SALEM, N.C. (AP) — Wake Forest couldn’t seem to miss from long range. Miami couldn’t get the one layup it needed to fall.

The Demon Deacons held on to beat the Hurricanes 72-70 on Wednesday night after Miami’s tying layup attempt at the buzzer rimmed out.

“We got very fortunate down the stretch,” Wake Forest coach Danny Manning said. “He missed the shot.”

Dinos Mitoglou scored 16 of his 21 points in the first half, while Darius Leonard added 14 points and Devin Thomas had 13 for the Demon Deacons (12-13, 4-8 Atlantic Coast Conference).

They made a season-high 12 3-pointers and shot 46.4 percent while winning their third in four games.

Sheldon McClellan added 11 points for Miami, which has lost five of eight games since its upset at No. 4 Duke on Jan. 13.

The Hurricanes had a perfect opportunity to send this one into overtime after a runner by Codi Miller-McIntyre rimmed out with about 20 seconds left.

Miami called a timeout with 15.7 seconds left to set up its final play, with Reed inbounding to Rodriguez. The Kansas State transfer dribbled out much of the clock and a switched screen created a mismatch with the 6-foot-9 Thomas guarding him near the key.

Rodriguez broke toward the basket, blew by Thomas and found Miller-McIntyre — who had rotated over from the weak side to draw a charge.

Rodriguez eluded him but his layup spun around the rim and trickled out.

“We got the switch we were looking for,” Miami coach Jim Larranaga said. “He got the shot we liked, and it just spun in and out.”

Asked if he thought the layup was in, Miller-McIntyre said: “I was praying it wasn’t.”

The Hurricanes led 68-64 with 3½ minutes left before Mitoglou hit his sixth 3 of the game and Miller-McIntyre followed with a three-point play. After McClellan tied it at 70 with a putback with just under 2 minutes left, Thomas scored the game’s final points on a layup with 1:30 to go.

Rodriguez — who played only nine scoreless minutes in the first half because of foul trouble — had eight points during the 15-3 run that helped Miami erase an 11-point deficit in the second half.

James Palmer’s knifing layup with about 7½ minutes left gave the Hurricanes their first lead since the opening minutes, 62-61.

Mitoglou had one of the stranger shooting lines of the season. All six of the baskets he made were from 3-point line — but he also missed four shots from point-blank range. “I’d much rather have him shoot a 3 than a layup,” Manning quipped.

Wake Forest set its season high for 3-pointers in the first half. The Demon Deacons made 11 from long range before the break, with Mitoglou hitting five of those. They were just 1 of 5 from behind the arc in the second half.

Miami: The Hurricanes fell to 1-7 all time at Joel Coliseum with their only win coming in 2011.

Wake Forest: Miller-McIntyre reached 1,000 points for his career, and it came at an opportune time — his three-point play with 2:12 left put the Demon Deacons up 70-68.