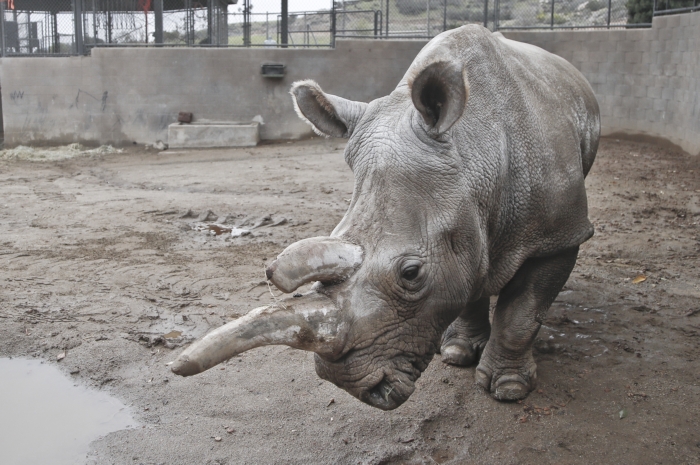 In this Dec. 31, 2014 photo, Nola, a 40-year-old northern white rhino who is only one of five remaining of the species, wanders around her enclosure at the San Diego Zoo Safari Park on a cold winter day in Escondido, Calf. The survival of the northern white rhinoceros and dozens of other species could hinge on the Frozen Zoo, whose collection amassed over nearly 40 years has become the largest gene bank of its kind. (AP Photo/Lenny Ignelzi)

1. FIGHTING CONTINUES IN EASTERN UKRAINE AHEAD OF TALKS

Russia’s Putin and Ukrainian President Poroshenko will meet in Belarus to try to hammer out a peace deal that’s brokered by Germany and France.

The legislative plan will be sent to President Barack Obama who has vowed to veto it.

3. DEATH OF US CAPTIVE CONFIRMED

Her parents and U.S. officials announce that Kayla Jean Mueller, who traveled the world on a quest to help others, died while in the hands of Islamic State militants.

Abdul Rauf, who spent six years at the detention center, was released in 2007 but went on to become the top recruiter for the Islamic State in Afghanistan. He was killed in a drone strike this week.

NBC says the anchor’s misstatements were inexcusable and jeopardized the trust he has built up with viewers.

7. WHERE A WINTER WONDERLAND IS A DREARY GUEST

More snow is on its way to New England which could see up to six inches in Cape Cod before a bigger storm hits Sunday.

8. HOW A ‘FROZEN ZOO’ COULD HELP SAVE SPECIES

The San Diego Zoo has amassed a vast genetic collection that could be the hope of saving endangered animals such as the northern white rhinoceros.

9. WHO’LL BE AMONG FIRST WITNESSES AT ‘AMERICAN SNIPER’ TRIAL

Chris Kyle’s widow, Taya, will take the stand as trial begins in Texas for the ex-Marine accused of killing her husband.

There have been perfume commercials with more depth and story arc, writes the AP’s Lindsey Bahr.

Woman says she and mother assaulted by boyfriend