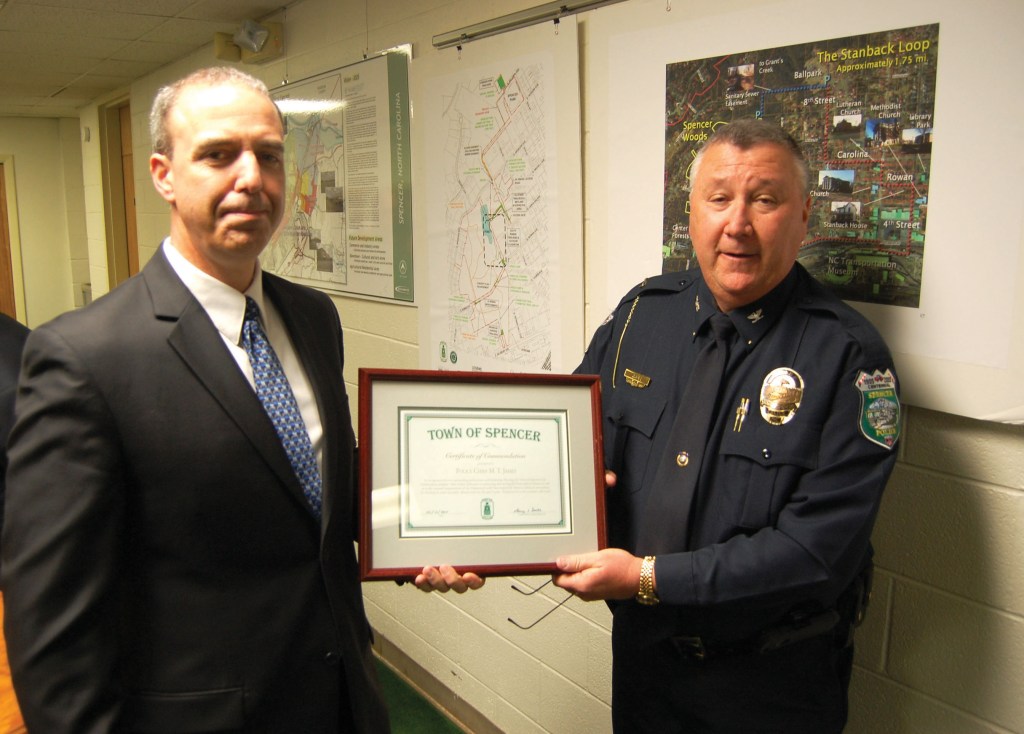 Spencer Police Chief Mike James, right, accepts a plaque of commendation from Town Manager Larry Smith during Tuesday's Board of Aldermen meeting. Smith praised James for his efforts to reduce crime in the town.

The main reason for the honor was the recent release of the town’s 2014 crime statistics from the State Bureau of Investigation.

James started as police chief in 2011.

Smith surprised James with the praise and presented him with a plaque.

James passed the praise onto his officers for the work they do everyday.

“I don’t deserve the credit,” he said, “It’s these guys right here,” referring to police officers at the meeting.

James later thanked the town’s citizens for being active and keeping the police informed about what they see happening in the town.

During the meeting, the board approved the $4,750 contract for the town’s auditor, Eddie Carrick, CPA, for the current fiscal year. Another accountant, Brent Parks, will get $3,250 for work he does relating to the town’s annual audit. Both fees are the same amount as last year.

In other business Tuesday, the board:

• adopted a resolution of support for restoring the state’s Historic Preservation Tax Credits, which expired at the end of 2014. Salisbury Mayor Paul Woodson asked the board to adopt the resolution. The tax credits go toward the redevelopment and reuse of historic properties. Gov. McCrory and former Salisbury mayor Susan Kluttz were in Salisbury Monday promoting the tax credits, which they’re urging the Legislature to restore.
• issued a notice of lien, worth $9,506, for the property at 301 N. Salisbury Avenue for work the town did to abate clogged storm drains that weren’t functioning properly. The property is owned by Agapion Properties II LLC of Greesnboro and is where the town’s Food Lion is located.
• adopted a resolution to sell a piece of custom body armor from the Police Department to the Rowan County Sheriff’s Office for $140. The county Board of Commissioners will have to approve the purchase before the sale is finalized.

• adopted a resolution to accept the updated hazard mitigation plan for the county.

The plan covers a wide range of responses to a number of potential natural or man-made disasters. The county must have the plan in place to be eligible for federal and state aid. The plan was first developed in 2005 and is updated every five years. The current plan covers Rowan and Iredell counties.

Frank Thomason, the county’s director of emergency services, told the board the biggest threats to the county are winter storms and summer tornadoes.