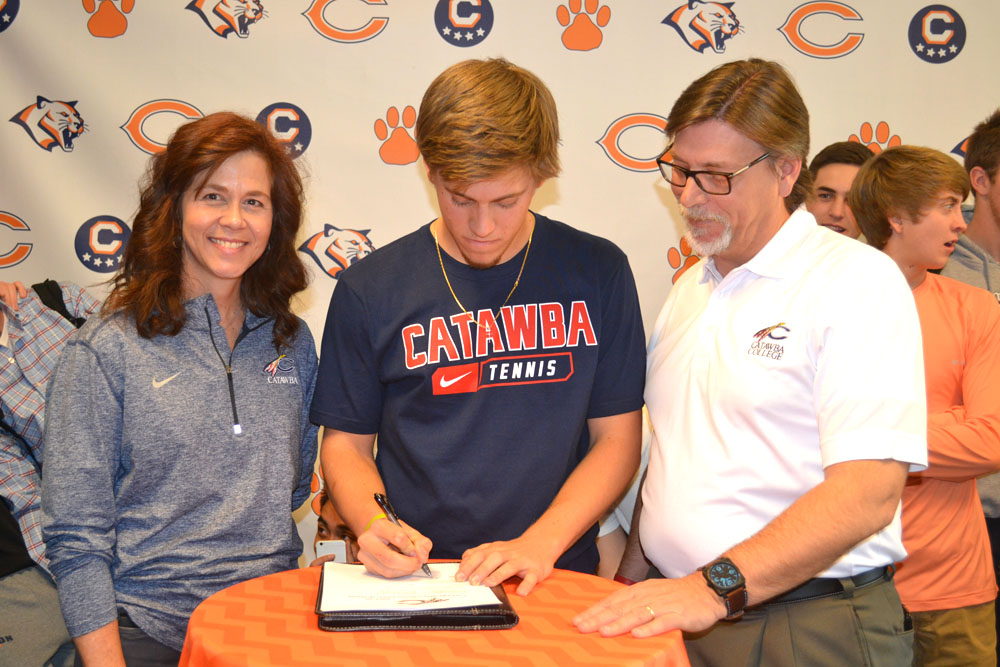 Submitted Photo Marshall Wood (center) signs a National Letter of Intent to play tennis for the Catawba Indians. His mother Jane and father Skip look on during the ceremony.

“I’ve got a lot of therapists to thank and I’ve got my parents (Skip and Jane) to thank for supporting me and driving me to therapy and to tournaments,” Wood said.  “I missed my whole sophomore season, so it’s a great feeling to have an opportunity to sign with a college program.”

Surrounded by coach Josh Trexler and dozens of friends, teammates and family, Wood signed a National Letter of Intent with Catawba on Wednesday in the office of Carson AD Mark Woody.

“When he was hurt, he had thought about not continuing to play, but he not only was very successful last year he had a lot of fun playing,” Trexler said. “He was a big help to me and to all his teammates. He was huge in us finishing third in the South Piedmont Conference and qualifying for the dual-team playoffs.”

Trexler said Wood’s greatest attribute as a player is competitiveness. He was 7-1 in conference matches in 2014, with the loss coming to Northwest Cabarrus standout Kyle Kennedy, a three-time conference player of the year, on a day Wood was battling heat sickness.

“I’ll never forget making it back from the back injury and representing Carson for the first time,” Wood said. “That day will always mean a lot to me.”

In the 2014 postseason, Wood competed in doubles in the Midwest Regional, along with partner Casey Lucas. Wood may have had a chance for a longer run  in singles, but he has no second thoughts.

“I felt like I could compete with some of the guys who made it to states in singles, but Casey was a senior, he was a great friend and I really wanted to play doubles with him,” Wood said. “We won a match in the regional.  I’ve got no regrets at all.”

When it’s time for regionals this season, Wood will likely compete in singles. It will be interesting to see how far he can go.

“Marshall has really developed as a player,” Childress said. “He’s become quicker and stronger, and that will help him at Catawba. We’re very happy to have him, as he had more than a few schools recruiting him. He’ll fit in well with our players on the court and he’ll do very well as a student.”

Wood is 6-foot-3 and sturdily built and looks like a quarterback. Besides Catawba, he took a recruiting visit to West Chester, a Division II school in Pennsylvania. He also considered Belmont Abbey.

“I chose Catawba because I wanted to stay local,” Wood said. “It’s important to me to stay part of this community.”

Wood is an excellent student and plans to major in psychology.

Five of the Indians’ top six current players are from overseas — including two from England, two from New Zealand and one from Spain. The lone American in the top six is a senior, and Catawba’s only tennis signee this year other than Wood hails from Zimbabwe.