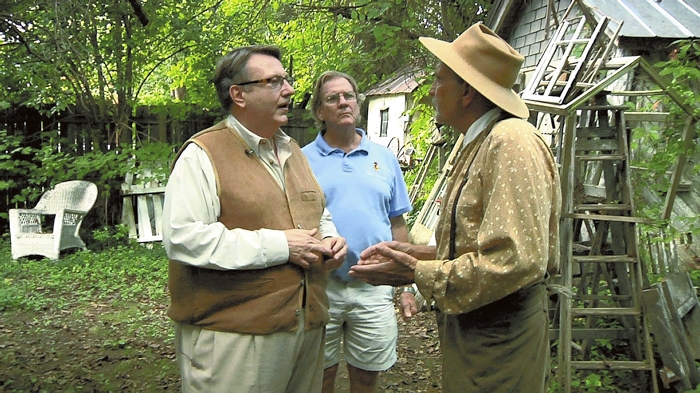 SALISBURY — Carl White says he’s in “the happy-story business,” and that vocation ended up taking him to Salisbury for an episode of his syndicated television show, “Life in the Carolinas.”

“It just works well, and a lot of people want to be on TV,” added White,  producer-host of the show, now in its sixth season.

White’s trip to Salisbury pays visits with Clyde, a local artist and collector, and Tom Isenhour, a bluegrass musician and collector.

The episode including Clyde and Isenhour will air at 11 a.m. Sunday on WJZY Fox 46, Charlotte (Channel 8 on Time Warner Cable and Channel 15 on Fibrant).

White said in Sunday’s episode, “The Collectors,” he will be driving a 1946 Chevrolet and taking along Ken Welborn, a collector friend from Wilkes County. They’ll head off for Pilot Mountain, where they meet with Cookie and Frank at the Pilot Mountain Antique Mall, then it’s on to Salisbury.

White, who owns a farm in Wilkes County, did a previous segment on Welborn and his collecting, It received such a good response, White said, he figured he should incorporate Welborn, publisher of  The Record in North Wilkesboro, into another episode.

“It’s the first story I’ve done where I’ve taken someone other than me on my journey,” White said.

In Salisbury, they will first check in on Clyde and his shop on East Bank Street, which is the only surviving building from the Confederate Prison during the Civil War. Welborn has met Clyde previously, which will help serve as an introduction for White.

“I think it was when they were doing a research piece on Otto Wood,” White said.

Otto Wood was the notorious 1920s-era bandit from Wilkes County who was killed in a shootout with police on East Innes Street in Salisbury.

The men’s visit with Clyde leads to a stop at Isenhour’s home. White said he has known Isenhour for some time and especially was aware of the mandolin player’s old cars and collections of music and vintage television memorabilia.

“It’s his little museum,” White said. “I was just fascinated.”

“The thing that captivated me was his vintage TV show memorabilia,” White added.

Many of the older television series had whole product lines connected with the shows, and Isenhour “has, in some cases, entire collections of everything a show would have made,” White said.

Part of the Salisbury episode’s storyline is White’s traveling around in search of an unusual item that Isenhour won’t have and with which he can surprise the collector.

White says he does 24 to 26 new shows a year,  “Carl White’s Life in the Carolinas” has been Emmy-nominated and has won several awards during its time on the air.

White said he was speaking about his show at a luncheon last year when someone in the audience asked if he ever thought he would run out of good stories.

Someone else in the crowd shouted out that the questioner must not be from these parts. Otherwise, he would know White will never run out of stories. White said he had to agree.

“There’s simply no way,” he added.

White met Gold Hill’s Vivian Hopkins during a Founders’ Day weekend, and Hopkins has served as a public relations and production assistant and has helped White with the “Bluegrass People” documentary he has been working on for two years.

“We’ve done a lot together,” Hopkins said. “He’s an interesting character and does a wonderful job.”

Hopkins said White seems to find stories and people in the backyards of the Carolinas that otherwise”you just don’t know about.”

White, 50, said his syndicated show now has access to 6 million viewers, and he characterizes every episode as “evergreen,” meaning something he did six years ago still holds up if it’s shown again today.

He often enjoys introducing people to a particular person or location, then makes a point of taking them back for another visit.

Sunday’s episode is the show’s first visit to Salisbury.

Contact Mark Wineka at 704-797-4263. For more information on “Carl White’s Life in the Carolinas,” go to www.lifeinthecarolinas.com.