Leonard Pitts: This betrayal is worse 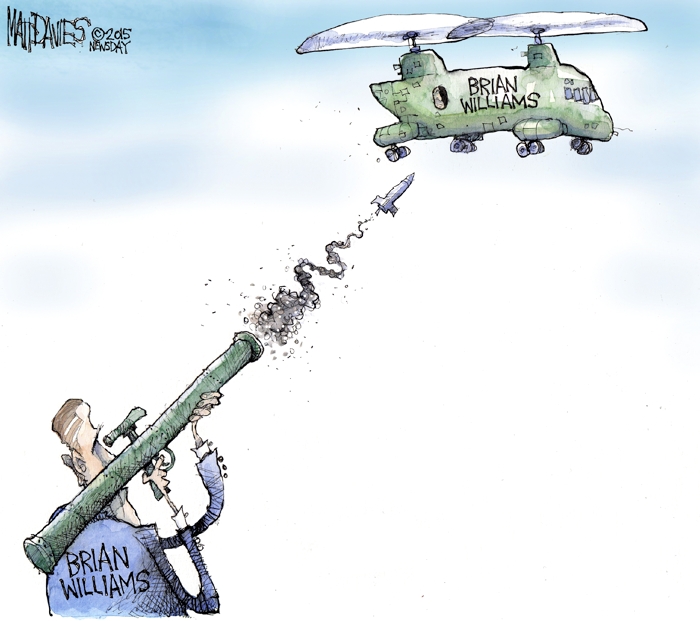 There’s this speech I give my students. Distilled, it goes like this.

“Your primary asset as a journalist is not your dogged curiosity, your talent for research or your ability to make prose sing on deadline. No, your one indispensable asset is your credibility. If you are not believable, nothing else matters.”

Which brings us, inevitably, to Brian Williams. The NBC Nightly News anchor saw his career crumple like used Kleenex last week after he repeated one time too many a story he has been telling for years: how a U.S. military helicopter on which he was a passenger was shot down over Iraq in 2003.

But the man who was flight engineer on that copter said on Facebook that Williams was never on it. Instead, he was on the one trailing it. Williams apologized for conflating the two, blaming the “fog” of memory.

The incident was similar to Hillary Clinton’s false 2008 claim that she came under sniper fire as first lady during a 1996 visit to Bosnia. As it turns out, an American dignitary was shot at in Bosnia — just not Clinton. Rather, it was then-Sen. Olympia Snowe, six months before.

Then, as now, one is tempted to ascribe the lapse to false memory, that phenomenon where you recall with clarity things that never happened. Then, as now, one is hampered by the sheer drama of the events in question. A person may honestly misremember eating at a certain restaurant or seeing a given movie. But you’d think you’d be clear on whether or not somebody almost killed you.

So now, people are poring over old newscasts to determine whether this is an isolated incident. A statement by Williams of seeing bodies outside his hotel during Hurricane Katrina was initially mocked, but has been found on closer inspection to be more credible than first believed.

Fans of Fox “News,” at least to judge from my email queue, are having a ball with all this. I wrote a column a few weeks back blasting Fox for its habitual, ideology-driven inaccuracy. Attacking Fox is not for the faint of heart. Its viewers (like Rush Limbaugh’s listeners) tend to take it personally, responding with such a nasty, visceral outrage that a body might think you’d blasphemed their deity rather than criticized their news outlet.

I savaged CNN in this space last year and while some folks took issue, no one called me a “bleephole” or invited me to “bleep” myself. With Fox fans, that’s the salutation.

So this latest news brings a flood of email crowing over Williams’ troubles and demanding I give him equal treatment.

As I wrote in the aforementioned column, serious people do not take Fox seriously.

Indeed, consider the level of angst, the sense of expectations betrayed, that has attended Williams’ failure and ask yourself: Would there be a similar outpouring if someone at Fox had told this whopper?

Fox is what Fox is, but its distortions and mendacities are generally only mistaken for gospel by a stratum of the electorate already predisposed to its bizarre worldview. The rest of us like to think we can expect a higher standard from the old guard of the news media, meaning the likes of CBS, NBC and The New York Times. And usually we can.

But every time that belief is betrayed — meaning not garden variety errors of fact, but catastrophic failures of journalistic integrity — the damage is exponentially greater precisely because the level of trust is exponentially higher. Such failures feed the disaffection and cynicism of a politically polarized nation where the universally accepted fact is an endangered species.

It’s a state of affairs that makes it hard to run a country. Or to be one.

So people asking that I give Brian Williams equal treatment are missing the point. If, indeed, he lied, then his sins are not equal to Fox’s.

Leonard Pitts is a columnist for The Miami Herald. Contact him at lpitts@miamiherald.com.

Nowhere to go but up on school performance grades