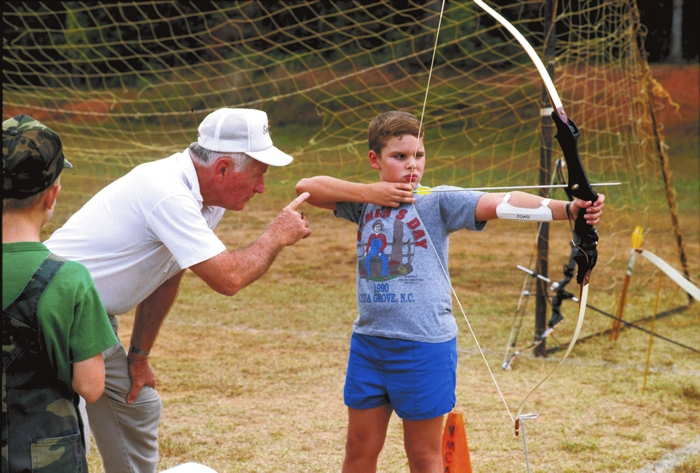 When Jack Thomas wanted something done, it got done —hitting the bulls-eye or carving a beautiful piece of wood or building a Y.

Thomas, who stared programs that were eventually housed in the South Y, died Friday. He was 84.

David Roberts was a member of the South Y board that hired Thomas from the Raleigh Y in 1979.

“The South Y had virtually nothing at that time,” Roberts remembered Tuesday morning. “Harold Simpson, who was mayor of China Grove then, allowed Jack to work out of his office.”

Thomas borrowed facilities from churches, schools and the community to run his programs, Roberts said. “Jack was basically a one-man show.”

When the South Y opened in November 1994, Roberts said, Thomas stepped aside and allowed Jamie Morgan to take over as executive director. Morgan now holds the position of CEO of the Y in Rowan County.

“There would not be a South Rowan Y if it hadn’t been for Jack,” Roberts said.

Thomas was a man of many talents. He took honors in state, regional and national archery competitions, and later turned his laser focus into wood crafting and making and learning to play — Native American flutes.

“To me, he was such an unusual guy,” Roberts said. “He could stick with it like a hound dog on a rabbit’s trails until the details of a project were worked out.”

Roberts continues to serve on the South Y board, and said people like Thomas helped the Y in Rowan County become what it is today.

“When you look at Rowan County’s Y assets, we really have some tremendous facilities,” Roberts said. That’s due in no small part to Thomas, he said, and because of the South Y’s early success, other Y’s realized that they could be successful as well.

“He was a real gift to the community,” Roberts said.

“Jack was a very determined person, a very focused person,” Miller said Tuesday morning. “Whenever he set his mind to do something, it got done.”

Miller met Thomas through Roberts, and, as a teacher at South Rowan High School, he and his students collaborated with Thomas on a number of Y projects, from landscaping to assembling bleachers.

“We had a real close working relationship with Jack,” Miller said. “I never met a person who was more dedicated to any purpose than Jack.”

Miller pointed out that Thomas excelled at everything. He once attempted to smell a rose Thomas carved and a hummingbird Thomas created looked as if it were about to take flight.

“He was just an amazing person and talent,” Miller said. “It would have been very tough to establish the Y without the groundwork he laid.”

Miller and Roberts were about to leave to visit Thomas on Friday morning before they learned of his death a few hours earlier. Miller would’ve probably liked to have received a strong handshake from Thomas one more time.

Man on bicycle dies after being struck by train