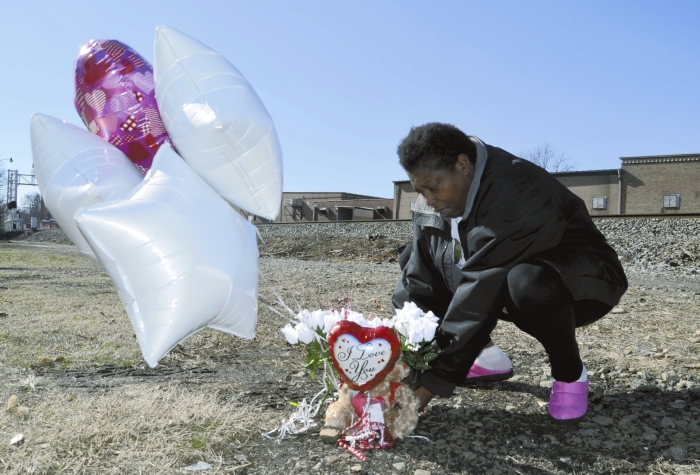 Deborah Miller adjusts some flowers, a stuffed animal and balloons that were left for her brother, Jeffrey Wayne Hooker, who was struck and killed by an Amtrak train Tuesday night at 11th Street and Lexington Avenue. Shavonne Walker/Salisbury Post

Jeffrey Wayne Hooker was always on his bicycle and would even refuse a ride home because he would rather ride the bike.

His family believes Hooker was trying to save the bike when it became stuck on railroad tracks Tuesday night before he was struck by an Amtrak train and killed.

Hooker, 50, was knocked about 67 feet from the tracks near a railroad crossing at the 300 block of 11th Street and Lexington Avenue.

Salisbury Police, Rowan EMS and Salisbury Fire responded to the scene around 7:30 p.m. Emergency personnel performed CPR, but were not able to resuscitate Hooker. He died shortly after the accident.

Police said Hooker went around a stationary Norfolk Southern train, but was struck by an Amtrak train traveling on another track. The railroad crossing gate was lowered.

The accident occurred at 7:30 p.m., but it was sometime after 9 p.m. when emergency personnel cleared the scene and allowed the trains to continue.

Witness Willie Mitchell told a Post reporter he saw Hooker and believed the man tried to “beat the train.”

Family and friends left balloons, flowers and a stuffed animal near Richard Street, an unpaved road that runs parallel to the railroad tracks where Hooker died.

Deborah Miller, Hooker’s younger sister, said she’s really going to miss her brother because he was the one who got the family together for reunions and gatherings.

She received several phone calls the night her brother was killed from people who had heard, but Miller said she refused to believe it until she received confirmation. She drove to the scene at the same time as her daughter, Tracy Hooker.

Miller said she asked an officer how he knew it was her brother, and he told her it was because he and Hooker attended church together.

“He was a good person,” Miller said.

She said if anyone needed anything — their grass mowed or food — he would help them.

Jeffrey called Miller if he had a problem, and she would calm him down, she said.

Miller said she’d like to thank the woman who performed CPR, who lived not far from the scene in a house on Long Street.

Fellow church member Justin Rogers said he picked Hooker and his wife, Lana “Nora” Hooker up for church every Sunday. He recalled one of the last conversations he had with Jeffrey.

“He said, ‘Christ is trying to do something in this community, but people don’t get it,’ ” Rogers said.

The Hookers attended the River Church of God, off Morlan Park Road, for four years.

“He was a hard worker. He was a good guy,” Rogers said.

Jeffrey was an usher, greeter and parking lot attendant and helped prepare the church’s Thanksgiving meals for the needy.

Nora Hooker met her husband, Jeffrey, about 30 years ago. The two met at Clancy Hills Apartment complex. She lived in the back, and he lived in the front, she recalled with a smile.

“He was good, kind and sweet,” she said of her husband.

The couple began dating in 2004, but just celebrated their fifth wedding anniversary Dec. 7, she said.

She says she’ll miss her husband. Even the couple’s dog, Chop, misses Jeffrey.

“The dog is used to seeing Jeffrey every day,” Nora said.

Jeffrey would feed Chop before he left for work and after work.

Nora called her husband a jack-of-all-trades, an outdoorsman, an animal lover and a handyman. He loved to cook, and it didn’t matter if it rained or snowed, he’d grill outdoors.

“That little bit of snow we got a couple of years ago … he fired the grill up in the snow,” Nora said.

She recalled a time when her husband fired up his grill for a few friends who came over, and as the hours wore on, more and more people began stopping by for food.

He would turn the television on for a good science fiction program, she said.

Nora called her husband a family man. The couple together have three children and five grandchildren.

What she’ll miss about her husband is “everything,” Nora said.

His favorite time of the year to celebrate was Valentine’s Day. He would go over the top for his wife.

Nora became emotional as she told a Post reporter she didn’t want to know what her husband had planned for Valentine’s Day. She recalled a memorable surprise Valentine’s Day overnight trip to Chapel Hill a few years ago.

There were few people in Salisbury who didn’t know Hooker, Nora said.

He previously worked for Bill’s Exterminating Co., which is now Peeler Environmental and Pest Control. He had also worked at Promo Lawn Service and as a house attendant for Betty Peeler, Nora said.

“I love him. I’m going to miss him. He will forever be in my memories,” Nora said. “I won’t meet another man like him.”

Funeral arrangements are incomplete, but Nora hopes to have the funeral early next week. Hairston Funeral Home is assisting the family.