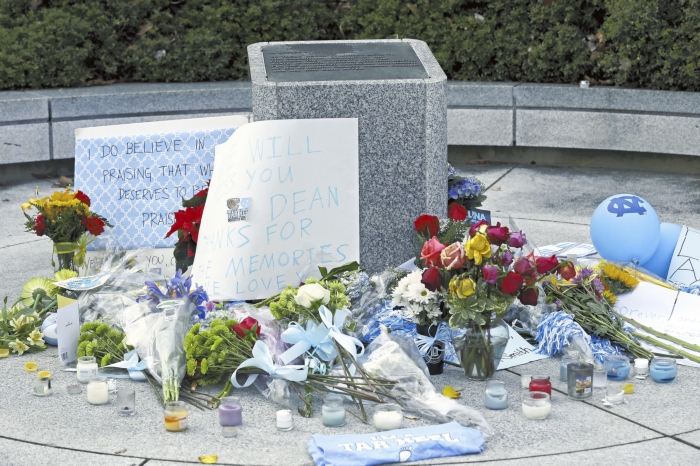 The school says the service will take place in the campus arena bearing the name of the Hall of Fame coach, who died Saturday at the age of 83.

The family has scheduled a private church service for Thursday for family, close friends, former players, coaches and team managers — who are asked to RSVP if they want to attend.

In a statement released by the school Monday, Smith’s family said it is “comforted by the countless gestures and words” from well-wishers.

The family also asked people to donate to the Chapel Hill-based Inter-Faith Council for Social Service, the Dean E. Smith Opening Doors Fund or a charity of their choice in lieu of flowers.

Quotes and reaction to the death of Smith continued to roll in on Monday:

•“We lost a basketball pioneer for sure. He’s touched so many guy’s lives. He touched one of the greatest, if not the greatest to ever touch the floor — Michael Jordan. The list goes on and on. But more than that, guys who didn’t even play for UNC or never even walked that campus, what he meant to our game means a lot. Obviously, the game wouldn’t be what it is today without his presence, his influence and everything he did for our sport. He’s gone but he will definitely never be forgotten. His name will live on his basketball history for sure.” — LeBron James.

•“Dean was a great friend and a great coach. I will miss him dearly. He was devoted to me and I to him and I will forever be grateful for our friendship.” — Bill Guthridge, a 30-year assistant to Smith and his successor in 1997.

•“I was very blessed and fortunate to have had him in my life. I’ll be able to sit down and tell my grandchildren I played for Dean Smith, which is really cool.” — former UNC point guard Phil Ford, who played for Smith from 1974-78.

•“He was all about relationships. He always used to talk about that he couldn’t coach us unless he knew us. He would take time to spend time with us and get to know us. That was the great thing.” — UNC assistant coach Hubert Davis, who played for Smith from 1988-92.

•“Like the rest of the college basketball world, I was deeply saddened to learn of the passing of Dean Smith, who was not only one of one of the greatest coaches of all-time, but a true innovator of the game. Dean was a father figure to many, many young coaches and taught a lot of us what it means to build a program, not just a team. … Dean’s influence, however, went far beyond basketball coaching. His work with desegregation and women’s rights showed what an equally incredible person he was. What he means to the people of North Carolina is immeasurable.” — former Connecticut coach Jim Calhoun.

•“He was more like a father to me than a coach. In fact, it feels like I’m losing a father. I wouldn’t be the man I am today if it wasn’t for Coach Smith. My heart goes out to his family.” — former UNC player Antawn Jamison, who played on Smith’s final two teams.

•“Sometimes the word legend is used with too little thought. In this instance, it almost seems inadequate. He was basketball royalty, and we have lost one of the greats in Dean Smith.” — John Swofford, ACC commissioner and former UNC athletic director.

•“Sending my prayers and deepest sympathies to Dean Smith’s family. May we celebrate the gift we all were given with his life.” — former Tennessee women’s basketball coach Pat Summitt on Twitter.

“Dean Smith was a gentleman and one of the greatest coaches and innovators in the game. He was ahead of his time and he will be missed greatly!” — former St. John’s coach Lou Carnesecca.

“Dean Smith had an influence on all of us to be better in our coaching careers. He displayed great integrity, honesty and was someone we looked up to. He will truly be missed in the basketball community. Our thoughts and prayers are with his family.” — former Purdue coach Gene Keady.

“He was just a great bench coach. It was a constant effort to prepare for hours for his team because he adjusted so well. You really had to go to great depths to prepare because his system was so sound and he had the players to execute it.” — former Kentucky coach Joe B. Hall.