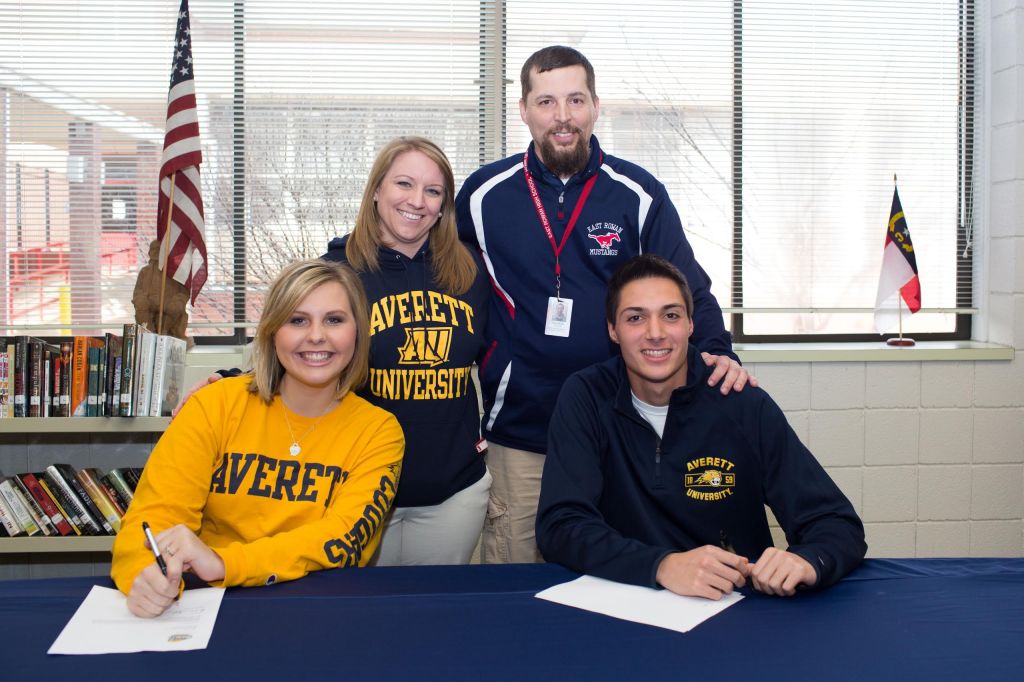 East Rowan isn’t a soccer power when it comes to boys (6-15 last fall) or girls (3-15-1 last spring), but the Mustangs do compete. A reason they have a chance is that both teams have an exceptional goalkeeper. Hester once recorded a 27-save game against Hickory Ridge, while girls keeper Kennedy Lambert  turned away 29 shots on goal against Cox Mill.

“We play in a good soccer conference and we obviously haven’t been one of the top teams in our league,” Moffitt said. “So for both of our goalkeepers to be voted keeper of the year, that’s amazing. That says a lot about what kind of players they are.”

If it sounds like Lambert and Hester have a lot in common, here’s where it really gets interesting. Both will continue their playing careers and educations at Averett, a Division III school in Danville, Va.

“Kennedy had decided on Averett, so when I started contacting programs in the recruiting process, they were one of the schools I emailed,” Hester explained.  “I had some Division II offers, but I really liked the young coaches at Averett. It was the best fit athletically and academically.”

While it can’t offer athletic scholarships, Averett has  a serious commitment to sports. Ground was broken last April on a $6 million stadium for football and soccer.

The 6-foot-2 Hester was a good basketball player growing up, and his height and wingspan serve him well in soccer.

“Besides athletic ability, he’s very self-motivated and he has a lot of leadership skills,” Moffitt said. “The game that sticks out from last season was against South Rowan. We won, 2-1, in overtime. Christian made several phenomenal saves.”

Moffitt said Hester was 4-for-5 on stopping PKs last season.

Hester, who plays for a Lake Norman club team, still has his best soccer in front of him.

“I’ve played soccer since I was young, but it’s just in the last few years that I’ve really started understanding the whole game,” Hester said.

Lambert got her start as a goalkeeper when her Erwin Middle School had a need for one. She was able to play soccer and softball at Erwin because the sports are played during different seasons in middle school, but they’re both spring sports in high school.

“I miss softball, but what I liked best about softball was diving for balls in the outfield.” Lambert said. “I still get to dive for balls as a goalkeeper.”

Lambert has made steady progress every year.

“She’s a big reason why we stay in games,” East Rowan girls coach Megan Smith said. “She had some obstacles early in her career with confidence, but then she really blossomed. Now she’s just a huge presence in goal for us. Out league has good scorers, and she’s stopped breakaways by those big scorers.”

Smith said Lambert has stopped as many as eight breakaways in a game.

Lambert wasn’t sure about her college future, but at a camp at Roanoke College, she met Averett coach Carly Pearce, who has coached there since 2008 and has molded championship teams.

“We talked about me visiting, and when  I went to look at Averett, I loved it,” Lambert said.

Hester plans to study computer science or athletic training. Lambert is a math whiz. Her goal is to become an actuary.

The immediate goal for Lambert is to help her team put up positive numbers on soccer scoreboards.

“I know we haven’t won that many, but we have a great time,” Lambert said. “I love my teammates.”