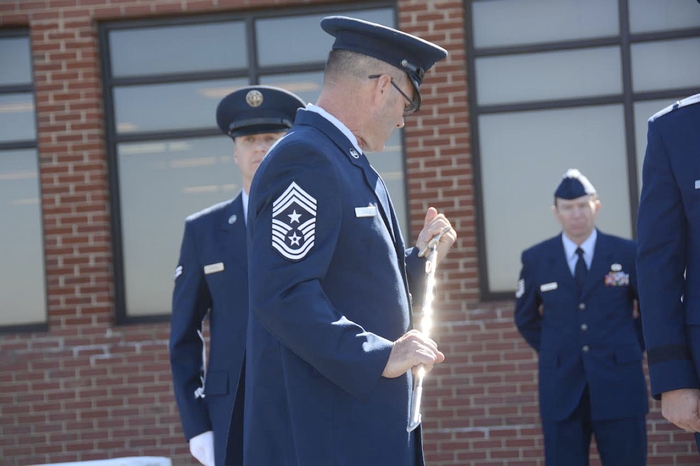 CHARLOTTE – With a military band playing and flags blowing in the breeze, a Rowan County man officially took over Sunday as the top non-commissioned officer in the N.C. Air National Guard.

With troops, dignitaries, family and friends looking on, Brig. Gen. Roger E. Williams Jr. formally oversaw the change of authority in a ceremony that honored both Stanley and his predecessor, Chief Master Sgt. Bruce Pickett.

Pickett, who served as command chief for three years, ceremonially handed over a sword to Brig. Gen Williams, who then turned and passed it to Stanley.

Nearby on the tarmac, hundreds of Air National Guard troops stood in formation as the formal order naming Stanley to his post was read.

Once the ceremony ended, many of those troops lined up to congratulate Stanley on his new post – including some who said they’d known the new command chief for years.

In his new role, Stanley will advise the state adjutant general on matters pertaining to health, welfare, morale and utilization of more than 1,200 enlisted airmen in the N.C. Air National Guard.

Outside the formal pomp and dignity of the ceremony, Chief Master Sgt. Stanley spoke with humility of the responsibility that awaits him.

“It’s not about me,” Stanley said. “It’s an opportunity to serve the men and women (of the Air National Guard) on a different level.”

Stanley’s new role is the culmination of a total of almost 33 years of military service.

As advisor to Brig. Gen. Williams, Stanley said he’ll have an opportunity to speak to issues that affect enlisted personnel throughout the state.

After serving several years in the N.C. Army National Guard, Stanley joined the 145th Airlift Wing as a fuels specialist.

Troops who know Stanley said they’re glad to see him rise to his new position as command chief.

Staff Sgt. Scott Earnhardt, of Salisbury, was one of many Air Guard troops present at the ceremony.

“Everybody loves him,” Earnhardt said, “from Mount Ulla all around Rowan County. It’s great that he made it up to the top.”

“He’s a very smart, upbeat NCO (non-commissioned officer),” said Master Sgt. Doug Rook. “He has care and consideration for the people around him, and he’s very experienced.”

Stanley’s wife, Leanne, and their three children sat in the audience alongside dignitaries including N.C. Rep. Bill Brawley, of the 103rd House District.

In his remarks from the podium, Stanley thanked his wife and children for their support throughout his career, which has included five deployments and numerous training exercises and other duties.

Stanley was one of many who spoke of the Air National Guard as a family, with troops and officers looking out for one another.

Also on hand were former colleagues from Stanley’s civilian career as a firefighter.

Battalion Chief Shane Nantz, of the Charlotte Fire Department, said Stanley has been a strong advocate of both the Air National Guard and the city’s fire department.

“He’ll be able to speak to the issues for the enlisted troops here (in Charlotte) and in Stanly County,” where the Air National Guard also operates, Collins said.

For her part, Leanne said she and their children — Mary Beth, Meredith and Michael — are thrilled by his new role.

“I’m really excited, and proud of him,” Leanne Stanley said. “He will do a wonderful job with everything he’s going to do in this position.”