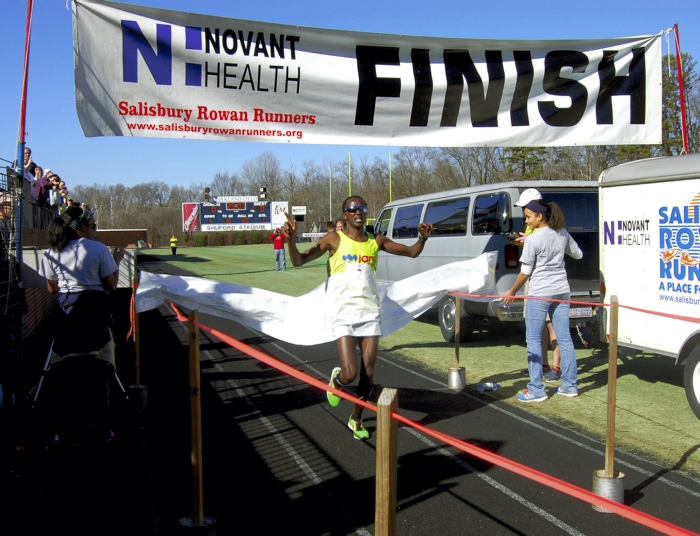 Eliud Ngetich broke the Winter Flight record as he crossed the finished line with a final time of 23:07. Jeanie Groh/Salisbury Post

The sun shone brightly Sunday afternoon, warming the faces — and feet — of those participating in the 32nd annual Winter Flight 8K road race.

Music filled the air at the starting line on Catawba College’s campus as 326 runners prepared to take on the five mile course, including 21 year-old Eliud Ngetich from Eldoret, Kenya.

Ngetich’s participation was highly touted by the Salisbury-Rowan Runners club as being a potential threat to break the course record of 23:35 which was set in 1988 by Dutch Olympian Hans Koeleman.

Most of the runners arrived by 1 p.m., and checked in at Goodman Gym.

A fun run kicked off the day’s events at 1:30 p.m., where children could participate in a two-lap race around the track at Catawba’s Shuford Stadium.

The main event started at 2 p.m., on Yost Street, in front of the stadium’s main ticket booth.

After a brief talk from organizer David Freeze and the National Anthem, runners began making their way straight to Statesville Boulevard, where they ran west until taking a right onto North Milford Drive. The participants continued until the street intersects with Jake Alexander Boulevard, then turned right and followed it to West Innes Street. The course turns right, onto West Innes and then right again onto North Park Avenue, to enter back onto Catawba’s campus.  The runners then turned left, back onto Yost Street, before turning right into the stadium.

The final leg of the race is on the stadium track, looping around to the home grandstand and the Salisbury-Rowan Runners’ finish line.

Ngetich proved to be the highlight of the event when he finished in a time of 23:07, setting the course record and beating the former mark by 28 seconds.

“I am so happy,” he said after the race.

Ngetich is using races like Winter Flight as part of his training.

His speed paid off as he averaged four minutes and 37 seconds per mile.

Ngetich classifies himself as a marathon runner, and participates in three marathons each year.  Currently Ngetich trains three times per day, every other day and twice daily in the days between.

“I was trying to finish in 30 minutes and I got 30:02,” Cornelius after he crossed the finish line.

Wind appeared to be the issue for many runners, including Kelly Lowman from Faith.  Lowman was the first Rowan County female to complete the course.

Lowman, a veteran of many races, including the 2013 Boston Marathon, finished as the third overall female but won the Master’s division for runners over 40 years old.

Both Cornelius and Lowman said the hardest obstacle of the race was fighting the wind.

“It was unpleasant,” said Cornelius.

“I personally like the warm weather,” Lowman said, but added that the wind made it harder.