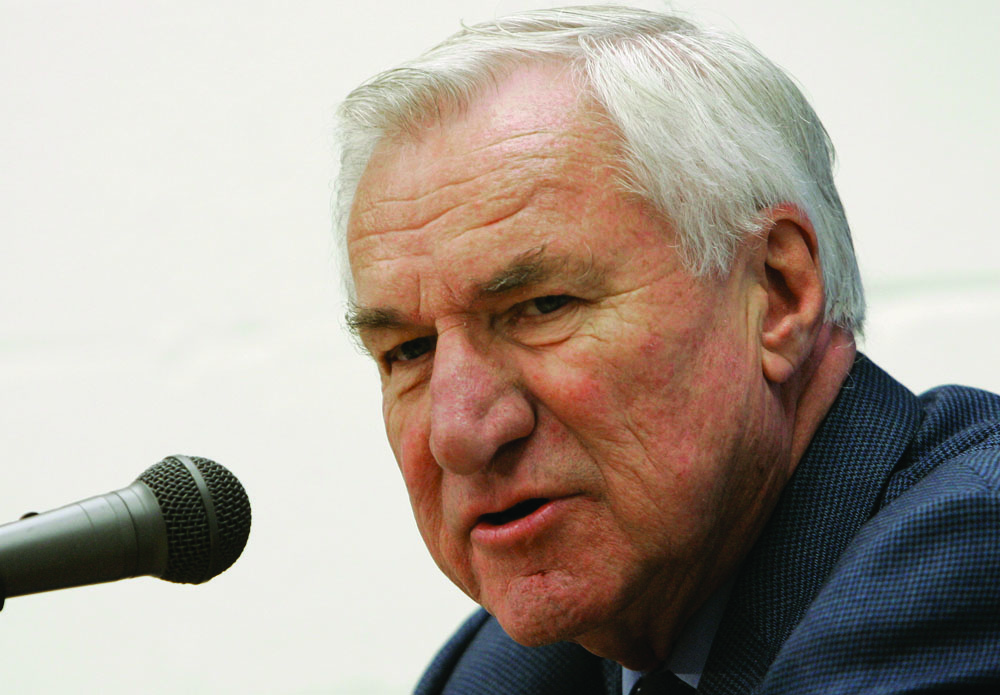 During Catawba’s basketball game against Tusculum Saturday at Goodman Gym, Tusculum’s Chase Mounce caught a nice bounce pass from teammate Cory Fagan, laid the ball in the hoop and pointed at Fagan as they sprinted down the floor.

That point-at-the-passer practice was introduced by Dean Smith, and that moment on Saturday was proof Smith’s way of doing things remains part of basketball nearly 18 years after his retirement as coach of the North Carolina Tar Heels.

Even at a Division II school in rural Tennessee, guys understand the person who made the unselfish pass should be celebrated more than the one who made the layup.

Smith died Saturday evening in Chapel Hill at 83, but the things he left behind — pointing at the passer, the half-court trap, the tired sign given by winded players, the free-throw line huddle, the concept of the offense-directing point guard, the passing game, the point zone, and of course, the famous four-corners stall — are part of his legacy.

If he didn’t invent all those things, he was, at the very least, the man who made them part of basketball as we know it.

“Icon is the word that keeps coming to my mind,” Salisbury boys basketball coach Jason Causby said. “Dean Smith was an icon.”

Causby was at church Sunday when he got the news.

“I knew he was in declining health, and you know life takes its twists and turns,” Causby said. “But it was still a shock. He was just a rock-solid guy. You just assume a guy like that will always be there.”

One of Causby’s most cherished childhood memories is attending a UNC game with his grandfather shortly after the Dean E. Smith Center — soon to be known as the Dean Dome — opened. That was the 1986-87 season.

“That was my team — freshman J.R. Reid, Kenny Smith at point guard, Jeff Lebo, Scott Williams and Joe Wolf,” Causby said. “J.R was on the cover of Sports Illustrated that year dunking on (Wake Forest’s) Ralph Kitley, and that’s still my favorite team.”

Causby attended the basketball camp run by Smith and longtime assistant Bill Guthridge in the early 1990s. Causby said his own coaching career (he’s quietly won 156 games at Salisbury) was influenced by Smith.

“The values, the idea of everyone being a family and being unselfish, those are things you try to instill in your own program,” Causby said. “His teams always were the model of consistency. Everyone strives for that.”

“Dean was a great coach and a great man, and it’s a shock that he’s gone,” Chrismon said. “He was a staple of life in North Carolina. He brought a lot of people together in this state, and a lot of great players wanted to be coached by him.”

East Rowan girls coach Danielle Porter is a Blue Devils fan now because she became good friends with one of Duke coach Mike Krzyzewski’s daughters when she attended a Duke camp, but she was light blue through and through growing up.

“My dad was a huge UNC fan and Dean Smith fan so I was a big Carolina fan growing up,” she said. “We went to a lot of the games, and I loved those Carolina teams with King Rice and Rick Fox (1987-91).

“I’m a Duke fan, but I’m very sad today. Dean was an all-time great, and I think we’ve been lucky in North Carolina to have someone like that representing our state for so long. Dean never tried to be anyone but himself, and we can all learn from that.”

For South Rowan boys coach Bryan Withers, Smith’s legacy extends beyond the basketball court. Smith was active in the battle for civil rights for black Americans in the 1960s and signed UNC’s first black scholarship athlete Charlie Scott for the 1967-68 season.

Scott wasn’t the first black player in the ACC, but he was the first huge star and an All-American, and he inspired a lot of people that followed him.

“Dean Smith opened up doors for a lot of guys,” said Withers who helped Salisbury High win a state championship in 1987 and performed well at UNC Wilmington. “Dean was my favorite coach. As a kid, I grew up dreaming of playing for him, but everyone in the country wanted to play for him.

“He was able to bring in tremendous talent, and that showed what kind of man he was. And he was a second father to a lot of those kids.”

Withers attended Smith’s basketball camp when he was in the eighth grade. The memories are still fresh. He learned things about basketball — and life — that he still uses every day with his team.

Former Tar Heel George Karl said Sunday that Smith was a “giant of a human being.”  Local coaches agree.