Susan Shinn column: Coach Dean Smith inspired excellence both on and off the court 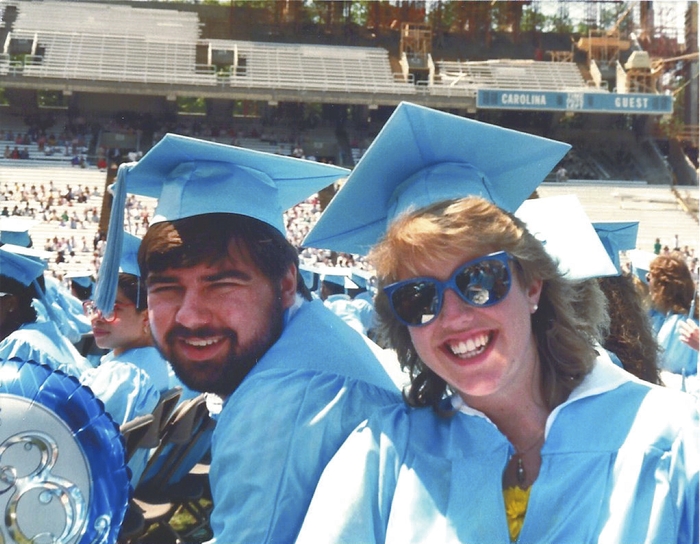 A picture from UNC graduation in 1988 showing Susan Shinn and her best friend at Carolina, Robert King, a native of Mooresville.

I arrived at Chapel Hill in the summer of 1984. For a girl from a town with one stop light, the University of North Carolina was a heady place indeed. I was listening to Billy Joel and Bruce Springsteen on my cassette player and wearing a lot of lace (that was during Madonna’s “Like a Virgin” phase — don’t judge me).

My parents dropped me off at Granville Towers East (“Where Convenience Is Standard”), and, according to the family scrapbook, my mother and my aunt made my bed. Then they bugged out (thrilled, I’m sure), and left me to explore Franklin Street and find my way to classes and get used to life on the Hill.

Looming above these halcyon days were Coach Dean Smith and Carolina men’s basketball. Michael Jordan had just bugged out of town that spring, lured by the NBA a year early, but there were plenty of other basketball player sightings — mainly because the team was housed in Granville South.

My best friend at Carolina, Robert King, actually met MJ one night when he (Robert, not MJ), was working the desk at Granville South. I was not quite that lucky, but I did run into Kenny Smith one day at lunch as we filled our soft drinks together in the cafeteria. This necessitated an immediate call home to my mother — from the land line — once I returned to my dorm room.

Carolina had just won the National Championship in 1982, so fan worship of Coach Smith and his players was in full swing. In Chapel Hill, we loved to say, basketball is religion, Dean Smith is God, and Heaven is a local call. (Only 25 cents, back in the day.)

We weren’t trying to be sacrilegious. We just really, truly loved Coach Smith. You’ll be reading over and over what a fine man he was, and that was true, too. I never had any personal Coach Smith sightings outside of Carolina games, but one stands out.

It was one of the first games in the Dean E. Smith Student Activities Center, a building Coach Smith had tried — and failed — not to have named after him. The “Dean Dome” was a veritable palace after the tiny Carmichael Auditorium.

(My freshman suitemate, Karen Margulies, who still lives in her native Florida, asked me today why I never went with her to a game in Carmichael. I told her I had no idea, but after reflection, I remember always hearing how hot it was in there, and if there’s one thing I hated — then as now — it’s being hot.)

Anyway, one of the first games in the new facility was against the University of Maryland. On Feb. 20, 1986, we Carolina fans were feeling pretty smug. After all, we were the number-one team in the nation. Well, let me tell you what, that smugness evaporated when a young Maryland player named Len Bias took to the hardwood, eventually scoring 35 points that night.

Something else happened that night, too. The kids in the student section behind one of the goals decided they were gonna be all cutesy like our dark-blue rivals 8 miles up Tobacco Road. They started waving their arms and screaming and generally acting crazy when a Maryland player attempted a free throw.

Coach Smith never took his eyes off the court. He held up one hand, the universal sign for “stop.”

Coach Smith inspired excellence both on and off the court. He made us want to be better, to do better, because he set the bar so high.

I know Coach Smith has some family in town, and my heart breaks for them, that they’ve had to lose their daddy and granddaddy twice. His daughter Sandy Combs and her husband, The Rev. Steve Combs, pastor of Milford Hills United Methodist Church, live here in Salisbury with their sons, Luke and Sam. But my heart also breaks for the whole Carolina family, across the state, across the nation, and beyond.

On Sunday afternoon, my son was playing in a tournament in Charlotte with his school team. In a couple of months, we’ll hear whether he, too, has the chance to wear light blue. I hope so. On such a beautiful day, I couldn’t help but think about laying out on the roof of Granville East and going to Burn Out and Spring Fest and Carolina Beach Blast and walking by Silent Sam in the springtime (I’ve never heard that damn gun go off yet) and hearing the Bell Tower play “Hark the Sound” and, of course, hollering our lungs out for Carolina basketball.

Godspeed, Coach Smith. You were and always will be a part of the Carolina Way. You made us all reach for greatness. You were our priceless gem.

Freelance writer Susan Shinn lives in Salisbury. She is a 1988 graduate of the University of North Carolina at Chapel Hill.

Ester Marsh column: You have to eat to lose…