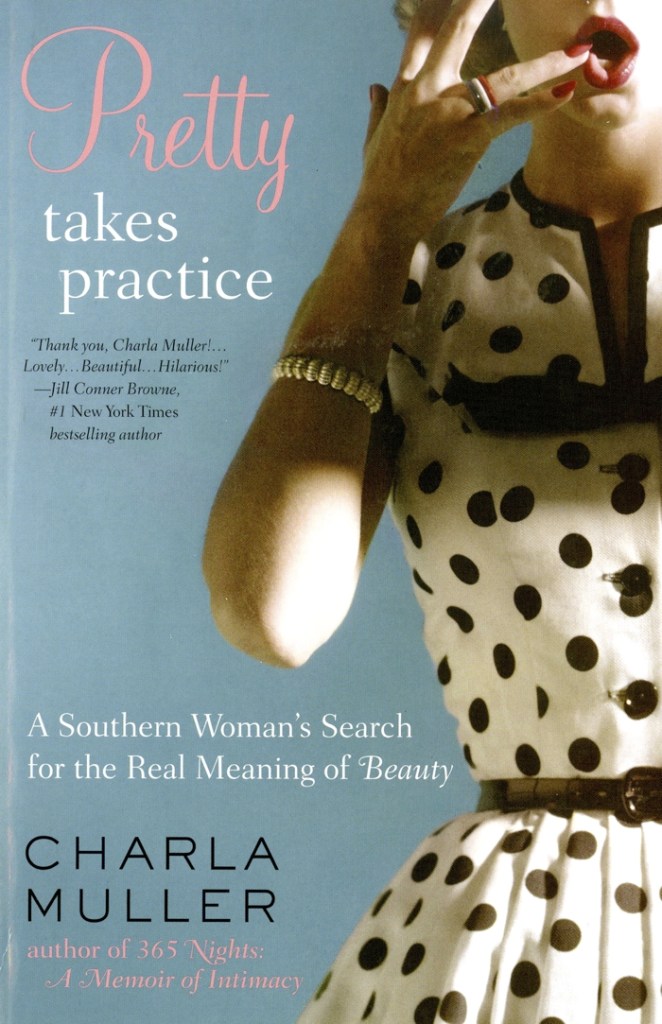 Charla Muller wrote a book titled “365 Nights: A Memoir of Intimacy.” It attracted quite a bit of attention. She was even on “Oprah,” on a big screen, in high definition.

Reality smacked her down flat.

Charla started a deep and often painful look at who she was and where she was and how some things needed changing. She had to lose weight, for one thing. She needed a better, more up to date wardrobe. She needed to pay more attention to herself because, as she says repeatedly in her book and her talks, “What we look like matters. It shouldn’t, but it does.”

Her approach, in “”Pretty Takes Practice,” can seem shallow and even insulting to people who do not meet the ideal, but as the book progresses, pretty takes on new meaning. Talking to her makes a world of difference. She’s funny, tolerant, a little insecure — human.

“I have gotten a really great response (to the book) from people who take in what it all means and what it doesn’t. … It makes for a very interesting conversation with women.”

She says she never intended to offend or hurt anyone. “I was trying to look through the screens, right or wrong, that I felt like I was viewed through.” Her Aha! moment was being on TV. She said she did not fully grasp how she had allowed her weight and appearance to change.

“We all struggle with self talk,” she says of the constant conversation, especially in women’s heads, of meeting expectations. “I thought I’d been working through that, but I had never gotten that kind of feedback, and on a national platform.

“I found myself allowing other people to have a point of view about how I was supposed to look or present. … It matters, there are days I wish it didn’t, but it does. I needed to take back and own, in a meaningful way, how I was going to put myself forward in the world. It was a work in progress that required external and internal work.”

She thinks she’s finally comfortable with herself again. Pretty, she says, should be more than the external. It should be about what your values are, how you serve others, how you are part of the world. Being pretty is not more important than other things, Charla says.

“It’s one of the struggles for women, where it ranks in our lives, and if we give it enough attention that we can feel satisfied, but not let it dominate everything we do.”

Because some of the book is tongue-in-cheek and self-deprecating, someone might be offended or think it’s frivolous, but Charla wants people to read the whole thing. “I know that we’re all doing the best we can. We’re trying to be authentic and real.

Charla says life experience is important to who we are and how we show up, how we present ourselves. She says “all the stuff about beauty and aging is about our mothers, the mother-daughter relationship, it’s so important.” She gave a copy of her book to a friend who read it with her teenage daughter. The teen loved the book because she learned she was OK. “I love doing mother-daughter events,” Charla says.

As a mother, she tries not to nag her kids about appearance, but she says she’s always taught them to eat right and take care of themselves, “so they don’t struggle with this later in life.” She thinks she has never actually used the word fat in front of her children. “It’s really important for them to understand it’s more than that. Who you are is more than weight, but at the same time, eat right, get enough sleep, be healthy. It feels good when you feel good.”

“I want people to read the book. I think it’s meaningful, and some people do this organically, to dig in and do the work. … Think about who you want to be. …Recognize the internal and external work is symbiotic and it all comes together in a meaningful way. … It’s how intentional and fully present we are, too.”

Library has books and other offerings for first-time moms