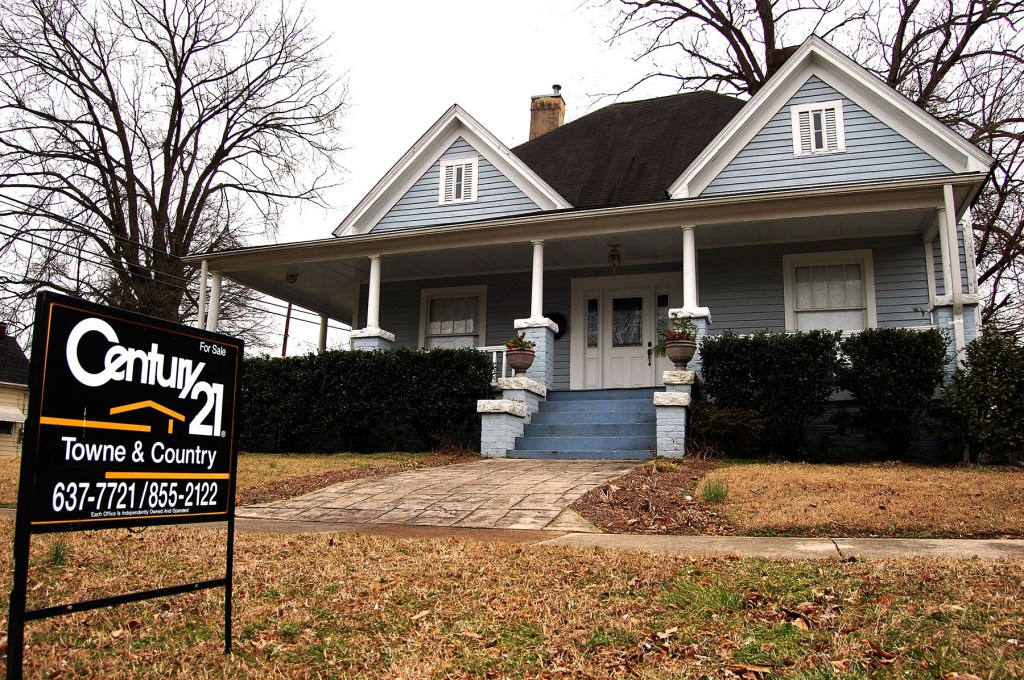 A home for sale in Spencer. The county's housing market has been making progress, but it is still on the mends.

The housing market in Salisbury and the rest of Rowan County has been improving in recent years, but it hasn’t recovered completely from the economic crisis, according to people who work in real estate.

The American housing bubble peaked in 2006 and began going downhill after that. The situation was further exaserbated  by the economic downtown in 2008 and home values continued to fall during the recession. Some people lost everything, and whole subdivisions, especially in the West, continue to look like ghost towns.

But for much of the country the last two or three years have seen an upturn in the housing market. In Rowan County, things appear to be improving, though the county still lags behind areas closer to Charlotte — benefactors of being closer to a growing urban market.

Bonzie Everson, with Wallace Realty, said things are improving but that it will probably be a year or two before there is a more stable market — but the market is stabilizing, she said..

She said there are plenty of positive results in a number of factors that affect housing and that 2015 is starting off well.

“I think we’re right on the cusp of something good,” she said.

But she said there are still hurdles to get over, including the local economy, which she said has a ways to go.

Also, the quality of an area’s schools plays a major role in the housing market, Everson said. Great schools keep families in the area and attract new families.

“Have to have good schools,” Everson said, “I certainly think we’re beginning to see that happening” here in Rowan County.

Doug and Jennifer Carroll like their home and neighborhood in the Crescent Country Club off West Innes Street out past Catawba College. And they love their jobs as physician assistants at Novant Health Rowan Medical Center — just as they love being a part of the church family at Salisbury First Baptist Church.

Originally from Virginia, 34-year-old Doug graduated from Catawba and said he and his wife enjoy living here, but are wondering if there are better places, like Mooresville and Concord, for them to raise a family — they’re thinking about having children in the coming years.

There’s more to do and the schools are better, Doug said about Mooresville and Concord.

He said some of their co-workers at the hospital commute from  Mooresville because they don’t think there is much to do in Salisbury.

Doug said people in the Crescent neighborhood who are trying to sell their homes are finding it difficult.

There’s just no demand in the area for higher-priced homes, Doug said, adding he doesn’t see how the value of his home can continue to fall.

“The reality is that all the homes that are selling are selling below value,” he said about this neighborhood.

Doug said he hopes the new county Board of Commissioners can bring good, high-paying and professional jobs to the area to attract younger people.

He added he’s encouraged by the fact that businesses like Hobby Lobby and Dick’s Sporting Goods are coming here.

“We’ve invested so much in Salisbury,” he said, “We just want to see it do better.”

Matt DeBoer, with Helen Adams Realty, recently moved back to Rowan County and said he sees good signs and potential in the housing market here.

He shared data showing the number of new home listings per month in the county has been increasing since 2011, and so has the average price per square foot for home sales — from $58 in 2011 to $75 last year.

“Overall, the market is recovering across the board,” he said.

DeBoer said he thinks the major thing holding back the housing market is fear. He said a lot of people still have worries about buying and selling homes.

“There is a definite amount of just getting over the fear after what happened when the housing bubble broke,” he said.

DeBoer said the mood among Realtors is “cautiously optimistic.”

Since 2011, the average number of closings (finalized home sales) per month in the county has increased from 50 to 74 in 2014, according to data from CarolinaMLS

DeBoer said things will continue to get better if interest rates stay aggressive and the county can bring good-paying manufacturing jobs to the area.

Bob Yon is a computer engineer but has been working in real estate in Rowan County on the side since 2009.

He said he does some “flipping,” meaning he’ll buy a home, many times one that has been foreclosed on, at a low price and fix it up before selling it. He also rents properties and helps people sell their homes. He typical works will homes valued at or below $150,000.

Overall, Yon said, the housing market is getting better but things are still “pretty flat” and the county is lagging behind other areas such as Concord.

He said it’s currently a “buyers market” in Rowan County — meaning there is a lot of inventory in the housing market.

One problem, Yon said, is that a lot of people are still having trouble getting financing from a bank in order to buy a home.

He said banks will turn people down at the last minute, which has led him to do a lot of owner-financed sales.

“I think what’s really holding us back in Salisbury is the quality of the schools,” he said.

When people look at websites that compare housing markets, such as Zillow.com, they see better ratings for schools in Concord and Mooresville than in the Salisbury area.

“I think the school scores are a real factor in the depressed market in the area,” Yon said.

Yon helped start the Salisbury Real Estate Association as a way to bring energy to the local housing market. He said if the local economy starts growing faster the housing market will continue to improve.

Even though things appear to be on the upswing, Everson said, “It’s sad to look back and say we didn’t appreciate the good times when we had them.”