Costume Man: Smith loves to build them, hates to wear them 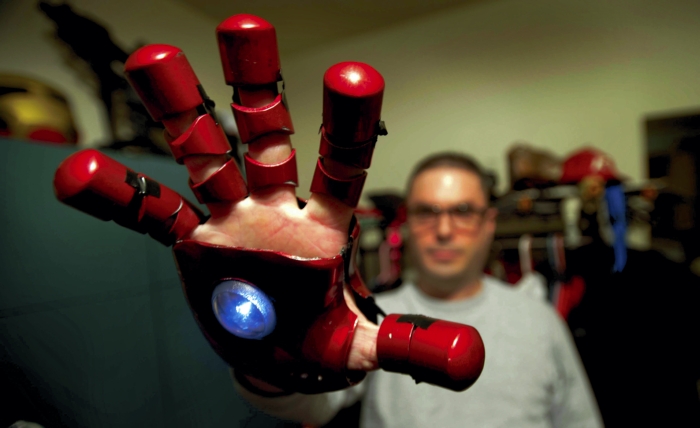 JON C. LAKEY / SALISBURY POST Robert Smith enjoys collecting and building full size superhero costumes. Smith adapted PVC pipes to make the fingers for his Iron Man costume. The wrist part came from with the rest of the costume. His first costume was a Captain America outfit that was custom made by sewing together the fabric from three sweat suits. His collection has grown and many are worn regularly at costume conventions, local comic book stores and during the Faith 4th Parade. Wednesday, February 4, 2015, in Salisbury, N.C.

SALISBURY — By day, mild-mannered and bespectacled Robert Smith is a retired Air Force veteran working as a supply clerk at the Hefner VA Medical Center.

By night and on weekends, Smith transforms into Batman, Captain America, Iron Man, the Red Skull, Rhino, Sniper Wolf — even the Ether Bunny.

Smith is part of an ever-growing phenomenon known as “cosplay” — a combination of the words “costume” and “play” — in which the participants dress in costumes to portray fictional characters from comic books, cartoons, video games, action films, and anime (Japanese animated productions).

You see them at comic book, monster and heroes conventions; comic book stores; charity events; festivals; parades; and even competitions set up exclusively for cosplay. They are part role players, part performance artists, and they inhabit an interesting subculture in which you could see many of the characters on “The Big Bang Theory” fitting in.

Most of the serious enthusiasts view it only as a hobby, as Smith does, but he goes a step farther by constructing his costumes, and that’s where he derives most of his satisfaction from cosplay.

“I love to build them,” he says, “but I hate to wear them. There’s no such thing as a comfortable costume.”

What was supposed to be the formal dining room in Smith’s Salisbury home has been transformed into a giant wardrobe for his costume creations. He actually builds, repairs or tweaks his costumes in another dedicated room upstairs.

Smith, 44, stops at his Batman, which he made in connection with the premiere of the movie “Dark Knight.” Though he’s 5-11, when he dons the Batman costume, Smith becomes 6-4.

“It’s very intimidating because of the size,” he says.

When the cape furls out, it seems wide enough to engulf a family of four.

Becoming Batman can be transformative. Smith says everybody loves the Caped Crusader, so this particular costume automatically draws a lot of attention. He likes that he can go three hours or so as Batman at any gathering and not really have to talk to anyone.

“The Batman is the one in which I feel way more different,” Smith says.

His Iron Man costume on the other side of the room is a sculpted, red, Fiberglas shell of muscle. Smith chastises himself a bit, because it’s a better fit for someone 5-8 than 5-11. “I think it looks awkward on me,” he says. “I put a lot of work into that costume to make it look good.”

He demonstrates how he made his Iron Man fingers out of PVC end caps and other pieces.

Cosplay enthusiasts who make their own costumes infuse a bit of their own personality, combine different genres or even make original characters.

For his version of Rhino, to make the character’s head, Smith used a kid’s helmet from Dr. Who, expanded the sides and added details such as the horn, ears and eyes that burn red. In all, the costume took him about three months to build.

For his Ether Bunny, which includes a giant rabbit head painted a fluorescent green, Smith employed a Clone Trooper’s backpack to hold ether canisters, which are really PVC fittings. He used a shower hose as a tube leading to the Ether Bunny’s respirator mask.

Hanging in the corner of a room is Smith’s first costume, a Captain America outfit that his mother sewed together for him. It’s made from three different sweatsuits, and his shield came from the parts of an old sled. He wore this Captain America suit to a 1991 radio station-sponsored Halloween party at the Greensboro train station.

A pair of friends who went with him were dressed as Batman and Wonder Woman.

As a kid, besides loving Halloween as a holiday, Smith collected action figures, especially those from the “Star Wars” movies. He purchased a Stormtrooper’s kit to make his first costume in 2001.

Smith took a medical retirement from the Air Force in 2007 after 15-plus years of service, and he and his family moved from Pensacola, Fla., to Rowan County that same year to be close to his parents and in-laws. Smith is originally from Greensboro.

In time, Smith struck up a friendship with Ray Franks, owner of the Comic Monstore in Salisbury, and also a member of the band Graveyard Boulevard. In costume, Smith often is part of the stage show accompanying the band’s performances.

You also may have seen Smith in one of his costumes at the Faith Fourth of July Parade, at downtown Salisbury events and at the Comic Monstore, besides his attendance at the regional conventions where cosplay rules.

Smith says his favorite costume is Buck Rogers, one of the original comic book heroes from the 1930s era. He fashioned his Buck Rogers headgear by modifying a MiG fighter pilot’s helmet. Smith says the whole Buck Rogers costume is gorgeous and comfortable to wear, and he just likes the history associated with  Buck Rogers.

“I love everything about it,” he adds, but when he wears it, “nobody cares for it whatsoever.”

No doubt more costume-building is in Smith’s future. He thinks his next one will be Dr. Doom from the Fantastic Four.

As you look around the room and wonder where Smith could possibly squeeze in another costume, Smith reminds you of his cosplay reality.

“This isn’t everything,” he says.