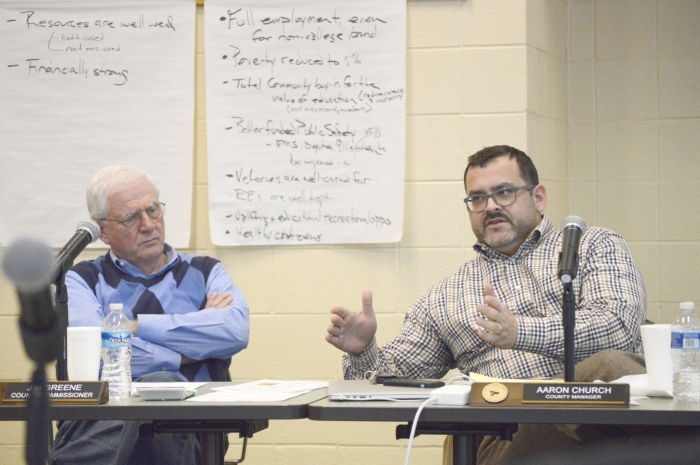 In the waning hours of a lengthy, two-day planning retreat, commissioners laid out several short and long term goals for the future of Rowan County.

For 16 hours over two-straight days, county government’s top staff members and commissioners this week discussed policy and financial decisions that could go a long way in determining Rowan’s future. In the retreat’s final few hours on Friday, commissioners focused on goals and priorities. The end result was a series of goals applying to infrastructure, economic development, education and county services.

A handful of priorities were discussed at greater length, while others were simply mentioned. Perhaps unsurprisingly, discussion on economic development lasted the longest period of time. Not only has it been a priority for commissioners since the three newest ones in December were sworn in, but economic development was also a frequent topic during the campaign season.

Commissioners didn’t spend an extensive amount of time on infrastructure, agreeing that several important requirements remain before one of the largest issues — space needs — can be addressed. A permit for government services and the final results of a nearly complete space needs study were among the items listed by multiple commissioners.

Constructing a building, commissioners agreed, was a longer-term goal because of associated costs.

One of the more thoroughly discussed topics in the economic development category was an incentive for businesses expanding locally. Commissioner Craig Pierce used New Sarum Brewery as an example. The brewery — run by the same family as the owners of the restaurant Salty Caper in downtown Salisbury — received incentives in October 2014 as it looked to move into a building on Depot Street. One criticism during the process of awarding incentives was that no incentive model existed for locally grown businesses.

“It would’ve been nice if Robert already had something in his briefcase,” Pierce said, referencing the New Sarum incentives.

Several other items discussed as a part of economic development were proposed by Chairman Edds.  At one point, Caskey joked that the commissioners should’ve created a category just for Edds’ ideas.

Two of the ideas mentioned by Edds were a task force that would specifically look at the best ways to take advantage of High Rock Lake. He called it the “Lakes and Rivers Task Force.”

“We’re talking about a group of folks who live down at the lake and folks even from Davidson County,” he said. “It could be tourism. It could be recreation. The task force would come back to us with recommendation on what the entire community could do to jump-start our lake economy.”

Another idea mentioned by Edds was increasing the amount of information available about property — private or government owned — that would be an attractive location for industrial facilities. Edds said part of the effort would help organize property owners adjacent to each other. So, for example, two adjacent property owners would charge the same per-square-acre price for land if both pieces are needed for an industrial facility, he said.

The greatest source of priorities pertaining to education was Caskey. Two ideas discussed were finding funding, if needed, for middle school resource officers and free tuition for Kannapolis City Schools at Catawba College.

Earlier this year, Fred Stanback granted the Rowan-Salisbury School System $300,000 to fund tuition for master’s degrees in teaching science or math. Caskey said he’d like to see if Rowan County government could wrangle up enough funding to make a similar proposal for Kannapolis City Schools possible.

“If it doesn’t come back next year, we’ll have to decide about funding for it,” he said. We’ll have to decide if we’d like to pay for all of them or just the ones in the county. It’s approximately $50,000 per person for benefits and salaries.”

Commissioners discussed a wide breadth of priorities under the services category and agreed to move forward with at least two measures — creating an animal shelter task force and rewarding employees for exemplary work.

The animal shelter task force sprung from a discussion started in a morning session on Friday about animal control. Pierce asked to discuss guidelines for volunteers at the shelter and find a way to streamline the shelter’s processes to increase the adoption rate.

Commissioners tossed around the idea of gathering a group of volunteers, shelter employees and county officials to address any any animal-control related topics. Initially, the commissioners thought about creating a committee of various people, but the term “committee” brought up discussion of ensuring the right amount of autonomy and authority.

Instead of using the work committee, Commissioner Judy Klusman said the term “task force” would more directly reflect the purpose of the group.

“If we want to make it as formal and short as possible, even when you say, committee, that may be too much,” Klusman said. “If you have a task force, there’s a beginning and an end and it’s done and everyone would understand.”

A topic brought up by Caskey was giving County Manager Aaron Church the authority to reward employees in small ways for awards or top-notch work.

“We haven’t given [Church] the authority to do anything for the employees, whether it’s a gift card or a vacation day,” Caskey said. “That way he doesn’t have to come to the commission every time he thinks an employee should be rewarded.”

Despite the fact that all five commissioners were present for the planning retreat, official votes weren’t taken. However, some of the topics discussed would require board action at a later date, such as a Rockwell EMS station purchase.

Governor to visit Salisbury as part of tax credit…