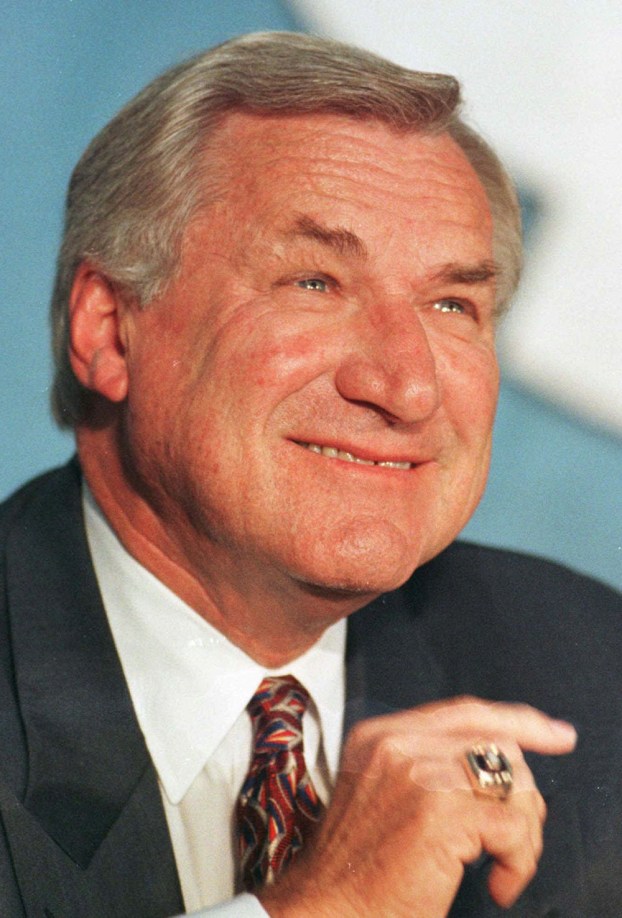 The Associated Press In an Oct. 9, 1997 file photo, North Carolina basketball coach Dean Smith smiles during a news conference in Chapel Hill, N.C.,where he announced his retirement. Smith, the North Carolina basketball coaching great who won two national championships, died "peacefully" at his home Saturday night, Feb. 7, 2015, the school said in a statement Sunday from Smith's family. He was 83.

Dean Smith was more than simply a basketball coach.

Yes, the retired Hall of Famer left North Carolina as the winningest coach in men’s history after capturing two national titles along with the 1976 Olympic gold medal and coaching some of the sport’s biggest names, Michael Jordan among them.

But he also was an innovator who left a lasting influence on the sport, as well as someone known for his stand on civil rights driven by the belief that it was the right thing to do.

Smith died “peacefully” Saturday at age 83 at his Chapel Hill home, his family said in a statement released by the school Sunday. He was with his wife and five children.

Roy Williams, the current Tar Heels coach and Smith’s assistant for 10 years, said his mentor was the “greatest there ever was on the court but far, far better off the court with people.”

“I’d like to say on behalf of all our players and coaches, past and present, that Dean Smith was the perfect picture of what a college basketball coach should have been,” Williams said in a statement. “We love him and we will miss him.”

Smith kept a lower profile amid health issues in recent years, with his family saying in 2010 he had a condition that was causing him to lose memory. He was unable to travel in November 2013 to receive the Presidential Medal of Freedom, the nation’s highest civilian honor presented to Smith as much for his work off the court as on it.

At the urging of his pastor, he recruited black athletes, and in 1967 made Charlie Scott the school’s first black scholarship athlete and one of the first in the segregated South.

In a statement Sunday, President Barack Obama said Smith “pushed forward” the civil rights movement with Scott’s recruitment as well as helping integrate a restaurant and a neighborhood in Chapel Hill.

Smith “showed us something that I’ve seen again and again on the court — that basketball can tell us a lot more about who you are than a jumpshot alone ever could,” Obama said.

On the court, his “Four Corners” time-melting offense led to the adoption of the shot clock to counter it. The now-common “point to the passer,” in which a scorer acknowledges a teammate’s assist, became a hallmark of Smith’s always humble “Carolina Way.”

He was a direct coaching descendent of basketball’s father, James Naismith, playing and later coaching at Kansas for the inventor of the game’s most famous student, Jayhawks coach Phog Allen.

At UNC, he tutored perhaps the game’s greatest player in Jordan — who burst onto the national stage as a freshman by hitting the winning shot in the 1982 NCAA final — and two of basketball’s most successful coaches, fellow Hall of Famers Larry Brown and Williams.

When UNC held a reunion for its 1957 and 1982 championship teams in 2007, Smith drew the largest applause from the crowd in the arena bearing his name, even as he stood alongside Jordan and fellow Tar Heel great James Worthy. During the ceremony, Jordan put his arm around Smith and kissed him on the head.

In a statement Sunday, Jordan said Smith was “more than a coach — he was a mentor, my teacher, my second father. Coach was always there for me whenever I needed him and I loved him for it.”

Smith’s only losing season was his first, and he left the game in October 1997 having surpassed Kentucky’s Adolph Rupp as the winningest coach in Division I men’s history with 879 wins in 36 seasons — a record now held by Duke Hall of Fame coach Mike Krzyzewski.

“We have lost a man who cannot be replaced,” Krzyzewski said in a statement. “He was one of a kind and the sport of basketball lost one of its true pillars.”

Smith led the Tar Heels to 13 Atlantic Coast Conference tournament championships and 11 Final Fours, winning NCAA titles in 1982 and 1993. Along the way, more than 95 percent of Smith’s lettermen graduated while more than 50 of his players went on to play in the NBA or ABA — including Phil Ford, Brad Daugherty, Jerry Stackhouse, Rasheed Wallace, Vince Carter and Antawn Jamison.

Smith seemed uncomfortable with the attention that came with breaking Rupp’s record. When former Indiana and Texas Tech coach Bob Knight was on the verge over taking it over in 2007, Smith noted with a sarcastic smile, “I’m going to cry about that.”

“But still, it’s something that, we do it for the team,” Smith said. “When they’re excited, that’s why we’re in this field. I’m sure it’s that way with Bob Knight. It’s never one of his goals and certainly was never one of mine.”

Born Feb. 28, 1931, in Emporia, Kansas, the son of public school teachers, he graduated from Kansas with a communications degree in 1953. He played for the Jayhawks teams that won the NCAA title in 1952 and finished second the next year.

He served as an assistant coach at Kansas to Allen and Dick Harp before joining the Air Force, then joined Frank McGuire’s staff at UNC in 1958. When McGuire left for the NBA in 1961, the university tapped the 30-year-old Smith to take over.

Smith went 8-9 in his first season and was even hanged in effigy after a loss in January 1965 before his breakthrough run of three straight Final Fours in the late 1960s. His 1982 team beat Patrick Ewing and Georgetown in the final, then his 1993 team beat Michigan’s “Fab Five” for his second crown.

In addition to wife Linnea, Smith is survived by daughters Sandy, Sharon, Kristen and Kelly; son Scott; and several grandchildren.

Funeral plans were not announced.

SPENCER — The National Letter of Intent was sent to Hampton on Wednesday. So, Friday’s gathering in the library for... read more