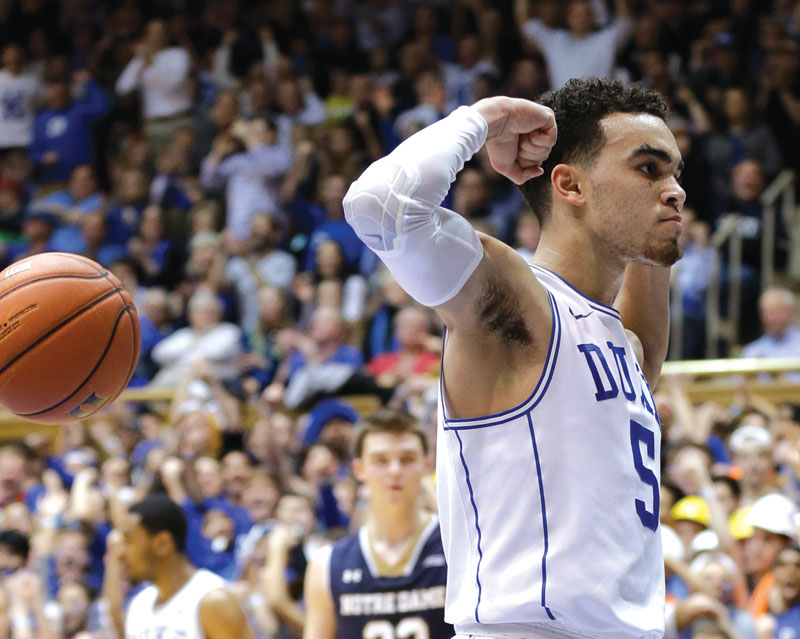 DURHAM, N.C. (AP) — Justise Winslow and Jahlil Okafor put the D back in Duke — and ran Notre Dame off the floor.

Winslow had 19 points and 11 rebounds, and the fourth-ranked Blue Devils used a huge early run to rout No. 10 Notre Dame 90-60 on Saturday.

Okafor added 20 points and 10 rebounds. Matt Jones had a career-high 17 points off the bench, and Tyus Jones scored 12 for the Blue Devils (20-3, 7-3 Atlantic Coast Conference).

Steve Vasturia had 15 points but top scorer Jerian Grant was held to just seven on 3-of-10 shooting for the Fighting Irish, who won the previous meeting 77-73 on Jan. 28.

This rematch was all Duke.

Playing before a crowd infused with an energy usually reserved for rival North Carolina, the Blue Devils clamped down on the nation’s most efficient offense and built an insurmountable lead during what coach Mike Krzyzewski called “the best half we’ve played this season.”

“We have not executed that way in a long time on both ends of the court,” Krzyzewski said. “It was almost perfect.”

A comeback-capable Notre Dame team — the Irish rallied from 18 points down to beat North Carolina State on the road two weeks ago — never got closer than 18 in the second half of its worst loss since Villanova beat them 93-62 on Jan. 7, 1999.

“Their ball pressure harassed us, bothered us and never let Jerian Grant or any of us get into rhythm,” Notre Dame coach Mike Brey said. “It was one of those where you’re hanging on for dear life, and in this league, you’ve got to have a short memory.”

Notre Dame entered averaging a Division I-best 1.2 points per possession, and led the ACC with an 80.8-point scoring average. The Blue Devils — who faced questions about their defense after back-to-back losses last month — held them to two baskets in 11 early minutes and needed about 15½ minutes to build a 30-point lead.

“This is the defense that coach envisioned us playing the whole year, this type of intensity and … shutting teams down, the athletes we have,” Winslow said. “It just so happened that all eight guys were locked in, and when you have a game like that when everyone’s so focused and into the game, you get something special like that.”

Perhaps most impressively, they did it almost entirely without Okafor. The preseason All-American picked up two fouls in 16 seconds and sat for the final 11:57 of the half.

Matt Jones, who recently took over as Duke’s sixth man, matched his previous scoring high of 13 points in the first half while hitting three 3s in a 5-minute span.

Winslow gave Duke its largest lead to that point when his 3 — the Blue Devils’ seventh of the half — made it 43-13 with 4½ minutes left.

Duke guards Tyus Jones and Quinn Cook combined for 12 assists and no turnovers. … Krzyzewski improved to 20-2 against his former assistants. Brey was on Duke’s staff from 1987-95.

“When you go through one like that, I always go through the stat sheet to make sure it only counts as one loss,” Brey said.

Notre Dame: Demetrius Jackson added 11 points for the Fighting Irish. Grant, Pat Connaughton and Zach Auguste — who combine to average 44.5 points — finished with a combined 16 points on 6-of-19 shooting.

Duke: The Blue Devils earned their 18th straight 20-win season and their 30th in Krzyzewski’s 35 seasons at the school.