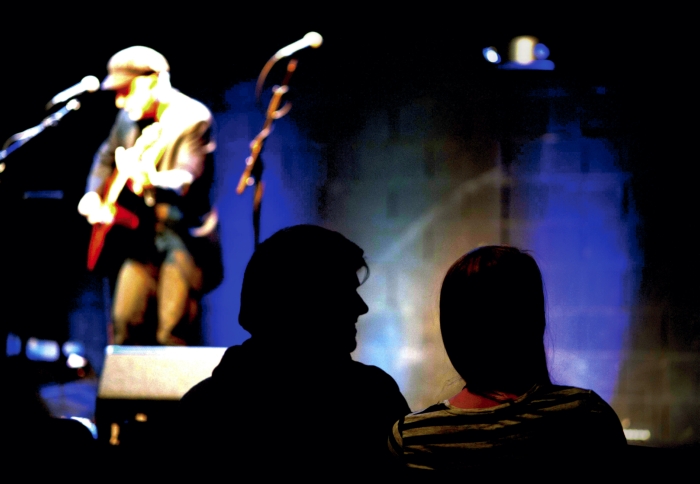 JON C. LAKEY / SALISBURY POST Piper Hightower (right) planned a surprise trip to a Phil Keaggy concert for her husband Paul for his 30th birthday. The Hightowers then made their way from their home in Loomis, California to Salisbury to catch up with Keaggy as he was set to perform at the Lee Street Theater on Friday night. Piper also worked out in advance to be able to sit in on Keaggy's sound check before the concert and was also able to join a few others for a special back stage visit with the master guitarist before the concert. Friday, February 6, 2015, in Salisbury, N.C.

SALISBURY — Sitting on a long couch in the Lee Street Theatre dressing room, Phil Keaggy seemed to be experimenting with his guitar. As his fingers danced back and forth, the notes mesmerized his six backstage guests.

When Keaggy stopped, he did something unexpected but gracious. He passed his Olson guitar over to Paul Hightower, sitting next to him.

Hightower couldn’t believe he was sitting in Salisbury, N.C., holding Keaggy’s guitar, but he wasted no time in picking out a tune and winning the approval of his wife, Piper.

“It plays like butter,” Keaggy said, smiling. An almost speechless, but happy Paul Hightower nodded his head in confirmation.

In late December at their home in Loomis, Calif., Piper Hightower asked Paul what he would consider a dream 30th birthday. He told Piper it would be a night with her, listening live to the music of acclaimed guitarist Phil Keaggy.

Piper decided to go for it. She wanted to surprise Paul and fold a Keaggy concert into a longer trip. She narrowed her concert destinations to Kansas City or North Carolina, before settling on Friday’s concert date in Salisbury. Meanwhile, she went to Keaggy’s website and wrote a message to Keaggy’s road manager.

She asked about arranging an opportunity for Paul to meet Keaggy in person.

Their conversations led to the manager’s setting up a time for the Hightowers to attend Keaggy’s sound check prior to Friday’s concert and the chance to meet him one-on-one with some backstage passes.

Piper still had some work to do back in Loomis. She talked with Paul’s bosses and arranged his time off, as well as her own. Without telling Paul where they were going, she asked his permission to spend the money they had been saving for a new couch to pay for plane tickets.

In the days leading up to their departure, Piper told Paul only what temperatures he should be packing for. It wasn’t until they arrived in Charlotte Wednesday night that Piper finally revealed the ultimate destination — the dream concert in Salisbury.

The couple spent a day in Charlotte and most of Friday in Salisbury, having coffee at Koko Java, eating lunch at Sidewalk Deli and touring the town in general. After Friday’s concert, they planned to eat at the Salty Caper.

Justin Dionne, general manager for Lee Street Theatre, learned the Hightowers were making the cross-country trip, and he arranged for the Rowan County Convention and Tourist Bureau to have welcome bags delivered to them at the theater.

“Everyone’s so helpful,” Piper said. “Everybody we meet tells us the next place to go.”

Even though it was Sidewalk Deli owner Rick McCombs’ own birthday Friday, he made sure the Hightowers received a free piece of pie for dessert.

Though the pie was great, the highlight of the day came, of course, when the Hightowers arrived at Lee Street Theatre about 5 p.m., met Keaggy and sat through his sound check with two other couples — Tedd and Susan Smith of Midland and Bill and Wendy Hayes of Salisbury.

Keaggy then invited the three couples backstage to the McKinley Dressing Room where they spent almost an hour together, chatting, hearing some of Keaggy’s experiences over 48 years of touring and listening to him pick out some melodies.

Do young people travel across the country to see him all the time?

“They’re just extreme people,” he said. “I appreciate it. It just blows my mind.”

Keaggy said he grew up being “a jam band dude, and some of that leaks out of me.” He described himself as becoming a hippie guitar player who wanted to be famous someday. By 1970, his band Glass Harp was growing in popularity in Ohio and opening for the likes of Yes and the Kinks.

But his mother’s death in a 1970 car accident proved to be a turning point in Keaggy’s life. He said he saw how his older sister’s faith allowed her to find joy and hope in their mother’s passing, and it was then he devoted himself to the Lord. By 1972, he had decided to leave Glass Harp for a solo career.

Over the coming decades, Keaggy became one of the most recognizable names in the Christian music industry, winning numerous Dove Awards for his instrumentals and being recognized by Guitar Player magazine as one of the top finger-style guitarists.

He has had an influence on several generations, including Hightower’s.

Bill Brownell, a friend of Hightower’s family once gave Paul’s father a Phil Keaggy recording — the 1992 Celtic-influenced “Beyond Nature.” Paul has vivid memories as a kid listening to that album as he and his dad traveled in the family car together. He said it always reminded them both that “when times are hard, God is with us.”

Before he died in 2003, Brownell had always told Hightower never to be afraid of playing his guitar and, not surprisingly, Paul wanted to play like Keaggy.

“If anything,” Hightower told Keaggy Friday night, “you encouraged me to keep going.”

Keaggy was humbled. Sitting nearby, Piper said Paul has become a good player in his own right.

The Hightowers married just last May. Ted Smith told the couple he and Susan received some good advice when they wed: Always go to bed at the same time, never talk about money after 8 p.m., and never go to bed angry. The Smiths will be married 37 years next week, and their trip to Keaggy’s concert Friday was an anniversary celebration.

Touring since 1966, Keaggy said he doesn’t like the road any longer, but he still loves people and the chance to play his guitar for them. He acknowledged that he probably puts too much pressure on himself when he performs.

He’s afraid part of his audience will want him to be real spiritual, while others will want to be wowed by his guitar playing.

“I just want to interact with them,” he said.

Keaggy said he has a chance to be a different person when he rejoins, on occasion, his old buddies in Glass Harp.

Keaggy and his wife, Bernadette, live in Nashville now, and they have three grown children, ranging in age from 35 to 27.

These are the kinds of things you learn from one of your idols as you sit around, chat and share some tunes.

Could her 30th birthday surprise for her husband have gone any better? Piper Hightower doesn’t think so, and she couldn’t say enough about Keaggy’s kindness.

“It just says a lot about Phil as a person and the things he cares about,” she said.