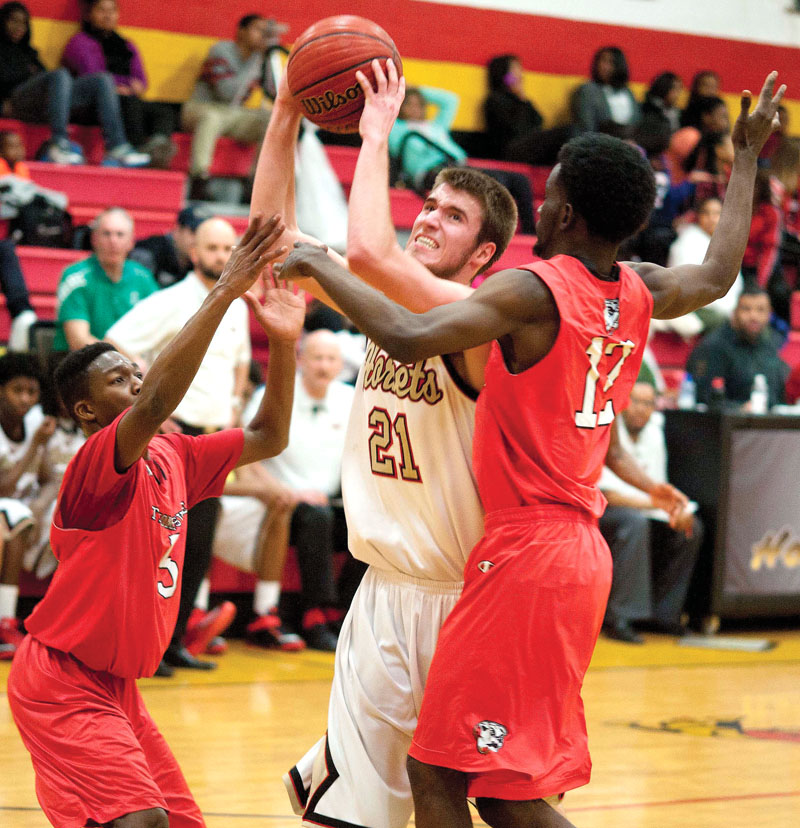 SALISBURY — The Salisbury Hornets carried out its game plan the way it intended Friday night except for one major problem: the ball didn’t go in the basket. Thomasville escaped with a 51-45 win thanks in part to its own strong guard play, but also thanks to the point-blank futility of its opponent.

“Sometimes you have those nights where the shots are just not falling,” said junior center Wes Fazia. “You just have to bounce back, go to practice and get ready for the next game.”

He led the team with 15 points before fouling out with 2:30 left

The win for the Bulldogs (8-10, 4-4 CCC) was important because it was their third in a row and tied them for third place in the Central Carolinas Conference with Salisbury (14-8, 4-4 CCC). With just two game left in the regular season next week, a top three seed is definitely at stake.

Both play second place North Rowan next week as well.

Salisbury played with a different line-up and rotation for the game due to some call-ups from the JV team replacing players who left the varsity squad. It also sat out top scorer DeShawn Troutman for the game for disciplinary reasons.

But the Hornets still had their big guys down low including Fazia (6-7), Tre Oats (6-7) and DJ Alexander (6-4). They had the looks they wanted especially in the second half but just could not covert.

Joining Fazia in double figures for the Hornets was Oats with 10 while Alexander had 8 points and 13 rebounds.

“Our problem was we had too many turnovers in the second half,” said Hornets coach Jason Causby. “But in the third quarter when we had an opportunity to take control, we just could not score the ball. We missed point blank looks.”

After a tight first half , both teams went on a scoring drought in the third period won by the Bulldogs 6-4. Salisbury’s frustrations included five turnovers and no baskets from the field. Only four foul shots kept them close at 30-25.

Thomasville’s speedy guard tandem of Tyquan Anderson and Jahare Taylor-Thomas took control in the final period by controlling tempo, hitting the key free throws and feeding the ball inside for easy lay-ups. The Bulldogs expanded a four-point lead to 46-34 with just under two minutes to play on Anderson’s fast break lay-up. A long 3-pointer by John Yang and a lay-up by JV call-up Uriah Kennedy cut it to 47-43 with :38 seconds left.

But the Bulldogs converted four of six foul shots the rest of the way to win 51-45.

“We were able to run off some clock and make our free throws,” Thomasville coach Gil Maxwell said. “It was a big win for us and we control our own destiny the rest of the way.”

Alexander and Taylor-Thomas led the winners with 13 each.