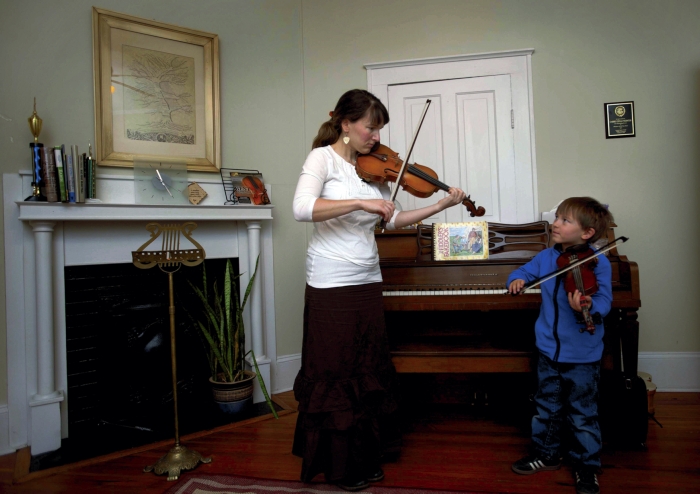 JON C. LAKEY / SALISBURY POST Carrie Ezzell Webster and her 5-year-old son, Gabe, practice the fiddle in the main classroom of the school. Webster's dream of opening a local Folk Art School is beginning to take shape. A long time violin and fiddle teacher, she is adding on instructors that will knowledgeable in the teaching the playing of different folk instruments. Webster's husband Eric, who plays standup bass in the band No 9 Coal, may also step in help students. Thursday, February 5, 2015, in Salisbury, N.C.

They’re starting their new folk art school modestly with a waiting room and an adjoining classroom where Carrie, Eric and other instructors give bluegrass-inspired, individual lessons for guitar, fiddle, banjo, mandolin, upright bass, dobro and dulcimer.

Elsewhere in the house, Eric mans the office for his real estate appraisal business, The Webster Group. Upstairs, there’s a recording studio for the Salisbury band, No. 9 Coal, for whom Eric plays.

The house has plenty of room for growth, and the Websters hope someday Carolina Folkworks expands beyond music to include instruction on things such as pottery, basket-weaving, glass-making, carving, gardening, knitting — activities you might find on a larger scale at the well-known John C. Campbell Folk School in Brasstown.

Local musicians know the Websters. Eric, who plays the upright bass and mandolin, used to be part owner of the Stringfellows store downtown. He once performed with Mercury Dime, the opening band for 10,000 Maniacs.

The classically trained Carrie has played in several symphonies and chamber music groups as a violinist. As a fiddler, she has performed as a soloist with the Salisbury Symphony, won numerous fiddler conventions and was honored last year at the Granite Quarry Civitan Fiddlers Convention for her “outstanding service to bluegrass and old time music.”

After the birth of her first child, Gabe, who will be 5 Saturday, Carrie started teaching the fiddle at home until Eric suggested that she move her lessons permanently to his office/house at 1516 S. Main St.

The seed for the folk art school was planted.

Eric claims it was a selfish proposal. He wouldn’t have to tidy up their own home as much if students were going somewhere else.

Also, with the nationally touring Sweet Potato Pie, Carrie had found herself away from family three and four days at a time.

“It was really hard for me,” she says. “I wanted to do something closer to home.”

Sealing the deal was the birth of Adelaide, the Websters’ 3-month-old daughter. But it really wasn’t much of a stretch for the couple to consider opening a folk music/folk art school.

“We love bluegrass, music festivals — all folk arts,” Carrie says, and the couple constantly had people coming up to them asking, “Do you teach?” or “Do you know someone who gives lessons.”

To fill that need, Alex Edwards will be the banjo instructor for Carolina Folkworks. Part of the bluegrass/gospel group The Edwards Family, Alex won the title of South Carolina State Banjo Champion at Renofest last year. He also has been Banjo Champion of the Year at Fiddler’s Grove, and he has captured second place in the banjo competition at MerleFest.

Though she’s an accomplished fiddler, 34-year-old Carrie Webster says it means more to her today to see her students doing well at local competitions and, better yet, to watch them meld into a circle of bluegrass players and latch onto a melody.

“It really makes me happy,” Carrie says. “The older people at the jams just eat them up.”

She says her students love the acceptance, receive a lot of positive reinforcement, and that kind of experience keeps them playing. She’ll sometimes take her younger students to local bluegrass jam sessions, which occur on a regular basis in Rowan County.

They also play at local events and festivals, in twice-a-year recitals and at nursing homes.

Carrie Webster thinks bluegrass music seeps into your bones and never leaves. Her students — children, teens and adults — eventually internalize the music, “and it’s something they can do the rest of their lives,” she says.

The Websters, who like to pile into their camper and head off for music festivals, also tout bluegrass music as family-oriented. Carrie says she has a lot of young students whose parents are musicians themselves.

Gabe already is playing the fiddle at her house, and Carrie predicts Addie will be a guitar or banjo player.

Playing the violin is about perfection and getting each note exactly right. But playing the fiddle leaves room for interpretation with the basic melody. Fiddlers learn to play as much by ear as by notes, and they employ, for example, a lot of slides to get into notes.

“There’s a lot more freedom and a lot more creativity,” Carrie says, explaining how she will sometimes give her students a basic tune such as “Angelina Baker” and ask them, as homework, to come up with three improvisations of the tune.

In high school, Carrie Ezzell Webster was an intern violinist for a year with the Asheville Symphony. She then earned music scholarships to attend the North Carolina School of the Arts in Winston-Salem.

After school, Carrie moved to the South Pacific, where she says she farmed and started listening to jukebox country music in the Australian Outback. She moved back to North Carolina into her grandparents’ house in Cleveland, and she started attending bluegrass picking sessions, becoming completely hooked with the music.

“People are so generous,” Carrie says. “The bluegrass crowd is kind of like sailors. You go into the circle, and they take you under their wing.”

Another Carolina folkworks instructor besides Eric Webster, Carrie Webster and Alex Edwards is Danny Casstevens. He has been giving lessons since 1980 and performing bluegrass since the World Championship Fiddler’s Convention at Union Grove in 1972.

Over the years, Casstevens has played with the Bluegrass Masters Band, Piedmont Bluegass, the Hemrick Family Singers, Bobby Atkins and the Countrymen and the Amazing Bluegrass Sounds. He can play the guitar, mandolin, fiddle, bass, dobro, dulcimer and banjo.

The Websters and Carolina Folkworks plan to hold an open house from 2-6 p.m. Feb. 21 at 1516 S. Main St. They hope the sign they have ordered for the front yard is ready to be installed by then.

Eric Webster promises the day will include food and drink, an opportunity to meet the teachers and jamming sessions of bluegrass musicians on the front porch. 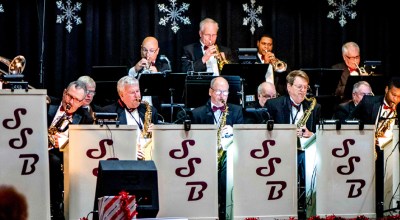 Salisbury Swing Band kicks off festivities for Pops at the Post