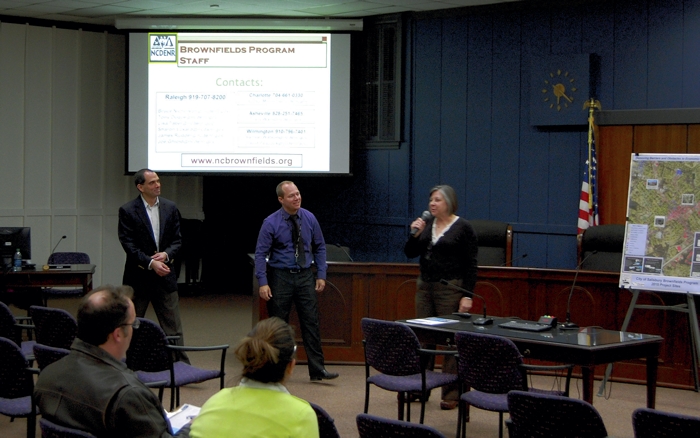 From left to right: Joe Morici with Cardno consulting, Trey Cleaton with the city of Salisbury and Sharon Eckard with the state's Divison of Waste Management, all spoke about the brownfields program during Thursday's meeting.

Residents and city officials heard information about a program to help revitalize old, abandoned and, in some cases, contaminated sites in the city, during a meeting Thursday night at City Hall.

The meeting’s topic was “brownfields,” and the discussion was about how to address and assess them in order to properly redevelop the sites so they become vibrant, valuable parts of the city.

But what are brownfields?

According to the Environmental Protection Agency, brownfields are real property where expansion, redevelopment or reuse may be complicated by the presence or potential presence of a hazardous substance, pollutant, or contaminant.

The old gas station that’s been sitting vacant for years, or the Empire Hotel, or the Kesler Mill, are considered brownfield sites. And the city has received $400,000 in grants to help cover the cost of assessing brownfields in the community.

The city received the grant last fall and, as part of the application process, had already designated four sites as top priorities. But the city has identified over 20 brownfield sites overall.

The four sites are: the Empire Hotel, the Kesler Mill near the Park Avenue neighborhood, the Duncan School on Monroe Street in the West End and the Schaefer Iron Works off North Long Street. The sites are all currently privately owned.

The sites were chosen after several community meetings in 2012 as part of the city’s previous application for the grant. The city didn’t get the grant that time but was awarded the funds after reapplying last year.

The money will be used to assess the four sites to see if, and how much, contamination exists at each. A site doesn’t have to be contaminated to be a considered a brownfield. Part of the process is finding out whether a site is contaminated.

Officials said at the meeting that they’re quite certain the Kesler Mill has some level of contamination.

In the end, the goal is to make the sites attractive for development. In the future, the city can apply for grant money to help with the cost of the actual cleanup.

The city has contracted with a consulting firm, Cardno, to help with site assessments and forming redevelopment plans.

Trey Cleaton, a planner with the city, said the process is about removing the barriers to economic development.

Joe Morici, with Cardno, said the there are two phases when it comes to assessing sites. The first phase involves collecting historical documentation on a site to see if there could be reason for potential contamination. The second phase is actually going in and testing for contamination.

If a site is found to be contaminated, the next step is to figure out how to deal with it. Morici said there are two options. The first is called a clean cap. If the contamination at is site is found to be minimal, simply putting something like a parking lot over the soil could be sufficient. But the method used really depends on what the redevelopment plan is.

If high levels of contamination are found in the soil, it may need to be physically removed and taken to designated sites, depending on the type and level of contamination.

Option two is the more expensive option. But the goal is to make sure the environment is safe and healthy for the public, Morici said.

Cleanup options depend on what the intended use for the site is, he said.

And the process takes time. Morici added: Don’t expect results over night — a lot of community input has to go into the process.

For the city, the next step is assessing the sites before moving forward.

Sharon Eckard, with the state’s Division of Waste Management, spoke about the state’s Brownfields Program. The program’s focus is working with communities and potential developers to make sure brownfield sites are made safe for their intended use and to ensure the protection of the public health and environment.

“Under a brownfields agreement, a prospective developer agrees to perform those actions deemed by the department to be essential to make the property suitable for the proposed reuse,” according to the state’s website on the program.

In return for the agreement, the developer gets a state-backed plan to take to a bank or lending institution when looking for financing for the redevelopment. And, the state will only hold the developer liable for what’s laid out in the agreement.

Also, as part of the program, developers can qualify for tax incentives, Eckard said. If an agreement is reached, the new property owner could receive five years of partial county tax exclusion on the redeveloped and reappraised site.

The first year, the land owner would pay 10 percent of the actual tax. After that, the increments go to 30, 50, 75 and 90 percent. The full tax would have to be paid in the sixth year.

It’s a win-win for everyone involved, Eckard said.

She said it’s important that any potential developers find out if their plan qualifies for the program before actually purchasing a brownfield site. And the developer cannot be the entity that caused the contamination on the property.

Mayor Paul Woodson and Mayor Pro Tem Maggie Blackwell were at the meeting.

Woodson said, “We think this is vital to the future of the city,” about redeveloping the sites.

Cleaton said it will be important for the community to be involved going forward, and that if anyone has any questions they can contact him at the city’s One Stop Shop.