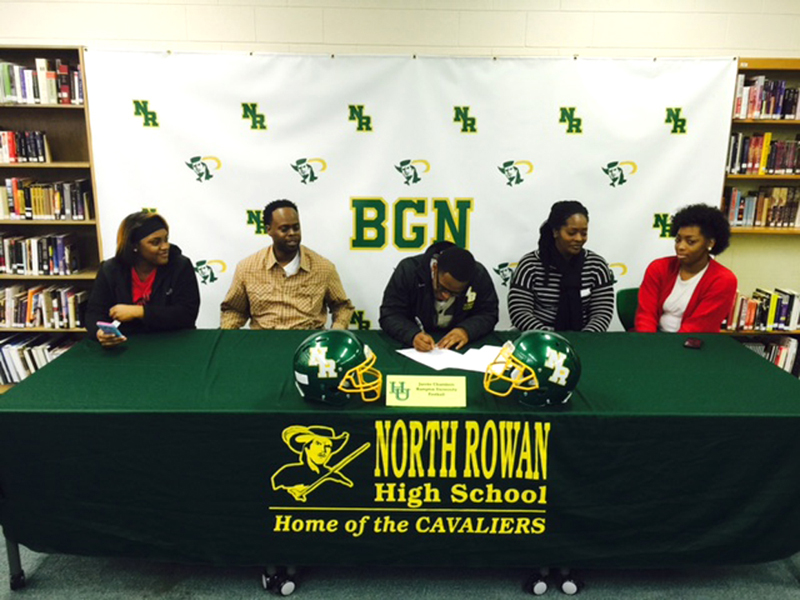 Submitted photo North Rowan running back JaReke Chambers on Friday with family at a celebration of his signing a National Letter of Intent to play football at Hampton University.

SPENCER — The National Letter of Intent was sent to Hampton on Wednesday. So, Friday’s gathering in the library for North Rowan running back JaReke Chambers was a celebration of the player’s career instead of a ceremony.

“We’re really proud of JaReke,” head coach Joe Nixon said. “He’s meant a lot to the community and to the high school. He is an all-time [school] record holder, which speaks a lot because there have been a lot of good tailbacks [at North Rowan].”

Chambers holds the school records for career rushing yards with 4,769 and career total touchdowns with 71. He represented North Carolina in the Shrine Bowl in December 2014.

What Chambers remembers about his on-field accomplishments is a game-winning play from the 2013 season.

An injury to quarterback Alexis Archie pressed Chambers into the starting quarterback role at Statesville. It was a tight game. Chambers, however, led the Cavaliers on a game-winning drive as the seconds ticked off the clock. He ran the ball into the end zone for the winning score with 7.3 seconds left on the clock.

He made enough plays on the field to get North Rowan principal Fateama Fortner to log on to Hudl to check out his highlight reel.

“That was the first time I ever watched Hudl, and I’m like, ‘Dang. He is killing them,'” she said. “We’re so proud of you. Go up there and do big things and know you are representing North Rowan in a big way.”

Accomplishments on the field aside, Chambers summed up his career at North Rowan without mentioning what took place under the lights and in front of packed stadiums.

“My four years here, I had everybody pushing for me,” Chambers said. “Everybody telling me, ‘JaReke stay on your books. Always stay focused because you have a good future ahead of you.’ I thank everybody for that. That felt really good.”

For the Pirates, Chambers will do what he did at North Rowan. He said he’ll play running back and mix it up a little at receiver.

Chambers visited Hampton, a historical black university on the waters of the Hampton River, in January. He met a few players and bonded with the team. He liked the campus.

The other advantage: Getting out of The Tar Heel State.

Chambers drew interest from N.C. Central and North Carolina A&T — also members of the MEAC. But the lure of striking out on a journey appealed to the young man.

“I really did want to get out of state, just get away from home a little bit,” he said. “Go explore and meet new people. So, that was the choice.”