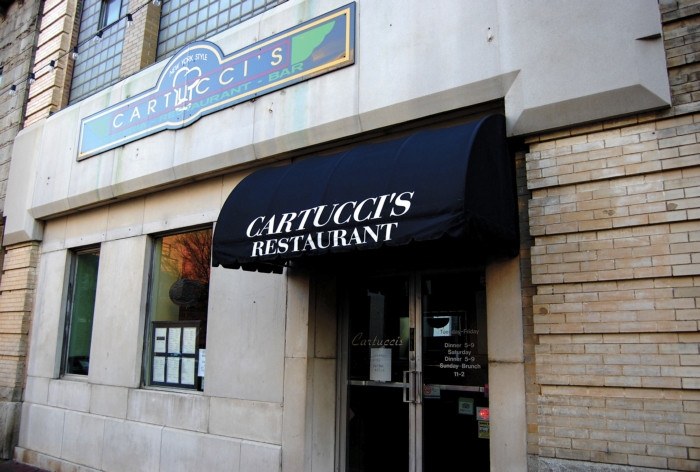 The owner of Cartucci's, Ted Aurora, said he has decided to try to sell the restaurant, which has been closed since early January.

The owner of a downtown restaurant that’s been closed for about a month said he is now trying to sell it.

Ted Aurora, who owns Cartucci’s Italian Restaurant on Fisher Street, said Wednesday he does not want to run the business any longer.

“My heart’s not in it anymore,” he said.

Aurora said he is hoping to move to Florida to reunite with his family and that he hopes a buyer will come along who will continue operating the restaurant as Cartucci’s.

The restaurant closed in early January, and Aurora said then the reason for closing was that his chef took another job and he needed to find a replacement.

On Jan. 21, Aurora told the Post he was unsure about the future of Cartucci’s, but that he hadn’t made a final decision yet.

A fire in July 2013 caused the restaurant to be closed until last summer.

Aurora also owned The Grapevine, a wine bar just around the corner on South Main Street,  but sold it shortly after Cartucci’s closed.

Replacing The Grapevine will be Jack Rabbit Slim — it will serve craft beer and host live music. The venue is operated by Tim Kostas and his son Alec. They live in Kannapolis and are in a band also called Jack Rabbit Slim. As of now, they plan to have the grand opening on Feb. 21.

Aurora said anyone interested in buying the restaurant can reach him at 704-239-5864 for more information.