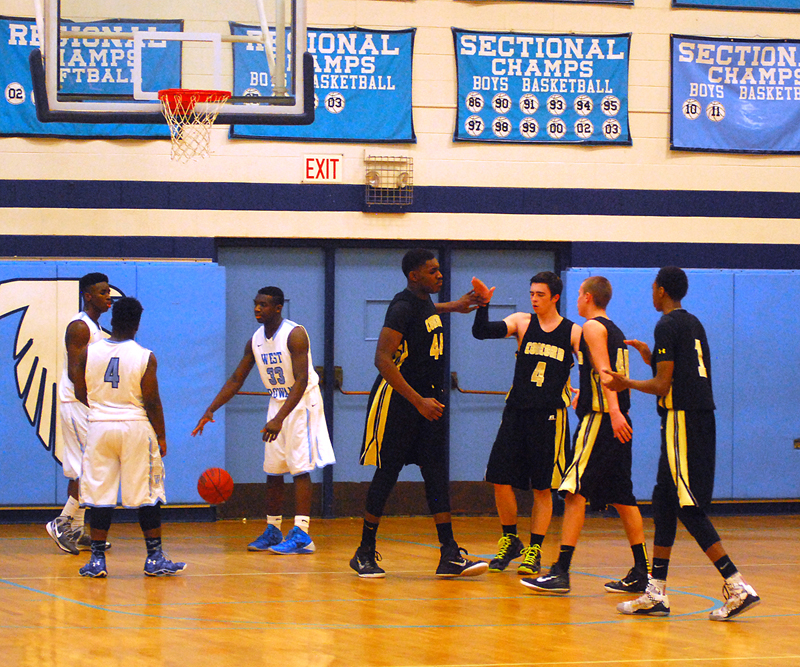 Photo by Adam Houston Concord's Malik Ford (44) and Ray Kowalski (4) high five after Ford drew a foul in the first half at West Rowan. The Spider defeated the Falcons 88-64 on Friday in a South Piedmont Conference game in Mount Ulla.

MOUNT ULLA — West Rowan shot close to 50 percent from the floor, buried 10 3-pointers and still got its eggs scrambled Friday. That’s because visiting Concord’s offense rattled and burned with efficiency in an 88-64 South Piedmont Conference victory.

“They played very well,” coach Mike Gurley said after West Rowan (13-9, 9-5 SPC) had its modest two-game winning streak snapped. “They made 13 threes, they were just a little quicker, their timing was better than ours, their communication, their execution were all better. That’s my fault. I’ve got to get my team ready to play.”

Concord (16-7, 11-4 SPC) locked up third place in the league standings with a shooting display that surprised everyone. Right from the start the Spiders were connecting from long distance, sparked by 6-foot-4 freshman Rechon Black— who made three of Concord’s five long balls in the opening quarter.

“The shooting came out of nowhere,” said Concord coach George Walker. “It surprised even me. We’re not really that kind of team. It made me happy, but it shocked me a little bit.”

Black, who netted a game-high 23 points, hit a three from the right side that gave Concord a 23-9 lead with 1:45 remaining in the opening period. It capped an early 13-3 run the put the Spiders in control.

“I thought we were ready to play,” Gurley said. “As a coach you prepare your team in practice, you set down the guidelines for what you’re looking for. We had five keys to win this game, and Concord buzzed through all five of them in the first quarter.”

West Rowan wanted to take care of the ball, get back on defense, play a strong man-to-man, hold Concord to one shot and attack together.

“I guess we did OK offensively, attacking as a team,” Gurley said. “But if you don’t do the first four, you’re in trouble. We gave them too man easy baskets, too many second shots.”

The Falcons trailed 47-32 at halftime and by as much as 81-51 when Concord reserve Cole Johnson drained a 3-pointer with 3:25 to play.

West Rowan received 15 points from Kortez Weeks and placed three other scorers in double figures. But it spent much of the night failing to penetrate Concord’s 2-3 zone defense, anchored by 6-8, 270-pound space-eater Malik Ford.

“I’m not a good zone coach at all, but we’ve been working on it,” Walker said. “Our team likes to play it and they’re getting good at it. We’ve got size and length, and Malik — he eats up the whole lane.”

Those looking for a bright spot from the West Rowan found it when 6-8 senior Tomas Valle entered the game in the fourth quarter. He quickly blocked a shot, pulled down an offensive rebound and was seen wrestling on the floor for a loose ball.

“I know I’ve got to be more aggressive and get back on defense,” Valle said after scoring four last-minute points. “But just coming in like that, against their big guy, I knew I had to stand my ground. It motivated me to play better.”

Gurley was quick to praise Valle’s effort outside his second-story office.

“Tomas brought his energy in the fourth quarter,” Gurley said. “It wasn’t just fun. Usually when he comes in everyone thinks it’s a novelty. Tonight he wasn’t a novelty. He was a basketball player.”