Students’ ethical thinking will be the focus of college competition 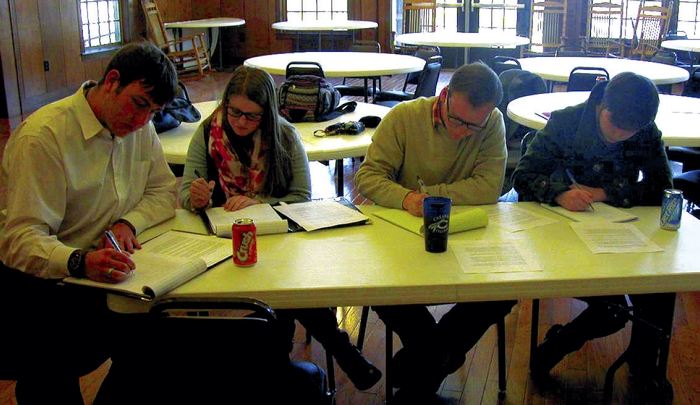 Six Catawba College students are poised to represent the college in the fourth annual North Carolina Independent Colleges and Universities’ Ethics Bowl, which will be held Feb. 6 and 7 at the Campbell University School of Law in Raleigh.

Catawba’s chaplain and senior vice-president, the Rev. Dr. Ken Clapp, who also teaches classes on business ethics, worked with North Carolina Independent Colleges and Universities and Dr. Jesse McCartney, a former Catawba provost and coordinator of the statewide program  for North Carolina Independent Colleges and Universities, to put things in place for Catawba to send a team to the event.

He then asked Dr. Charlie McAllister and Dr. Norris Feeney, members respectively of the history and politics faculty at Catawba, to prep Catawba’s team. Feeney will accompany the students to Raleigh for the competition.

“I have taken teams of students to ethics symposiums for several years and have observed how helpful it is for them to have the opportunity to debate with peers from other institutions,” Clapp said. “It really opens their minds to the importance of addressing issues with a concern for what is right as opposed to just what may be expedient or serve special interests. The real dilemma often is in deciding what is ‘right.’  These debates help the students develop critical thinking skills which will serve them well throughout their lives and often inspire a new desire to work for the good.”

Critical thinking for the real world — specifically, ethics in education — will be the focus of the fourth annual North Carolina Independent Colleges and Universities Ethics Bowl. More than 100 college students from 20 of the state’s independent colleges and universities will participate in this year’s competition.

“Students need to understand that corporate America values ethical behavior and appreciates the dilemmas that are often in the day-to-day actions that we take,” says Anne Lloyd, executive vice president and chief financial officer at the Raleigh-based Martin Marietta, one of nearly 20 corporate sponsors of the event.

While actual cases of fraud are rare at Martin Marietta, which employs 7,000 people, the company in the past has terminated senior-level and long-tenured employees for violations of ethical and business conduct, Lloyd says, and employers everywhere should be vigilant in helping their employees avoid improper behavior.

Dr. Hope Williams, president of NCICU, notes her organization created the Ethics Bowl to underscore the indispensable role that ethical thinking and actions play in daily life, and to give students an opportunity to develop the skills to recognize and analyze ethical issues quickly and work in teams to resolve them.

Business, government and foundation leaders serve as judges and moderators at the Ethics Bowl, which pits student teams against one another through four rounds of debate on ethical questions, including those the students have researched in advance, as well as a surprise question. Following the fourth round for all teams on Saturday, the most successful teams compete in two semi-final rounds, held concurrently, followed by a final round.

“It’s really teaching college students how to identify ethical issues, how to analyze them,” says Holly Wenger, director of ethics and compliance at Duke Energy and a judge in the final round of last year’s Ethics Bowl. “Those are the kind of people that Duke Energy wants.”

Corporations recognize that ethical issues represent a “gray area” in the business world and pose the challenge of “taking divergent views and coming to the right course of action for your company, your shareholders and all other stakeholders,” Lloyd comments.

In addition to the team competition, students participating in the Ethics Bowl will have the opportunity – during the competition and at a reception and dinner at the N.C. Museum of History – to meet corporate, foundation and government leaders from across the state who serve as judges and moderators for the competition.

“In today’s competitive global economy, organizations place a significant value on employees who can see and resolve the ethical questions they face in the workplace every day,” concludes Williams. “The Ethics Bowl reflects the broad effort by North Carolina’s independent colleges and universities to prepare students to think and act critically and responsibly.”

The horrible awful thing that is wrong with schools