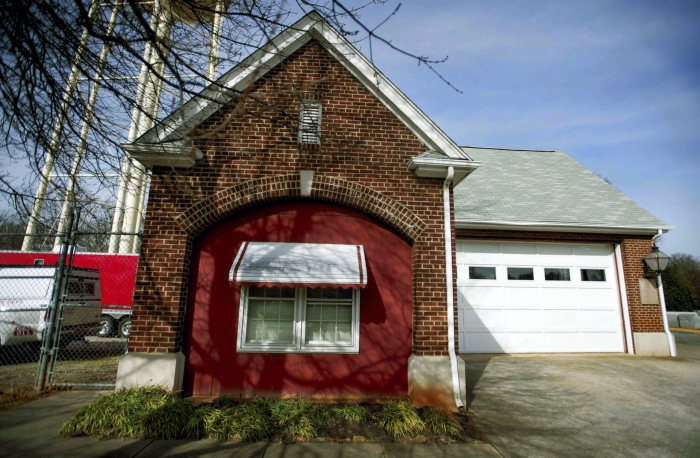 The last time a fire call was made from the nondescript fire station on South Main Street was in 1980. But, given a few more renovations and a few more months, Salisbury firefighters will roll out of the station. The station is located beside Chestnut Hill Cemetery.

Firefighters have spent months cleaning, stripping paint and wallpaper and unearthing the original treasures of the station that were covered over the years. The goal is to use the building as a working fire station and training facility.

“It’s a great place for us to gather multiple stations together in the center of the city rather than send someone out to the corners of our community,” said Salisbury Fire Chief Bob Parnell.

In 2002, following Sept. 11, when firefighters rebuilt and rededicated the Salisbury-Rowan Firefighter’s Memorial next door, Parnell said since that time they’d felt “this is really sacred ground.”

The building now houses two offices — one for Capt. Rodney Misenheimer, who handles the department’s logistics, communication and computer systems, and the other for Capt. Tyler Forrest, who is the fire department’s training officer.

Misenheimer has taken a great interest in the renovation and has overseen much of the rehabilitation, Parnell said.

The building was erected on April 6, 1942, but closed in 1980. Since that time, it has been used as storage for various city departments.

The firefighters’ memorial next door was built at the same time, which made it the perfect spot to bring back a working station, Parnell said.

The very first city fire station was located in the 100 block of South Lee Street, currently housed next to Firehouse Lofts at the corner of South Lee and East Fisher streets.

There were a few hidden treasures found in the building, including transom windows over all of the interior windows, a coal shoot in the basement, a layer of textured wallpaper that had to be scraped and the wall sanded down afterward.

There was a business card with the name Dewey Peck, a former city employee, with the date 1989 written on the back found in a transom window.

Misenheimer said he also found a 1960 penny on a window ledge that he’s left just where he found it. He hypothesized the penny was left around the time the city closed off some of the building for office space.

Also, in the basement, is a miniature carousel that Parnell said was likely housed in a park, but the machinery had to be dismantled and was later reassembled by firefighters.

He said in order to remove it from the basement it has to be disassembled again.

The No. 5 station is conveniently located, Parnell said, giving access to Klumac Road once it opens up in 2016 following railroad renovations, also the Fulton Heights, Chestnut Hill and South Main Street neighborhoods.

He said the fire department plans to be good neighbors with the surrounding communities.

As funds allow, the fire department will continue work outside to make it more appealing to the community with landscaping and work to the exterior of the building, Misenheimer said.

One of the issues with using a 72-year-old building is that none of the current fire trucks fit inside the bay doors, which are not high enough. The bay doors are roughly 24-feet-by-70-feet.

The bay will house a 1961 LaFrance Aerial fire truck that is in the process of its own renovation, Parnell said.

He said Ellis Cross Roads Fire Chief Jeff Whitley has been rebuilding the truck’s engine, transmission and electrical system — in his spare time.

The renovations aren’t complete, Parnell said, as the fire department still needs to upgrade the building with sprinklers and other plumbing improvements to the bathrooms.

Parnell said the department applied for a grant to fund the sprinklers last year, but did not receive it. They will apply again this year.

“It’s future is pretty bright,” Parnell said of the building.