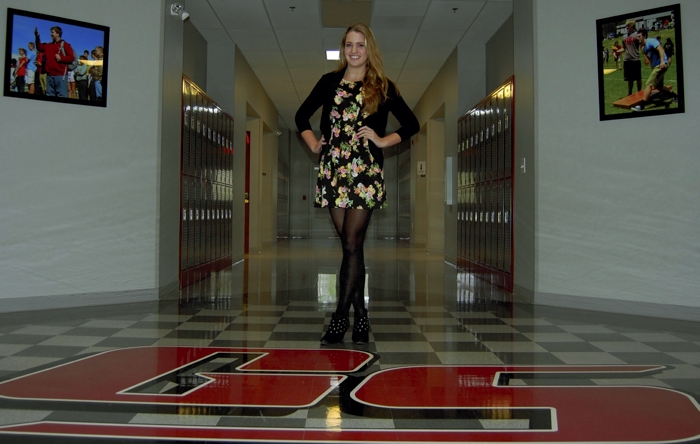 When Lydia Hartung isn’t attending classes, hanging out with friends or playing sports, you might find her on the runway.

She initially worked with an agency, but after her contract expired, she began taking freelance jobs.

“They like that I’m so tall at such a young age,” she said.

She’s done a number of photo shoots and fashion shows, but her favorite type of assignment is high fashion.

“I just love doing them. It’s something interesting and unique I can do,” Hartung said.

Modeling opportunities fluctuate based on the season.

“Right now it’s kind of a low season,” she said, adding that she’s preparing for the designer lines to come out with their spring collections.

Hartung’s also planning ahead for her senior project, a graduation requirement at Gray Stone. She’s combined her love of modeling with her love of animals.

“My mom and I love animals,” Hartung said. “We can’t go in a pet store without adopting an animal.”

So, she’s planning a fashion show to benefit Kitty City, a shelter that saves animals from kill shelters in Concord. Hartung’s approaching local boutiques and enlisting the help of local friends and models for the event.

She’s also a member of Gray Stone’s tennis and swimming teams. She’s been playing tennis since she was in seventh grade at Erwin Middle School.

It started out as a primarily social decision, Hartung said, but she quickly found that she was a good swimmer.

“I’m more of a speed swimmer than a distance swimmer,” she added.

Hartung combines tennis and swimming with healthy eating to stay in shape for modeling.

“Pressures to stay fit are big in the modeling industry,” she said.

Hartung is from Rockwell. She attended Rockwell and Shive elementary schools and Erwin Middle. When she reached ninth grade, she decided to attend Gray Stone Day School, a charter school located on the campus of Pfeiffer University in Misenheimer.

“I decided to come to Gray Stone because I had heard a lot of great things about it,” Hartung said.

When she was in eighth grade, she attended a shadow day, where she followed a ninth-grader around for a day, and she was hooked.