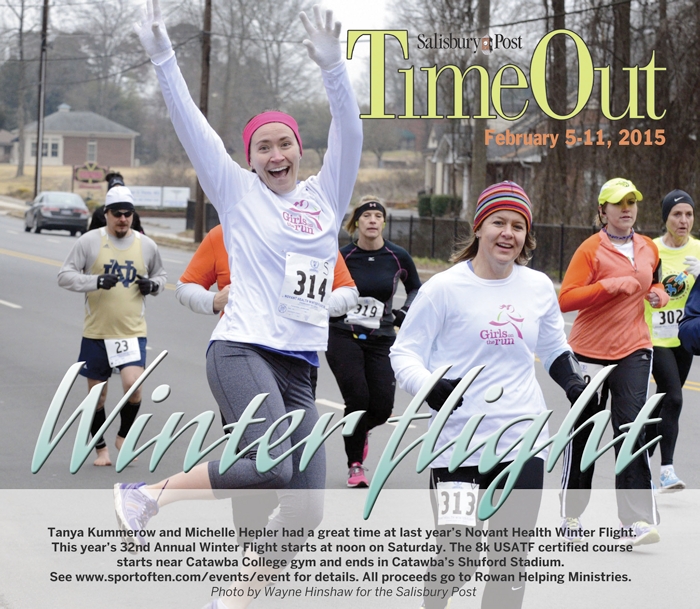 Jazz Vespers will take place Saturday evening at 7 p.m. in the chapel of St. John’s Lutheran Church, 200 W. Innes St. Themed “When the Saints Go Marching In,” this “hour of worshipful music” will feature musicians Diana Tuffin and the Joe Robinson Band.

The event is free and the public is invited. The Rev. Rhodes Woolly is senior pastor of St. John’s, and Rob Durocher is minister of music.

CONCORD — “Proposals” by Neil Simon, rated PG, is the story of romantic entanglements in the summer of 1953. Burt, mid-50s and convalescing from a second heart attack, anticipates the arrival of the ex-wife he still loves. Daughter Josie has just broken her engagement to a Harvard law student and pines for his buddy Ray, an aspiring writer with whom she once had a brief fling. Clemma, the black housekeeper at the center of the action casts a astute eye on the complications while facing with her own unresolved past.

The fourth annual Earth Day Jam will be held April 17-19. Earth Jam is a music and arts festival directly benefitting LandTrust for Central North Carolina and raises money to fund environmental projects in the community.

A musical lineup of 20+ top regional performing artists is planned as well as fun activities, games for kids and the whole family, food from local farms, beverages from local breweries and vineyards. It will be held at Dark Before Dawn Farm in Salisbury.

Becky Foster is stuck in a mid-life rut, but when an opportunity presents itself, she puts the pedal to the metal and takes the audience along for the ride of a lifetime.

All performances will be in the Lee Street Theater & Performing Arts Center at the Tom & Martha Smith Event Center. 329 N. Lee St.

The winning artists works were selected from 104 entries by juror Keith Bryan, art instructor at UNC Charlotte in the Art and Art History Department.

Call to participate in the 19th annual multicultural festival

Lexington — Lexington’s Recreation and Parks Department will host the 19th Annual Multicultural Festival on May 2 at Finch Park, rain or shine. Vendors in food, art, crafts and merchandise are invited to participate, as well as live entertainment.

The Multicultural Festival is a one-day event that celebrates diverse cultures, starting with the Parade of Nations and featuring five International villages: African American, Asian, European, Latino, and Native American, plus Children’s International Village with free amusements. New this year the Music Emporium will be making percussion instruments around the World from reuse materials.

Using music of George Gershwin, Duke Ellington and Cole Porter, Paul Murphy’s performance on Feb. 19 will be framed with conversation as he develops parallels between jazz, spirituals and popular music as he plays the piano and saxophone. His program emphasizes the power of music, especially the juxtaposition of joy and pain. Paul’s daughter Anna, an accomplished vocalist on her own, will enrich the program with Caribbean vocals.

Paul graduated from UNC Chapel Hill in 1991 with a B.A. in music composition and theory. He has a master of divinity from Duke Divinity School and has a doctor of ministry from Hood Theological Seminary.

He has been a professional musician since 1983 and has performed alongside Carl Anderson, George Winston, and Lou Rawls. He studied with Roger Hannay, Stephen Jaffe, T.J. Anderson, Scott Lindroth and with Pulitzer Prize-winning composers Ellen Taft Zwilich and Louis Andriessen. He was coached by Tony Bennett.

He is a veteran of the US Army and served as a paratrooper with the 82nd Airborne. He currently lives in Southern Pines with his family.

The presentation, hosted by The English Speaking Union Salisbury Branch, will be at 6:30 p.m. at the Country Club of Salisbury. Reservations for the Thursday, Feb. 19 dinner and show, open to all, are $32 each. RSVP to Toni Iossi at 704-212-2114.

The tour kicks off March 10 in Charlotte. Tickets are available at http://sethandjessicasing.com

Both Avett and Mayfield are ardent fans of Smith and his music, and with Mayfield in the opening slot of previous Avett Brothers concert dates, the two have performed Smith songs live together before. For this upcoming tour, the duo will be joined by bassist Paul Defiglia (The Avett Brothers).

POWs of the North Vietnamese to speak

RALEIGH — Three men who survived years of terror as prisoners of the North Vietnamese Communist government will share their stories during a symposium presented by N.C. Vietnam Veterans Inc.

As a captain piloting a B737 on May 10, 1982, she also became the first female captain in the United States to pilot a commercial jet. The Feb. 21 event will also feature a restoration tour of the Piedmont DC-3, the Potomac Pacemaker, led by retired Piedmont and US Airways Capt. Bill Wilkerson.

It was in 1934 that the first woman in the United States, Helen Richie, received her commercial pilot’s license, flying with Central Airlines. Despite that accomplishment, through the 1960s and into the 1970s, commercial aviation in general, including Winston-Salem based Piedmont Airlines, kept the cockpit as a “boy’s only” club. Cheryl Peters, however, broke through that barrier.

Peters’ first foray into commercial aviation was more traditional. She worked as a flight stewardess through the 1960s, but began flight training when a strike left her and her coworkers grounded. After nine years of training and accruing flight time, Peters began seeking a job as a commercial pilot. In June of 1974, at the age of 29, Peters’ was hired by Piedmont Airlines.

In Richard Eller’s “Piedmont Airlines: A Complete History 1948-1989,” Peters described her experience with other pilots as “professional.” But it helped that she was good at her job. “The only thing that really broke down any barriers at all was that they realized that I could fly the airplane and do the job. Then I was just another pilot to them,” she said.

Capt. Cheryl Peters, now a resident of Atlanta, will appear in the Bob Julian Roundhouse at the N.C. Transportation Museum at 1 p.m., Saturday, Feb. 21, to give the complete story of her journey into the “wild blue yonder.”

Following Peters’ presentation, Capt. Bill Wilkerson, retired pilot for Piedmont Airlines and US Airways, who will give a restoration tour of the Piedmont DC-3. Currently undergoing cosmetic restoration in the museum’s Back Shop, visitors can find out what is next for this historic aircraft.

Regular admission is required for Piedmont Airlines Day. Admission is $6 for adults, $5 for seniors and active military, and $4 for children 3-12, plus state sales tax. Children 2 and under are free. Train and turntable rides require an additional fee.

Visit www.nctrans.org for tickets and information.

COLUMBIA, S.C. — The South Carolina Film Institute is seeking college students to work in and guest star in the new movie “Proverbs.” This internship is an opportunity to expose college students and aspiring filmmakers to the Hollywood/New York Independent way of making movies and tv shows.

“Proverbs” is inspired by the true story of Christopher Pittman, the 11-year-old sentenced to 30 years in prison. The entire film will be shot in South Carolina.

Paid stipends upon completion. Apply by Feb. 25 to www.scfilm.tv/interns.html

A great time to be a history buff: Civil War sesquicentennial programs

The exhibit will include flags, images of the prison and individuals associated with it, quotes from private and period sources, and handmade models of prison structures based on 1886 Kraus lithograph.

One display will feature the trial of Salisbury Prison Commandant Maj. John H. Gee in 1866 in which he was found innocent of war crimes.

Also, in the Hurley Room an expert on ladies period clothing will be sharing information and showing apparel.

On the lawn in front of the auditorium reenactors with the 28th NCT will be in Union and Confederate uniforms.

The nonprofit Salisbury Confederate Prison Association Inc. is dedicated to preserving the history of the Prison. For additional information contact Sue Curtis, SCPA president, at 704-637-6411 or southpaws@fibrant.com

The Bond School House Affair occurred on the morning of February 12, 1863, when the Yadkin County militia tried to arrest Union sympathizers hiding inside the log school house and conscript them into the Confederate Army. Gunfire followed and four men were killed, two on each side. The affair revealed deep divisions over the Civil War in Yadkin County.

The purpose of the program is to reveal more biographical information about the participants, which included about 18 men of the militia and about 15 men inside the school house. The event is free and open to the public. For more information, contact Andrew Mackie at 336-428-8471 or andrewmackie@yadtel.net

Wilmington — One of the lesser-known, yet very important Civil War battles was the Battle of Forks Road, a skirmish that preceded the fall of Wilmington during the Civil War. The Cameron Art Museum will present its 10th Annual Civil War Living History Weekend on Feb. 7 and 8 to commemorate the 150th anniversary of Battle of Forks Road. This year’s theme “Forks Road … The Beginning of the End” highlights this significant battle which is re-enacted on both days by uniformed Union, U. S. Colored Troop (U.S.C.T.) and Confederate re-enactors.