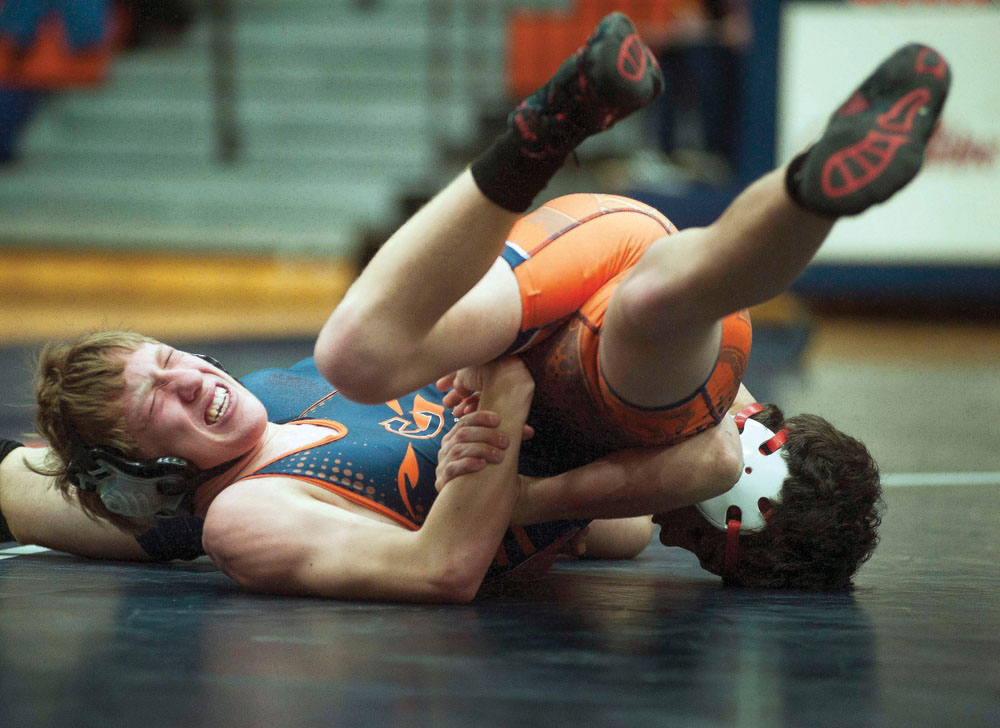 JON C. LAKEY / SALISBURY POST Carson's J.P. Barringer (left) struggles in loss in match with Piedmont High School's Michael Fritz in the 126 weight class of the opening round of the 2015 NC state 3A Dual Team Wrestling meet on Tuesday evening.

CHINA GROVE — Carson may be on the road to Good Enough, but it wasn’t good enough Tuesday.

The Cougars’ dual-meet season ended with a 39-33 loss to powerhouse Piedmont in the first round of the 3A state playoffs.

“Our program made a lot of big strides this year,” coach Bryce Vandenburg said. “We wrestled some good programs. We just got beat by one of the top ones.”

“We’ve come a long way,” senior Brandon Sloop said. “When I was a freshman we had only six kids. We’d go into a dual meet knowing we couldn’t win, even if everyone pinned. This year was definitely a huge step forward from that.”

Sloop was one of three Carson wrestlers who recorded pins against fifth-ranked Piedmont. But the Cougars (11-7) forfeited three weight classes — 113 pounds, 120 pounds, 152 pounds — and lost another it fully expected to win.

“I didn’t think we wrestled very well at 160,” Vandenburg said, referencing a 10-8 overtime loss by junior Jaron McMasters. “I think he panicked a little and looked a little tight.”

It was a pivotal match. Carson trailed 33-15 and was looking for a fall when McMasters faced Piedmont’s Mathis Strickland. Instead McMasters squandered an 8-5 lead late in the third period when he was called for a hand-clasp and then taken down. Strickland notched another takedown less than a minute into overtime.

“I don’t know what happened,” said McMasters (33-7). “One minute I’m ahead and in control. The next minute it was over. There was some late call about fleeing the mat.”

That wasn’t confirmed by the referee, who indicated he awarded points only for the hand-clasp and takedown late in regulation. Winning coach Jamie Belk felt it was a turning point.

“Winning that match made us feel very, very good,” he said. “We liked our chances.”

With Carson facing elimination, Sloop leveled Piedmont’s Garrett Hinson at 170 for his 33rd win of the season.

“Wrestling’s an individual sport and a team sport,” Sloop said. “But as an individual you’ve got to go out and help your team. And that’s all I did. I took him down and kept working his shoulder. Eventually he lifted it up and I put him down.”

“We’re a good team, good enough to make it here,” McMasters said. “I just wish we could have done more.”