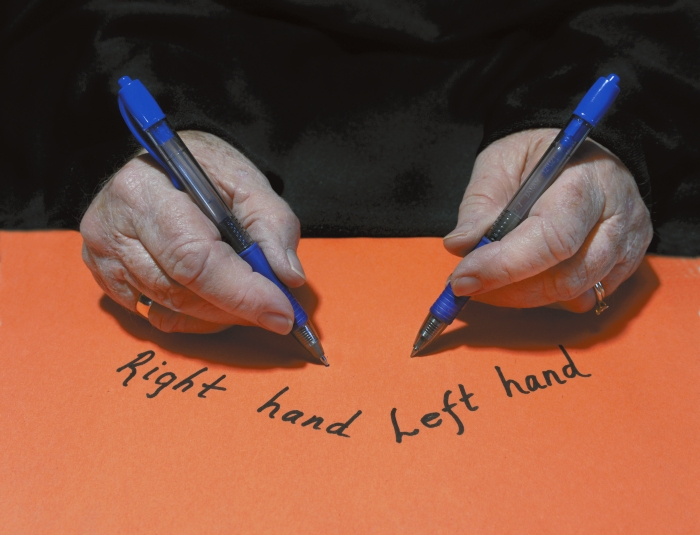 Are you a lefty or a righty? Only about 10 % of the people write with their left hands. Lefies have all sorts of problems adapting to the right handed world and tools. photo by Wayne Hinshaw for the Salisbury Post

I ran across an article listing facts about lefties. I don’t know that I agree with all the so-called facts, but I found them interesting. Only about 10 percent of the population in the U.S. is left-handed. If you are a lefty, you will enjoy this, and if your are a righty, look upon lefties with understanding.

“Left-handed people may have a higher risk of brain disorder” according to Brainjet Daily Cerebral Stream, whatever that is. They say that all people use the left hemisphere of the brain for language. Thirty percent of the lefties use the right hemisphere instead. Lefties might have more schizophrenia and dyslexia. Lefties may be more artistically inclined and are drawn into careers in art and music. I’ll add photography to the list.

In the United Kingdom, a group started “Left-Handers Day” in the 1990s for making people aware of problems that lefties have.

A survey of 25,000 people showed that lefties drink more than righties, but may have more fun because of the drinking. The survey says, “more drinking,” but does not mean more drunkenness. Lefties might get angry quicker as their brains try to figure out the left-right processing for their moods. With the lefties drinking more and getting angry, we might have a problem.

The lefties “rule the roost” on smartness. St. Lawrence University used IQ tests to determine that more lefties have and IQ 140 than righties. One study shows college-educated lefties to be 15 percent to 26 percent richer than righties. The boat had sailed before I got a high IQ or wealth.

Lefties always get a bad reputation historically. Witches used their left hands for casting spells and putting curses on people. The devil might be left-handed, the survey states. Lefties are rebellious. Famous serial killers were lefties, such as The Boston Strangler, Jack the Ripper, and Osama Bin Laden. They might also be devils in that case. Christian churches baptize with the right hand, while devil depictions show the devil to use his left. I speculate that the paintings and drawings showing the devil are shown as lefties only to show them to be opposed to the righties in Christian drawings and religious practices. It could be the good versus bad idea in drawings with righties being good and lefties being bad.

Some theories say that when young babies are placed on their stomachs, they will turn their head right or left in the direction predicting them to be lefties or righties. I don’t know if there are any scientific studies to support this observation or not.

Marriage expert Sheri Stritof explains that wedding grooms stand on the right side of their brides. The story is that years ago, men who were prone to fighting with swords had to protect their brides on their left side while fighting with their right hand. The worry was that brides might be kidnapped during the wedding, so the groom had to be prepared.

While I am calling names, there have been eight presidents who used the left hand for writing: James A. Garfield, Herbert Hoover, Harry Truman, Gerald Ford, Ronald Reagan, George H.W. Bush, Bill Clinton and Barack Obama. Interestingly, in 1992 all three presidential candidates were lefties: Bush, Clinton and Ross Perot.

Too much useless information means it is time to move on. I will write about a lefty using a right-handed camera on another day.