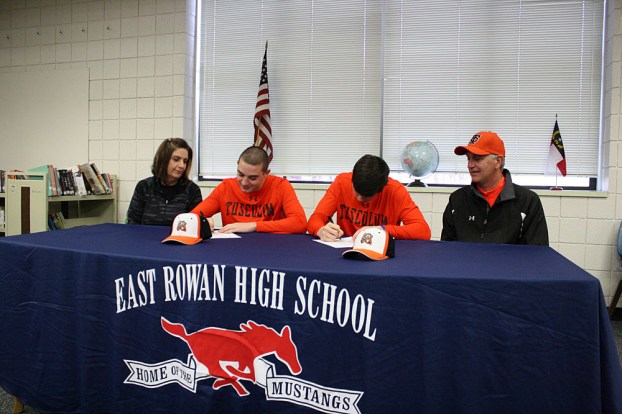 GRANITE QUARRY — They spent their earliest days sleeping in the same crib, and East Rowan’s Wyrick twins, Samuel and Seth, will stick together another four years.
Strong-armed Samuel (6-1, 185) no doubt tossed the pacifiers and rattles, and sure-handed Seth (6-0, 182) caught them.  Now the Mustangs’ record-breaking aerial combination is headed to Tusculum College in Greeneville, Tennessee, as a potentially productive package deal.
Staying together has its advantages. Tusculum is 185 miles away, in the foothills of the Great Smoky Mountains, but family can see both of them play at the same time and place.
Other advantages are more subtle.
“They’ve already got an instant buddy, an instant film-watching partner and an instant study partner,” East Rowan coach Kenneth McClamrock said. “That’s going to help them be successful, and they’re going to a school that fits their skill set well.”
Division II Tusculum competes in the South Atlantic Conference with schools such as Lenoir-Rhyne, Carson-Newman, Wingate, and, of course, Catawba, in the Wyricks’ hometown.
When McClamrock informed the Wyricks that Tusculum called and wanted to set up an official visit, the fraternal twins were mostly puzzled.
“I had no clue who Tusculum was — except I knew Catawba played them,” Samuel said.
The Wyricks’ visit to Tusculum, and its big-time facilities, in mid-January was eye opening.
“Beautiful mountains, beautiful scenery,” Seth said. “The town of Greeneville is a lot like here, the coaching staff treated us great, and it’s a great fit for us as far as their offense. They throw it. They’re wide open.”
Wide open accurately describes the Pioneers, who are known for quarterbacks and receivers. Tusculum QB Bo Cordell broke records not long ago. Maybe Samuel will be his successor.
“It was an amazing visit,” Samuel said. “It’s really the only visit we took, but it was the only one we needed.”
The Wyricks, three-sport athletes who are important players for East Rowan in baseball and basketball, were stellar football players as sophomores and juniors. They exploded as seniors.
Samuel’s 3,301 passing yards were the most ever compiled in the county in a single season. On Rowan County’s career list, he ranks first in touchdown passes (74) and second in passing yards (6,525).
Belmont South Point was the best team East Rowan played, and Wyrick, the Rowan County Offensive Player of the Year, had a county-record 36 completions in that third-round 3A playoff loss. His 389 passing yards that night gave him the second-biggest game in county history.
Samuel, who had five TD passes in three different games, is also mobile. He rushed for more than 1,000 yards in his career and 22 touchdowns.
Seth’s stats were equally impressive. He broke the Rowan County records for career receptions (189) and career receiving yards (2,948). As a senior, the Shrine Bowler broke the single-season marks for receptions (102) and receiving yards (1,622).
He had 35 career TD catches, and his 264-yard game against Morganton Freedom in the opening round of the playoffs was the biggest receiving game in county history.
“They left  a legacy,” McClamrock said. “They’ve given us a foundation for our future.”
Looking at the SAC schedule, the Wyricks are most excited about 2016 and 2018. Those two seasons Tusculum will play at Lenoir-Rhyne, Wingate and Catawba, the three schools closest to home.
The twins were recruited by Justin Zimmerman, the receivers coach responsible for North Carolina recruiting.
“Through their hard work on the field and in the classroom they’ve created for themselves a great opportunity,” Zimmerman said. “It’s been an honor to build a relationship with the Wyricks and we look forward to growing that relationship.”
There was a black and orange “TC” cake at the signing party, gallons of orange soda and  a chorus of “Pioneer Up!” cheers.
The Wyricks sent their signed National Letters of Intent to Tusculum early Wednesday morning., so their mother, East Rowan P.E. teacher Laurie Wyrick, had to find something for them to write on at their 9:30 a.m. party.
She created a contract for her boys that read: “I’ll come home often, I’ll call home often, and I’ll never forget where I came from.”
Together, the Wyricks signed that contract and moved on to the next chapter in their lives.
You Might Like

Catawba didn’t lose much after a 2014 season in which it finished one game over. 500 overall and one game... read more