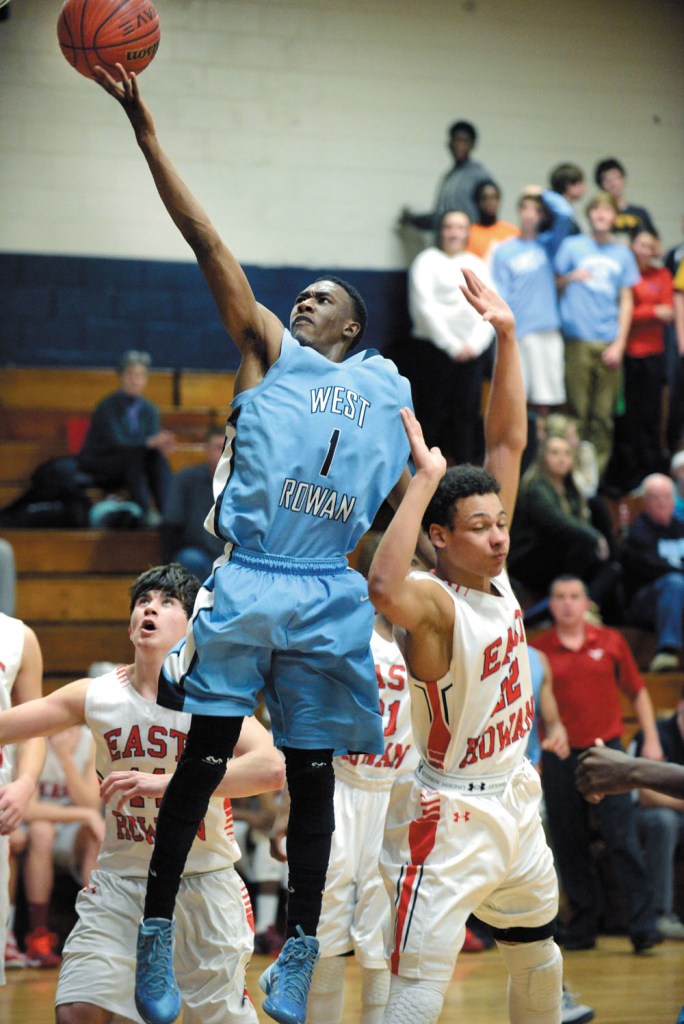 West's Celexus Long #1 shoots a one handed shoot past East's Austin Wyse #22. photo by Wayne Hinshaw, for the Salisbury Post

GRANIITE QUARRY — West Rowan coach Mike Gurley has been around so long he coached the Falcons for the 42nd time against East Rowan on Tuesday.

Gurley logged his 30th career win against the Mustangs as his Falcons breezed to a 64-44 SPC victory. Each win for Gurley boosts his county record. This was victory No. 366 at the helm of the Falcons. He won 102 games at Lexington before relocating to Mount Ulla, so 500 career victories is in sight for the bow-tie-wearing bellower.

West Rowan (13-8, 9-4 SPC) beat the Mustangs for the third time this season, controlling the boards with Caleb Mauldin and Greg Joseph, a pair with a height advantage against an East Rowan squad of 6-footers.

“We had the height advantage,” West Rowan guard Celexus Long said. “It was the job of the guards to get the ball inside.”

Long, a senior with a chance to score 1,000 career points, bombed in 19 for the Falcons to loosen up East Rowan’s defense.

“When Celexus started knocking down shots, it forced their defense to come out and opened up some things,” Gurley said.

Mauldin, a freshman, and Long had eight points each in the first quarter, as the Falcons took control 18-8. Logan Shuping hit a 3-pointer for the Mustangs to cut the Falcons’ lead to 30-22 at the break.

East Rowan went to a triangle-and-two defense to start the second half in an attempt to contain Mauldin and Long, but Joseph immediately knocked down four mid-range shots to foil that plan.

“East Rowan make a good adjustment at halftime, but the beauty of our team is that all five of our starters have the ability to have an outstanding offensive game,” Gurley said.

Joseph’s burst sparked the Falcons to a 48-33  lead after three quarters. Tay Davis led the Mustangs with 15 points, but no one ever got hot for East Rowan.

“Defensively, I thought we did the things we needed to do to have a chance,” East Rowan coach Trey Ledbetter said. “But the shots didn’t fall for us. Right from the start, I don’t feel like we shot the ball with any confidence.”

“Our main focus every day in practice is defense,” Long said. “Defense is who we are. Defense is what we stand for.”

When a shooter like Long talks about defense first, guys are buying in, but that’s usually the case for Gurley-coached teams.

“This is a unique team because we’re asking two freshmen (Mauldin and point guard Martavio Rankin) to do more than we’ve asked any freshmen to do in a long time,” Gurley said. “We’ve got the gauntlet coming up — Concord, Cox Mill and Hickory Ridge — but I like my team.”