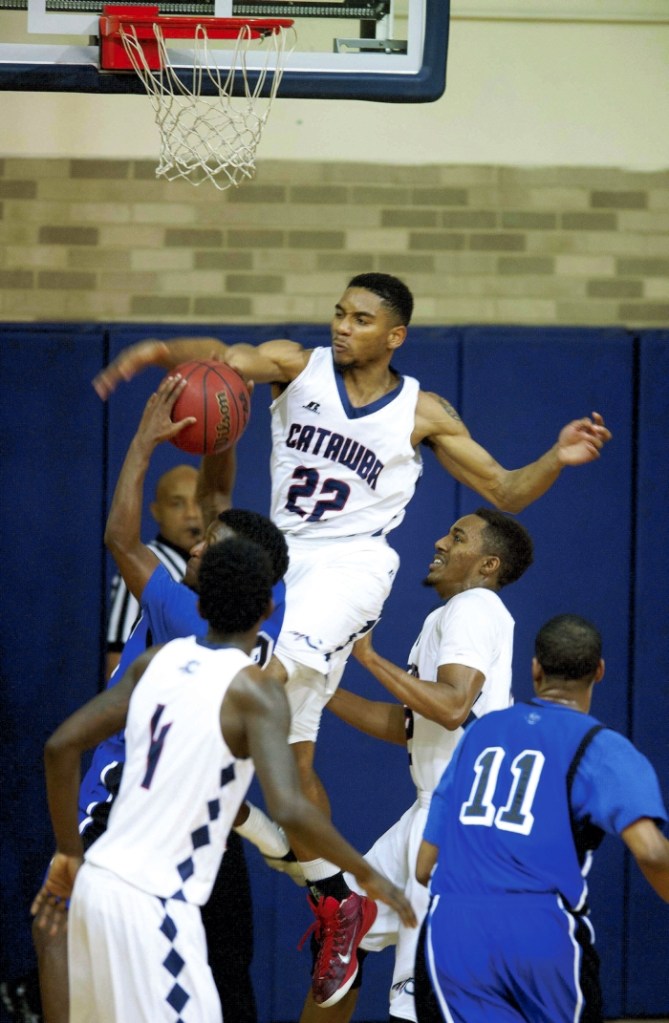 SALISBURY — It began with a near-empty gym and Catawba’s men playing their worst basketball of the season.

It ended with high-fives and jubilant shouts in front of a Goodman Gym fanbase that was going crazy.

“Like our crowd, we were late-arriving,” joked Catawba coach Rob Perron.

Better late than never.  Catawba rallied from 15 points down and beat Chowan, 82-80, in two overtimes on Monday night, with a remarkable effort, and Perron added the phrase “redemption face” to the basketball vocabulary.

A “redemption face” is what Perron saw attached to the neck of Catawba’s 6-foot-9 center Troy Warren after Warren went 1-for-8 at the foul line. Rather than benching Warren, Perron stuck with him.

“He had this very intent look — this redemption face — like he really wanted to make up for it,” Perron said.

Warren atoned for his free-throw line sins. He made Catawba’s last two baskets, making a 3-footer that provided an 80-78 lead wth 54 seconds left in the second OT. Then Warren produced the game-winning tip-in of a missed Jameel Taylor 8-footer with two seconds left.

“I felt like I let the team down and we had to go to overtime because I didn’t make free throws,” Warren said. “But I was able to get good position at the end. On the tip-in, I saw the ball coming off, but I kind of jumped past it. I was still able to get it in the palm of my hand and guide it in.”

Catawba got 28 points from electrifying freshman Jerrin Morrison, including 23 after halftime. K.J. Arrington, Vismantas Marijosius and Taylor had 13 points each. Warren had nine points and nine rebounds. Julian Sampah had six rebounds.

A couple of tough, in-the-lane, buckets by Taylor and back-to-back 3-pointers by Arrington, lifted Catawba within 42-34 at halftime.

“Chowan came out on all cylinders and they were shooting the ball great,” Morrison said. “We got on each other a little bit at halftime and decided we weren’t going to let them beat us like that in our house. We came out for the second half and got a stop, and playing good defense got me back in rhythm.”

Catawba drew inspiration from the halftime arrival of assistant coach Ben Veshi, who was involved recently in a serious auto crash.

The 6-foot-3 Morrison had been in an offensive slump for several games, but when he’s on, he’s unstoppable. He has a powerful jump-stop, pull-up jumper combination, and he started raining shots from everywhere, as Catawba charged.

“Coach (Brian) Graves has been working with me, and I’ve been shooting hundreds of mid-range jumpers — dribble left and pull up, dribble right and pull up,” Morrison said. “All that work paid off.”

When Marijosius made a free throw with 5:03 left in regulation, Catawba went ahead 60-59, the first time it had led since the opening minutes. With Catawba down two with 10 seconds left, Morrison drilled the pull-up jumper that sent the game into overtime.

Morrison had a chance to win it at the end of the first overtime, but he settled for a tough, long-range shot that missed the mark.

“We wanted to try to get something going to the basket there, and we wanted him to go with about eight seconds instead of four,” Perron said. “But the end of that first overtime was a dress rehearsal for the end of the second overtime. We showed we learned something.”

At the end of the second OT, Taylor drove and forced Hawks to come help. That opened up a rebounding lane for Warren, who swooped in for the deciding tip.

“We felt like we lost it twice, but then we won it twice,” Perron said. “I think I lost six pounds.”