Behind the scenes of wild game dinner 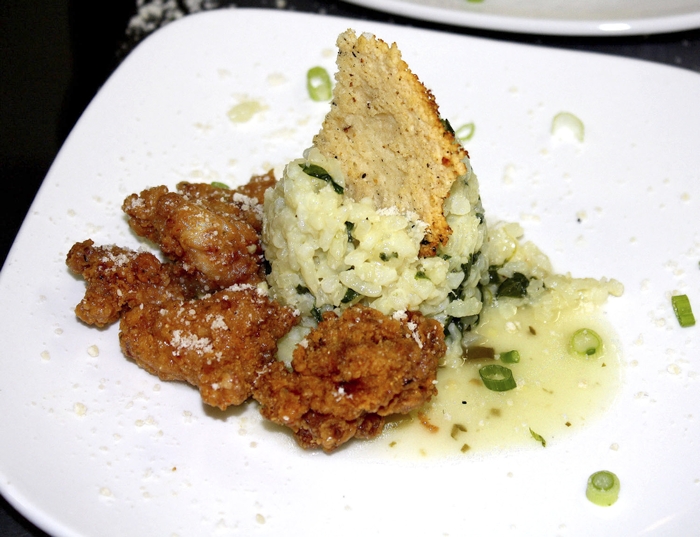 Stephen Smith/For the Salisbury Post Course two of the wild game dinner at Morgan Ridge Vineyards and Brewery, alligator scampi with risotto Florentine and a cracker of parmesan cheese.

Wild game got gussied up at a dinner and wine pairing last weekend at Morgan Ridge Vineyards and Brewery.

Chef Jason Nain let the Post hang out in the kitchen to watch the preparation and service of a four-course meal, sharing a few of his secrets. For the first course, it’s Paw Paw’s pan-fried quail with stone ground pimento cheese grits, topped with a poached quail egg, served with 2001 white syrah. Course two is alligator scampi with risotto Florentine — that means with spinach — served with a 2012 chardonnay.

For course three, Chef Jason is fixing crispy wild duck wings in a merlot thai child sauce, and serving it with purple sticky rice and tempura battered Brussels sprouts; the matching wine is a 2010 merlot. The fourth course is bison kabobs with onions and wild mushrooms and a spicy mole drizzle. To go with that, a 2011 cabernet sauvignon.

The kitchen is hot but Chef Jason keeps his cool, talking everyone through each dish, sharing preparation tips with a reporter. “See here, these onions, how it’s all brown on the bottom? I want it that way.” He adds a little water to cool it down, then stirs his boiling-like-crazy scampi sauce, which he’ll use in the second course.

“That’s got seyval blanc, shallots, garlic and parsley.” Seyval blanc is one of the white wines grown and made at Morgan Ridge.

On the side, the alligator for the second course is marinating in buttermilk. It’s been sliced and pounded thin, seasoned with hot sauce and Chef Jason’s favorite, Tony Chachere’s Creole Seasoning. The chef is from New Orleans, and his food is full of bright flavors.

Sous chef Seth Morton is busy quartering quail, no small feat when you’re feeding 40+ people. It, too, gets, a buttermilk bath.

“I learned with dinners with crazy dishes to keep it simple,” Chef Jason says. He shows off bamboo skewers of ground bison meat that will be cooked on the flat top. Every diner will get three on a bed of mushrooms including oyster, shittake and cremini.

In the food processor, Chef Jason is whirring together spiced pecans which were made with butter, salt and pepper, granulated onion, garlic, cayenne, cumin, chili powder and a little brown sugar. He mixes it with flour and Morgan Ridge’s Arrowhead Ale for a tempura batter for the Brussels sprouts that will be served with crispy wild duck wings.

“You want it so thin, you can almost see through it.”

He next adds brown sugar, malt vinegar and molasses to his caramalized onions, along with Midnight stout, also made there. “This is called a ‘liaison.’ It pulls thing together.”

He checks on the risotto. Don’t you have to stir constantly? “Ain’t no one got time for that,” he laughs. Cheese goes into the grits, along with roasted pimentos.

They’re ready for the first course, the quail. Everyone gets two pieces of quail. With this course, they sip a 2011 white syrah, chilled. The key is breaking the yolk of the poached egg and stirring it into the grits.

There’s never a sense of frenzy in the kitchen, though a lot is happening at once. Everyone multitasks. A lot of what happens in the kitchen is counting. How many duck wings, how many Brussels sprouts per plate.

Chef Jason pauses to tell Kim Love that she needs to ask diners if anyone is allergic to nuts, since they’re in the tempura batter. No problems. By now, the purple rice is ready, and it goes with the crispy wild duck wings. It goes on the plate first, then the wing, then a base of the oniony-beery liaison, topped with three Brussels sprouts and some crispy fried Brussels leaves.

Anyone who has ever hated Brussels sprouts must try this preparation. This course is accompanied by a 2010 merlot, to stand up to the strong flavors.

Almost before you know it, the bison kabobs for the fourth course are sizzling on the flattop and the aroma of mushrooms cooking in butter fills the back of the kitchen.

This is served with a 2011 cabernet sauvignon. The deep red wine goes well with the earthy food.

The diners are laughing and talking, and it’s already time to get dessert. Sitting on a rack in the kitchen are almond tuille cookies, see-through, lacy cups that will hold chocolate mousse with a hint of cayenne pepper. Morton made those.

Down go the plates again, 4, 8, 12 … 40. Squirt of mousse from a piping bag to hold the tuille in place, cookies down, mousse swirled in, topped with sliced raspberries and a sprinkling of powdered sugar. The cabernet goes well with the dessert too; it likes chocolate.

A sigh comes from the kitchen, then Morgan Ridge owner Tommy Baudoin dragging Chef Jason out for a round of applause. Nain introduces and thanks Morton and Almond, then the servers, Love, Deborah Graden, Jennifer Osian and Anna Lowe, and the Baudoins. Amy Baudoin grows the grapes, Tommy makes the wine. Chef Jason loves what he’s doing and the chance to teach others everything he know about food.

He heads back to the kitchen to check his menu for Sunday brunch. He’s going to the beach; Seth’s in charge. “He’ll do great,” Chef Jason says, and he goes outside to cool off and relax. Everything went according to plan.