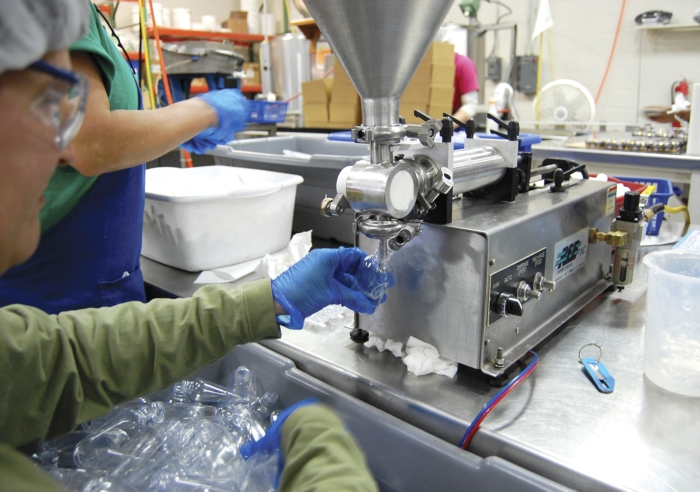 ROCKWELL —  A small manufacturing company in this small community is continuing to grow and continuing to help members of the military.

A person could pass FillTech USA on West Main Street without giving the place a second thought, but inside is a thriving business employing dozens of people. And last week it donated 79,000 tubes of lip balm — $170,000 worth — to members of America’s armed services.

FillTech manufactures products ranging from lip balm to hand sanitizer and employs 46 people. In 2008, the company was set to close before Dennis and Cookie Jones bought it.

Each stage of production, from blending the raw materials to packaging and shipping, happens in Rockwell.

“We just felt the Lord was giving us the opportunity to be a part of helping to rebuild a community and provide jobs for the people here in Rockwell.” Dennis said.

He and his wife have spent their lives doing missionary work around the world. They’ve worked in Russia, Africa, China and India.

But Dennis said there are communities all over America that need help, too. And Rockwell is where he and Cookie decided to leave their mark.

The couple split their time between Rockwell and their home in Virginia Beach.

When they bought the business in 2008, it had 12 employees working in a single building. Today, the company occupies more than 30,000 square feet of space, spread over multiple buildings, and it recently purchased 18 acres of land in anticipation of future growth.

“We’ve never had a sales force here. Business has just been word of mouth. One person we manufacture for shares it with another person who needs manufacturing,” Cookie said.

FillTech USA has 1,300 labels and does business with some of the country’s largest pharmaceutical companies, Dennis said. Filltech USA owners Dennis and Cookie Jones saved the company from closing in 2008 and have turned it into a successful, growing business. The company has made several donations to military personnel and last week donated 79,000 tubes of lip balm to men and women in the armed services.

In 2008, FillTech teamed up with local veterans’ advocate Rodney Cress to donate lip balm to soldiers in Iraq and Afghanistan. Since then, the company has been making donations about once a year.

Dennis said it’s just their way of giving back to military members for all that they do.

Cress is an Army veteran. He was a platoon sergeant in Vietnam.

In the past, he said, he’d pick up the donations from FillTech and go from there. But this year was a little different. He had to coordinate for the lip balm to be picked up from distribution centers in Florida, California and Hawaii.

“I had to round up some people that I knew and get some names and kind of go from there,” he said.

Cress has been helping veterans for over 20 years. In 2012, he was awarded the Bronze Star Medal with Valor device from Senator Richard Burr.

Cress said he’s proud of his service in the military and proud to help those who are serving today.

“It’s great that I have the opportunity to serve the men and women who serve,” he said.

The current donation will go to service members in Florida, California and Hawaii.

Cress called Filltech an “admirable” and “patriotic” company, and he said Rowan County is fortunate to have the business here.

Capt. Amy Green, Family Programs director for the Florida National Guard, said the donations are extremely important and always appreciated by people in the military.

It lets them know the communities they serve care about them and what they’re doing, she said.

Lip balm is always something in demand from military personnel, especially if they’re deployed overseas. Green said the donations she receives will go to people in all branches of the military.

She said the main focus of her program is to be a support network for service members and their families.

Back in Rockwell, Dennis and Cookie said the Lord has blessed their business and that they just want to be able to give back in any way they can.

They plan to donate a home on property they own next to the factory to the Nazareth Childrens Home.

“The Lord just gave us a vision when we came here,” Dennis said.