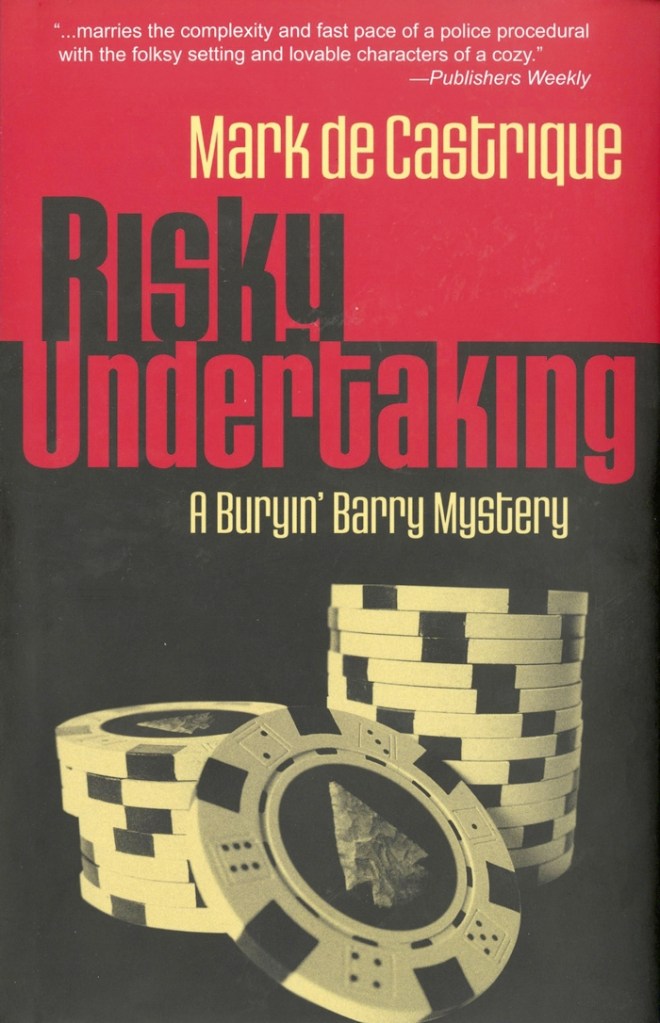 Mark de Castrique, who will be one of the featured authors at the Rowan Reading Rendezvous on March 21 at Rowan Public Library, has a new mystery featuring his character Barry Clayton, “Risky Undertaking.” The title has several meanings, all laid out in this book.

Barry is a part-time sheriff’s deputy and a full-time funeral home director in the small town of Gainesboro, N.C.

De Castrique has been writing a series featuring Barry and the mountains of North Carolina for several years. You don’t have to worry about jumping in here, de Castrique gives you enough background that you’ll know who you’re dealing with.

And there’s lots of people in this book, lots and lots, which can be a little confusing sometimes. Make yourself a cheat sheet.

The story ranges over many issues while introducing a goodly number of red herrings to trip up the reader along the way.

Just when you think you’ve found the path to the killer, the author takes you down another one, brings in more suspects and casts doubt on what diligent Barry and his cohorts have already found out.

Barry has his good buddy Sheriff Tommy Lee working with him, and a mountain of a Cherokee, Romero, backing him up. Also along for the ride is a Boston cop with vengeance on his mind, Kevin Mallone, and a hit man, Frankie Tyrell who has ties to Whitey Bulger.

So, you see, this is not just small-town crime. De Castrique has involved Gainesboro, the Cherokee, casinos, state legislatures and organized crime.

It starts out with a new cemetery that Cherokee Jimmy Panther objects to — as soon as remains are found on the grounds. It quickly escalates to murder, conspiracy and the ruin of a once-respected family.

Not only is Barry involved in a funeral, he quickly becomes involved in the ensuing murder and the disappearance of certain people who may or may not be involved in the placement of a controversial Catawba Indian casino in Cherokee. And there’s a possibility Cherokee artifacts have been moved to slow down property development. And there’s greed motivating much of what goes on.

It looks like Luther Cransford’s family is cursed, at least, or guilty as sin. Luther’s wife Eurleen is the mayor’s sister, and her death begins the twisted tale. When someone else shows up dead on top of her grave, Barry doesn’t just have more business, he has a criminal investigation on his hands.

And there’s still the issue of the Cherokee remains. Soon Barry discovers a proposed casino, which would bring in millions of dollars and hefty payouts to the Cherokee, is bringing out the worst in the interested parties who will do anything to build the casino or anything to stop it.

Then the hit man shows up, taking the investigation is a direction that only increases Barry’s suspicions. Another murder occurs and a boy disappears and the stakes in this game grow higher and higher.

Barry risks his life to find and save the boy, in turn exposing the real killers and the motivation behind all that has happened. It’s a sad day, indeed, for Gainesboro.

De Castrique really keeps up the pace, then creates a fast-paced conclusion. His other books feature Sam Blackman and the history of Asheville. De Castrique creates characters you’ll enjoy visiting from time to time, and settings that are familiar.