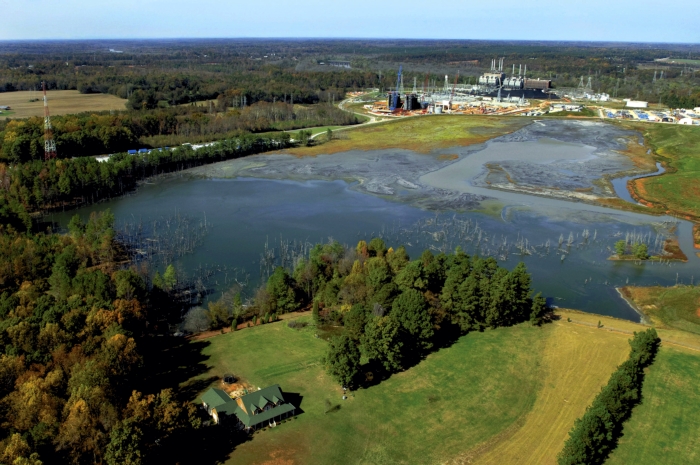 JON C. LAKEY / SALISBURY POST An November 2010 aerial photograph of the first holding basin that was being used to hold the by products from the coal fired Buck Steam plant seen in the background. Currently the plant is offline and no longer discharging into the basin.

After five decades of storing coal ash next to the Yadkin River, sweeping state legislation and an environmental disaster on the Dan River, permanent plans for the six million tons of dark, gray matter in ponds next to Buck Steam Station remain undecided.

For now, Buck’s coal ash remains in limbo. The North Carolina General Assembly passed sweeping coal ash legislation last year, just months after a spill on the Dan River dumped tens of thousands of tons of coal ash into the water. The legislation imposed rules about the future of coal ash management and set up a commission appointed by legislators and Gov. Pat McCrory.

The legislation also required the Department of Environment and Natural Resources to divide sites into high-, intermediate–, and low-risk categories. Coal ash from both high- and intermediate-risk sites both would require placement in a lined landfill. Low-risk rites could be capped in place.

With the one-year anniversary of the Dan River spill on Monday, only one part of action mandated by legislation has begun — private well testing. And, despite concerns about the Yadkin River’s contamination from environmental groups and local residents, other measures, such as the removal of coal ash from ponds, are months or even years away. If Buck Steam Station is deemed a high-risk site, coal ash must be excavated by 2019. If it’s deemed an intermediate risk site, the same would have to occur by 2024.

Just below the surface

Duke Energy first commissioned Buck Steam Station in the mid 1920s. The plant sits on the banks of the Yadkin River, surrounded by Dukeville — the name of the surrounding community deriving its name from the original mill village.

Duke’s complex on the Yadkin — which includes the Buck Steam Station — measures 684 acres in size. A combined-cycle, natural gas facility, capable of producing 620 megawatts of energy, comprises a small portion of the total complex, with ash ponds and the coal plant making up a much larger part. The coal-fired plant, capable of producing 256 megawatts, was retired in April 2013.

Duke employees at the Rowan County facility say the ash ponds — two of which are covered by grass and foliage — are monitored daily. Two of the ponds look like a typical lake on the surface and Duke employees pointed out birds and wildlife on the two lake-like ash basins during a tour of the facility.

Beneath the surface of both earth and water sit more than six million tons of coal ash. The ponds were a method of coal ash disposal at Buck Steam Station from 1957 until 2013.

Monitoring conducted at the coal ash ponds shows nearly 20 different chemical compounds. Perhaps the most controversial and dangerous of the bunch, arsenic, is shown in varying amounts on test results submitted to the Department of Environment and Natural Resources.

The level of arsenic contained in coal ash lies somewhere in between ground soil and household waste, said UNC-Charlotte engineering professor John Daniels, whose research has focused physical and chemical controls on soils and industrial byproducts.

“Coal ash comes from coal, and what’s coal? It’s pre-historic vegetation,” Daniels said. “So, it’s mostly carbon and you burn the carbon and what you’re left with is what didn’t burn.”

He said coal ash, depending on the origin of the coal, contains less than 1 percent of materials such as arsenic. Lead and mercury also pop up on Duke’s test results at Buck Steam Station.

Chemicals and the mere presence of the ash ponds next to dozens of homes have caused concerns among local residents and environmental organizations.

Local law firm Wallace and Graham represents many of the families who live near the Buck Steam Station ponds.

“They live very close to the ponds and are very concerned about their drinking water and their health,” said local attorney Mona Wallace in an email.

No lawsuit has been filed yet concerning water quality, according to Wallace.

“It was deeply unsettling to find that known coal ash contaminants have been leaking directly into the Yadkin river below the waterline for an undetermined period of time,” said Yadkin Riverkeeper Will Scott when the test results were released.

Duke disputed the Yadkin Riverkeeper’s claims, conducted its own testing and said its tests only showed “exceedances” in two categories, iron and manganese.

With a slow-moving river and slow seep of coal ash into river water, Daniels said concerns about contamination would be greater than a river that flows quickly.

“If you have coal fly ash and it’s mixed in water, it’s reasonable to expect some leaching,” he said. “Now the next question is does it matter and that’s a question of how much is leaching.”

Coal ash in water is just one way health concerns could arise. A report by the Electric Power Research Institute, which Duke is a member of, cited windblown transport as another way coal ash could enter the human body.

“Potential exposure to the constituents in coal ash can occur through a number of different pathways,” the report stated. “For example, windblown transport of fly ash from uncovered landfills is one potential exposure poathway. Windblown ash can lead to exposure via absorption through the skin (dermal contact), inhalation (from breathing) and incidental ingestion (the non-intential oral ingestion that could occur through the touching of hands partially covered with fly ash to lips and mouth).”

Regardless of concerns, neither DENR nor the Coal Ash Management Commission have made a decision about how Duke should proceed in managing its ash ponds on the Yadkin River. Duke Energy spokesperson Erin Culbert says the company plans to continue forms of testing and site-specific engineering. Culbert said Duke would adhere to rules outlined in the Coal Ash Management Act and couldn’t act unilaterally in closing or excavating ash in Rowan County.

“All of us really want a quick and simple solution and it’s important that we get it right,” she said.

The most recent discussion among members of the Coal Ash Management Commission, which held its latest meeting in January, concerned reusing ash in construction projects.

For its part, Duke recycled 43 percent of coal ash produced in 2014, according to Culbert. The percentage of recycled ash doesn’t include any ash sitting in ponds across the state.

One example of Duke’s reuse is at the Asheville Airport, where coal ash was used to help create flat land for a new taxi way.

Before any decision is made about the future of Duke Energy’s millions of tons of coal ash, Chairman of the Coal Ash Management Commission Michael Jacobs during the January meeting said the board’s members would first gather as much data as possible.

In a previous interview with The Salisbury Post, Scott called discussion on recycling coal ash an “industry greenwash.” Others say recycling the ash is better than shipping it to landfills or leaving it as is.

“You can take a foot of ash and place it just about anywhere and have virtually no impact,” Daniels said. “Now, if you have 75 feet of ash it’s maybe going to have an impact … At the end of the day, if you consider it to be a construction material and if you reuse it according to engineering guidelines, I don’t see a risk greater than any other construction material.”

The oldest of the ash ponds at Buck Steam Station is now covered by a thick forest-like environment. A park used once per year by local elementary school students sits adjacent to the oldest pond and the third active pond of the three-pond system.

Daniels said data and testing results should drive the decision on whether to haul ash from Buck’s ponds to a lined landfill, cap the wells in place or use it as construction material.

“If you’ve got that waste, your first object ought to be to reuse it,” he said. “If you really can’t use it, then ok fine. Then, you’ve got to find a way to safety prevent it from having an impact on human health or the environment.”

On his sax, Zirt still keeps up with the…