On his sax, Zirt still keeps up with the young guys 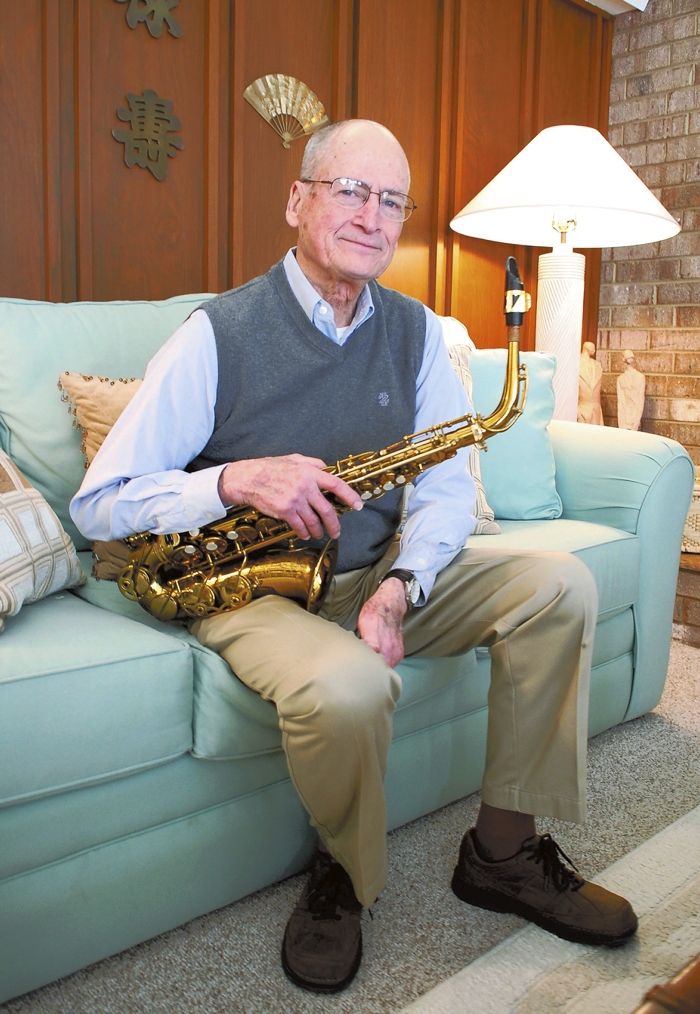 SALISBURY — Although he just celebrated his 80th birthday, Bob Zirt still works full-time at North Pines Inc., a wholesale clothing company he founded and now runs in partnership with his son, David.

Almost every evening, unless his lips are sore or wife Judy has made other plans, Zirt also fills his home in Country Club Hills with the sounds of his saxophone.

“You have to when you get old,” Zirt says of his constant practicing. “You have to keep up with the young guys.”

Zirt plays in a room off the hallway that he calls his music room. It looks more like an office, and Zirt’s desk is usually littered with reeds and sheet music.

He often plays his saxophone in accompaniment to a tape recording, and Judy says it sounds like an orchestra has camped out. If the telephone rings, she has to move to a distant part of the house to be able to hear the conversation.

Zirt holds down the first alto saxophone spot in the 18-member Salisbury Swing Band. You can find him in the front row, often behind leader/trombonist Steve Etters and vocalist Laura Millspaugh. The band practices every Tuesday night at Catawba College, where Etters is coordinator for music education.

“I have more fun now than I did when I was a kid,” Zirt says.

Much could be taken from that statement. You see, Zirt became an accomplished, professional saxophonist in high school and college. But one day, near the end of his college days at Syracuse University, he stopped playing, put his saxophone and clarinet in their cases and stored them away.

He would not play his saxophone again for 50 years.

Zirt’s musical journey begins in Ellenville, N.Y., in the heart of the Catskills, famous in its day for hotels, resorts and shows — the place where city dwellers in New York traveled for weekend escapes or whole families might spend their summers..

Zirt’s father worked in a factory, and his mother, a homemaker, wanted her son and daughter to gain an appreciation of music early, so she required both to take piano lessons. As a young teen, Zirt tired of the piano and begged permission from his mother to try another instrument.

An uncle ended up arranging it. He made connections with Joe Glider, the lead alto saxophone player for a hotel band in the Catskills, and Bob was soon taking hourlong lessons on the sax from Glider. “He was a really good man,” Zirt says.

Zirt adapted to the saxophone quickly, and in high school, before he and some other musical friends could drive, they formed a band called the “Swingopaters” — or maybe it was “Swincopaters,” Zirt says. They often played in little auditoriums calls casinos, mostly on the weekends, and Zirt’s father would drive the band members to their gigs.

Swing music remained highly popular then, and Zirt recalls playing a lot of Glenn Miller songs, among others. He’s still playing some of those tunes today.

In 1953, Zirt had to join the musicians’ union. If he hadn’t, he could not have played at any hotel or resort in New York. Thanks to Glider, Zirt was soon playing saxophone in the Art Kahn Band, the house orchestra for the Nevele Country Club — one of the popular hotels in the Catskills.

Friday nights were usually a dance night. Saturday nights included dancers, singers and comedians of the day, such as Buddy Hackett and Jackie Mason. Each act brought its own music, which was often thrown at the band members right before a show.

“That was pretty tough for a kid,” Zirt says.

By 1954, Zirt bought his own saxophone with money he had earned playing shows. It cost $600 then, and it’s the one he still uses. After high school, the Swingopaters disbanded, and Zirt kept playing at the Nevele Country Club during summers, making about $50 a week.

“It didn’t put me through college or anything,” Zirt says.

A Syracuse, Zirt was a business major. He played clarinet, which has similarities to the saxophone, in the Syracuse marching band. He also performed in a college orchestra. But by his senior year at Syracuse, “I kind of cut back,” Zirt says.

“I don’t know, maybe I played myself out.”

Part of the reason might have to do with his father. Before enrolling at Syracuse, Zirt had wanted to attend music school, but his father said he wouldn’t pay for it because he thought Bob could never make a good living as a musician.

“It was drummed into me as a kid that music was like fooling around,” Zirt adds.

By the time he graduated Syracuse in 1957, Zirt had stopped playing. The company he went to work for as an industrial engineer, H. Rosenstock & Sons, sent him south to Salisbury to work in the Leisure Lads plant, which made children’s clothing.

Zirt stayed with Leisure Lads until 1965 and eventually became plant manager. His own businesses would follow, including Dressmaker Fabrics. Malone’s, B&J Gift Wrap and North Pines.

Zirt built his Country Club Hills house in 1971 and married Judy, his second wife, in 1982. She heard, of course, Zirt’s stories about growing up and going to school in New York. She saw him fiddle around, but rarely, with their piano, but she never heard him play a saxophone for at least the first 20 years of their marriage.

Zirt had stowed away the instrument in the furnace room of his house, and it stayed there untouched for decades.

One day about 10 years ago, Judy retrieved the saxophone case and set it out in the den. Zirt passed by it for three weeks without ever showing an interest, and Judy was about to put it away, acknowledging that her bait had failed to attract the fish.

But one Sunday afternoon, Dr. Victor Rosado, a musician friend of Zirt’s, visited the house to watch a football game. The saxophone case caught his eye, and soon he and Zirt were on the floor opening the case and taking out the old sax.

“I think I blew it that day,” Zirt says, recalling that he couldn’t find a reed. But Rosado’s visit made Zirt curious as to whether he could still play the instrument.

“I was amazed,” Judy says of the music that started coming from Zirt’s saxophone. “I’m really proud of him. There’s been music in my home ever since.”

About six months after taking his saxophone out of its case again, Zirt accepted Rosado’s invitation to join him at a practice of the Catawba College Community Band. Zirt became a band member almost instantly, and the group soon evolved into the non-profit Salisbury Swing Band. Whatever the band is paid for its performances, the money goes back into the group’s expenses and equipment needs.

It’s the group which warms up the Pops at the Post crowd and plays at the annual National Sportscasters and Sportswriters Association banquet. It also performs private and public gigs at reception halls, shopping centers, parks, country clubs and vineyards.

Upcoming events for the band include a Valentine’s Day Dance at Holy Spirit Catholic Church; the “Swing, Bling and Black-Tie Bingo” at the Hotel Concord; the 26th Annual Spring Celebration at Hurley Park; and a June wedding at the Rowan Museum.

The band stays busy. Zirt recalls a recent year when it had 30 different gigs.

Despite his long-delayed reconnection with the saxophone, Zirt isn’t exactly a late bloomer. One of the founders of the Salisbury-Rowan Runners Club in the early 1980s, he has always been in good physical shape.

Zirt swims at the YMCA and intends to start running again this spring.

Does Zirt have any regrets today that he waited so long to pick up the saxophone again? Yes and no, he says. He knows he missed a lot of years with a close friend, but the timing couldn’t have been better in finding a group to play with such as the Salisbury Swing Band.