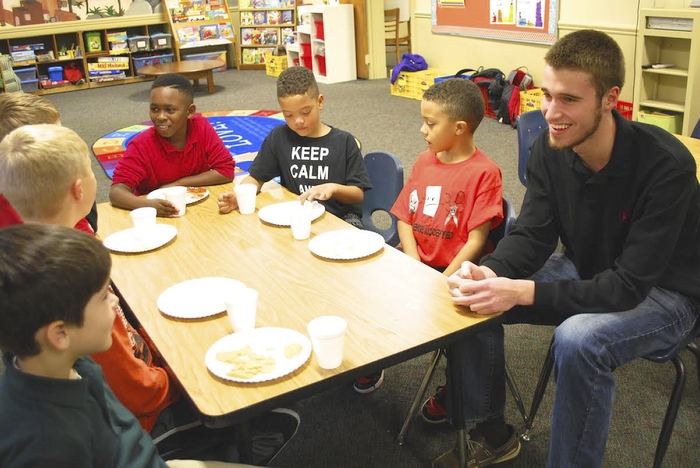 Wes Fazia, an eleventh-grader and basketball center at Salisbury High, interacts with elementary-aged children at First United Methodist Church of Salisbury's After-School Child Care program. 'He could be doing a lot of other things, but he comes here and volunteers faithfully,' said Garretta Rhames, program assistant teacher. Elizabeth Roy/For the Salisbury Post

But when Wes showed interest in volunteering at his home church’s after-school program for elementary-aged kids, he set himself up for an applause of a whole different kind.

Drawn to the volunteering for its flexibility – two nights a week, whichever days are best for him – and his love of kids, Wes began volunteering for First United Methodist Church of Salisbury’s after-school program this past summer.

“There is a cheer that comes out in the room when Wes walks in,” said Betty Slife, lead teacher for First United Methodist’s After-School Child Care program. “The kids love him.”

For the 25 children in the program, Wes is a tutor, a friend and a mentor.

“They look to him as a role model and playmate all in one,” said Assistant Teacher Garretta Rhames. “Wes really gets down on their level.”

Both Betty and one of her assistant teachers, Donna Frederick, were previously student tutors in reading and math at Faith Elementary for 10 years before joining the after-school program at First United Methodist. Together the women deliver a designated tutoring time that pays close attention to each child’s unique educational needs and homework assignments. In some cases, Betty and Donna even communicate directly with the children’s elementary teachers.

To assist the after-school program teachers, Wes jumps in and guides the children through a variety of tutoring activities and exercises.

“It’s whatever their homework is for that night,” said Wes. “I’ll do it with them.”

Already this school year, Wes has served as a catalyst for progress in the children’s academics. Take 7-year-old Ryan Morales, an eager sidekick and reading buddy of Wes’s, for example.

“When we first started reading, Ryan was a little shaky, didn’t like to do it,” said Wes. “But now I can tell he’s really starting to enjoy it.”

For students like Ryan, Wes’s involvement helps them build social skills as well. When they’re not studying, the children in the after-school program are playing games, building, cooking and recreating outdoors. This provides a wealth of opportunities for interaction and emotional growth, along with a setting for Wes’s modeling to really stand out.

Wes serves as a behavioral guide and teaches the kids what it’s like to be a teenager, Betty says.

“The kids will ask Wes, ‘How was your day?’ ” said Betty. “They’re learning how high school is going to be when they get there.”

Being a star to 25 kids comes with its benefits.

“They make my day every time I come here,” said Wes. “I just love it.”

That said, a strong influence like that which Wes has on the children comes with great responsibility, too.

“Knowing that I’m a role model to them inspires me to be the best role model I can be,” said Wes.

This past Christmas, Wes brought in Christmas presents for all of the children – race cars for the boys and ponies for the girls.

“They just got a big grin on their faces,” said Wes, recalling the kids’ squeamish joy.

In addition to basketball and his volunteering at First United Methodist’s after-school program, Wes is a member of Salisbury High School’s Latin Club and Key Club.

“He could be doing a lot of other things, but he comes here and volunteers faithfully,” said Garretta.

As an 11th-grader, Wes has some time to figure out where he will attend college. Looking ahead, Wes says that communications and sports marketing are the fields that he’ll likely pursue.

“My family is made up of big Wake Forest fans, so we love that college, but I’m not sure right now where I’ll go,” said Wes.

For the next year and a half until he graduates, Wes plans to continue his volunteering with the children. And Betty, her fellow teachers, and the children could not be more thankful and elated to have him on board.

“It’s a great problem to have when all of the kids want to sit with Wes,” said Betty. “He’s touching their hearts.”