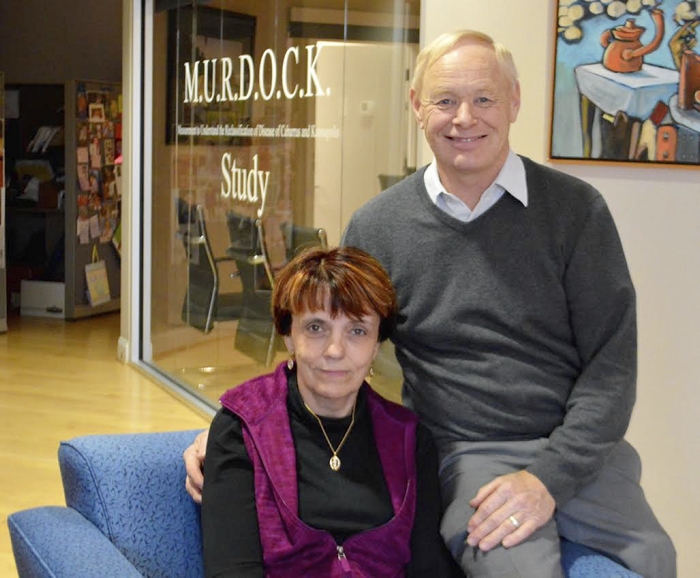 John and Linda French are looking forward to participating in the MURDOCK Study, which has been expanded to include Landis and China Grove residents. Submitted photo

Ever since learning about the MURDOCK Study several years ago, the Frenches have wanted to enroll. They’ve never missed Walk With a Doc — a free monthly event co-sponsored by the MURDOCK Study and Carolinas HealthCare System’s Sanger Heart and Vascular Institute—and they are keenly interested in health and medicine, a result of John French’s four-way bypass heart surgery in 2013.

They have family histories of cardiovascular disease and cancer and believe their biological samples and health information could be valuable to the MURDOCK Study, which has more than 11,100 volunteer participants.

But until recently, the Frenches could not enroll. They did not live in the catchment area, a specific geographic boundary that defines the study’s population.

That changed when the MURDOCK Study expanded the catchment area to include Landis and China Grove. The Frenches said they plan to be among the first study participants who hail from the MURDOCK Study’s new zip codes, 28088 and 28023.

“People in Landis and China Grove need to be able to participate. We can practically throw a rock and hit the research campus,” John French said. “If you can get the old-timers to come in and have their children come in, they can maybe stop a disease or help future generations.”

French was so passionate about wanting his fellow southern Rowan County residents to have access to study enrollment that he helped convince Dr. Kristin Newby, a Duke cardiologist and principal investigator for the MURDOCK Study, to expand the catchment area. He strolled alongside Newby during Walk With a Doc in October at the research campus, and his enthusiasm for the study and improving human health was clear.

The Frenches are not alone in their desire to enroll. China Grove and Landis residents have shown strong and persistent expressions of interest in the study since its inception in 2007, and the Duke Translational Medicine Institute office in Kannapolis has a waiting list of hundreds of south Rowan residents eager to participate.

While the scientific design of the MURDOCK Study requires a limited geographic area for enrollment, the time was right to expand to Landis and China Grove, Newby said.

“People in Landis and China Grove for years have expressed interest in Duke’s work at the North Carolina Research Campus because these communities have a connection to Kannapolis,” Newby said. “Many people work, shop, worship and receive health care here, and many worked in the former Cannon Mills plant where the research campus now stands. It makes sense to include them, given these ties.”

Now, adult residents in 20 zip codes, including 28023 in China Grove and 28088 in Landis, can join the MURDOCK Study, which includes all of Kannapolis and Cabarrus County and portions of Stanly and Mecklenburg counties, as well as some additional parts of Rowan County.

This marks the first expansion since 2010, when the study boundaries grew beyond Kannapolis and Cabarrus County to include the zip codes that touch Cabarrus County.

“We are thrilled to announce this exciting development and proud to welcome China Grove and Landis residents to the MURDOCK Study family,” Newby said.

The enrollment process starts by calling 704-250-5861, emailing murdock-study@duke.edu or clicking “enroll now” at www.murdock-study.org. Participants make an appointment at one of nine convenient locations, including Kannapolis Internal Medicine at 201 Dale Earnhardt Blvd., the enrollment site currently closest to Landis and China Grove.

Participants should not expect to receive individual medical test results and are compensated for their time.

Duke is working to enroll 50,000 people the MURDOCK Study’s Community Registry and Biorepository. Researchers need health information and biological samples as they work to reclassify disease using advanced scientific technologies available at the North Carolina Research Campus. The biological samples are stored in a state-of-the-art facility in Kannapolis, and Duke researchers and their collaborators are using the specimens to help identify links across major diseases and disorders.

They hope to find ways to treat and even defeat some of today’s leading causes of illness and death while tailoring medical treatment based on individual characteristics, also called precision medicine.

Since John French’s bypass surgery, the couple, who will celebrate 43 years of marriage in April, has changed their lifestyle significantly. They work out every day at a cardiac rehabilitation center and thank Sanger cardiologist Dr. Paul Campbell and Mike Lippard, the former manager of Carolinas Medical Center-NorthEast’s Health & Fitness Institute, for improving their health.

“I’m way healthier and more active than my parents ever were,” Linda French said.

“That just goes hand-in-hand with the MURDOCK Study. We’re concerned about our health,” he said. “Ten years ago, I would not be talking like this. I would just go to McDonald’s.”

Originally from Massachusetts, the Frenches visited North Carolina nearly 20 years ago, fell in love with the area and relocated. John French, who served in the military for 22 years including the Air Force, Air National Guard and Army Reserve, was repeatedly hospitalized as a child for mumps, measles, chicken pox and other ailments. He remembers living in an oxygen tent and missing months of kindergarten and first grade.

He eventually regained his health but shudders to think about all the environmental hazards common at the time, like pollution floating in the Charles River and lead paint. He remembers banging on the pipes in his basement to make it “snow.”

“It was asbestos,” he said.

The Frenches said they plan to encourage their children, ages 34 and 39, to join the MURDOCK Study as well.

“Maybe there will be a situation where our participation will help, down the road,” John French said.