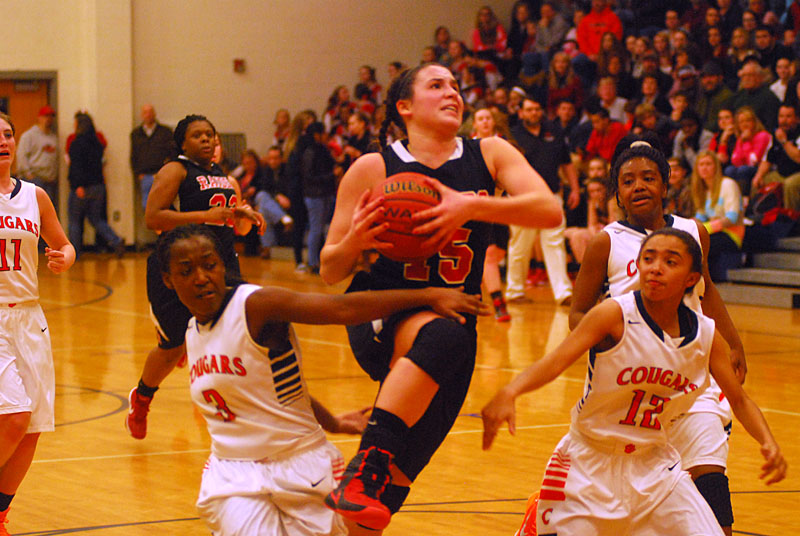 Adam Houston/The Salisbury Post South Rowan's Avery Locklear (15) muscles her way through the defense of Carson's Olivia Gabriel (3) and Taylor Wiggins (12) on Friday in the first half of a South Piedmont Conference game at Carson. Lockelar scored and drew a foul on the play.

CHINA GROVE — South Rowan’s alarm clock must have been set for the third quarter Friday night.

The Raiders voided a listless first half, dominated the third period and rolled to a 51-40 SPC victory at Carson.

“Its almost looked like we just woke up,” coach Jarrod Smith said after South (14-5, 11-2) won its fifth straight and remained tied for first in league standings. “Defensively we looked sluggish in the first half. In the second half we just turned it up.”

Sparked by diminutive senior Sylvetta Bost, the Raiders scored the first 15 points of the second half and built a 35-20 lead. Bost had three baskets in the spurt, teammate Caroline Hubbard added two key buckets and slowed-by-injury Cassidy Chipman (sore back) scored on a floater down the lane and a 3-pointer from the top of the wheel.

“At halftime we knew what we had to do,” Bost said after netting a team-high 13 points. “We needed to wake up and push ourselves to our potential.”

Carson coach Brooke Misenheimer said the Cougars played a terrific first half — limiting South to five field goals and jogging to their locker room tied 20-20. “But we couldn’t take advantage because we couldn’t make shots,” she noted. “We had opportunities. We had open shots. We had layups. We just couldn’t hit them.”

Neither could South. Senior Avery Locklear, the county’s leading scorer this winter, was held scoreless in the opening period and finished with 12 points and nine rebounds. Chipman’s first basket came with 1:12 remaining in the first half. She soldiered on and totaled 10 points and 11 rebounds.

“Nothing was clicking in the first quarter,” Locklear said. “By the second half of the second quarter we started picking up speed. We knew we had to make some kind of statement and if we let them hang around it was going to be tough.”

South finally surged ahead late in the half when Locklear converted both ends of a one-and-one with 1:06 on the clock. Seconds later Hubbard stole an inbounds pass, was fouled and made two free throws to the Raiders up 20-14. Carson closed the half on q 6-0 run, fueled by Alex Allen’s three-point play and Chrishona Roberson’s banked-in 3-pointer as the buzzer sounded.

“We were really intense and ready for this game,” Allen said after scoring a game-high 17 points. “But in the second half our defense just wasn’t as good. Even when Avery and Cassidy weren’t getting opportunities, Sylvetta stepped up and kept them in the game.”

Then came South’s third-quarter explosion, a 15-0 run accomplished in less than four minutes. “It was a whole different ballgame,” Locklear said. “We were a whole different team. We’ve played together long enough to know when to buckle down and go for the win.”

South led by as much as 42-22 after Malaysia Williams buried a 3-ball late in the third quarter. Carson trimmed that deficit to nine when Allen drained her second 3-pointer in the waning seconds.

The Raiders share the SPC’s top perch with East Rowan with three conference games remaining. “The picture’s getting bigger and bigger,” Smith said.